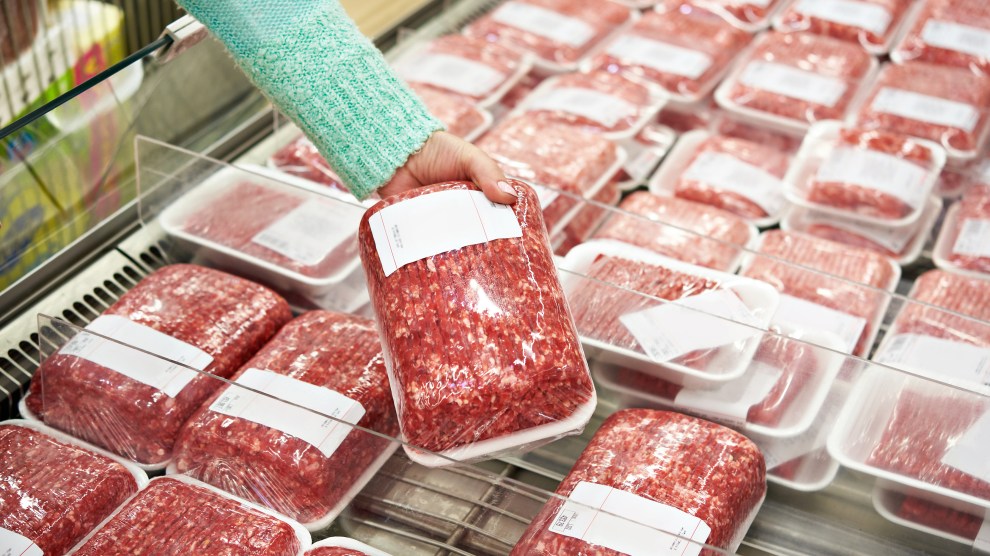 Update 2:30pm ET Wednesday, June 28, 2017: After an 18-day trial, Beef Products Inc., privately settled its defamation case against ABC News for an undisclosed amount. Jim Avila, the ABC correspondent who covered the 2012 “pink slime” story, told reporters “it’s important to note we’re not retracting anything or apologizing for anything.” A spokeswoman from ABC news said settling the case was in the best interest of the network.

Remember pink slime? The gross term was all over the news five years ago when ABC News reported on processed meat trimmings that end up in ground beef consumed by Americans.

In 2012, Beef Products, Inc., the manufacturer of this substance, sued ABC News for its reporting, which it called defamatory and misleading. The report aired a few months after McDonald’s, Burger King, and a few major grocery chains stopped purchasing BPI’s product. A few years later, the company’s revenue had dropped by nearly 80 percent. BPI has since closed three of its four plants and laid off more than 700 employees. The case went to trial this week in South Dakota.

So what exactly is the stuff known as pink slime? And is it as gross as the media has claimed? The ground beef filler—technically called lean, finely textured beef (LFTB)—is made by putting leaner meat trimmings (think excess trim below the hide, or other non-choice scraps) in a centrifuge and treating it with ammonia to remove any bacteria. It’s then made into blocks, often flash frozen, and ends up in grocery store meat aisles, fast food burger patties, and school lunches.

This ammonia-scrubbed meat was billed as super safe—its producers claimed it was less likely than regular cuts to carry bacteria like E. coli and salmonella. Yesterday, the New York Times ran an op-ed by Alexander Aciman supporting that claim and defending LFTB. Here’s the key bit:

What seemed to scare consumers the most about pink slime — which ABC claimed was used in 70 percent of ground beef sold in American supermarkets — was that the lean beef trimmings were treated with ammonia. That sounds scary, but is actually perfectly safe. Ammonia is used to kill harmful bacteria that exists in the meat, but is present in such tiny quantities that it is not harmful to consume. The United States Department of Agriculture affirmed as much in a letter back in 2012, a few weeks after the ABC story aired. Indeed, Chips Ahoy cookies and Velveeta cheese contain similar ammonium compounds, like ammonium phosphate, as does Wonder Bread.

Aciman also points out that LFTB  is “an affordable source of lean meat for low-income Americans, and stigmatizing it hurts people who rely on it for protein.” Those are fair points, and he’s not the only one defending LFTB. Tweets from the trial suggest that both BPI lawyers and “meat experts” are also finding fault with the “pink slime” label:

Still, it’s worth recalling a bit of nuance that my colleague Tom Philpott reported back in 2012:

The idea was that pink slime contained enough ammonia that, when you mixed it with ground beef, it would effectively sterilize the resulting blend. And the USDA and FDA had taken that promise at face value, Moss reports. One “top official” of the USDA’s division that oversees the meat supply assured Moss, “It eliminates E. coli to the same degree as if you cooked the product.”

Yet that premise was false. Rather than eliminating pathogens from burger mixes, pink slime was often actually adding pathogens, Moss revealed. Beef Products Inc.’s raw material, fatty trimmings that come mainly from the outside of the carcass, tend to be loaded with E. coli and salmonella. The company had been lowering its ammonia dose based on complaints about flavor. Possibly as a result, in tests conducted by the National School Lunch Program between 2005 and 2009, pink slime tested positive for salmonella at a rate four times higher than the conventional burger mix it was supposed to sterilize, Moss revealed.

The USDA had kept purchasing huge amounts of pink slime for schoolchildren despite the positive tests, Moss noted, precisely because it was cheaper than pure ground meat. “School lunch officials said they ultimately agreed to use the treated meat because it shaved about 3 cents off the cost of making a pound of ground beef,” Moss reported.

That last point is key: Mother Jones has reported extensively on the meat industry’s bid to increase its production even as its resources dwindle.

The trial is expected to last eight weeks. Beef Product, Inc. is suing for $1.9 billion in damages, but South Dakota law allows the amount to grow to as much as $5.7 billion. If awarded, the suit would be the largest food-related defamation case in US history. Bill Marler, a foodborne illness attorney who litigated lawsuits against burger producers nearly three decades ago, said he thinks it will be challenging for ABC News to win “not because they’ve done anything incorrect, but it’s going to be hard to get a jury in South Dakota to rule in favor of the media against a large meat manufacturer who employed a bunch of people.”

Listen to our interview with Bill Marler on foodborne illness and the history of food safety law  on our food politics podcast, Bite.