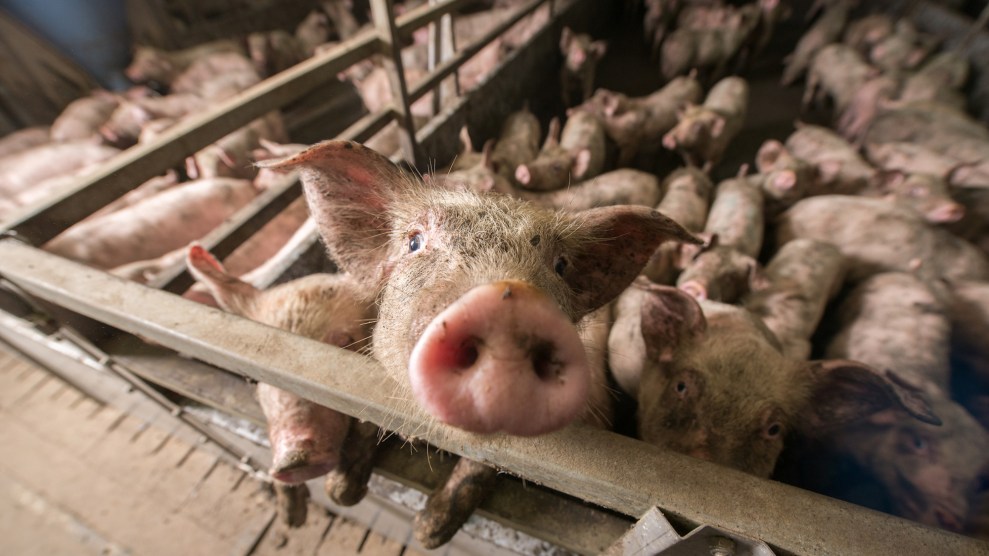 Pigs at a factory. Farming in Russiaagnormark/Getty images

Back in September, the World Health Organization—the United Nations’ public-health arm—released a stark warning: “The world is running out of antibiotics.” As a result, the group noted, once-minor complaints like urinary-tract infections are emerging as deadly threats.

The new guidelines call for the global meat industry to “stop using antibiotics routinely to promote growth and prevent disease in healthy animals.”

On Monday, the WHO came out with what it calls a crucial response to the growing crisis: It urged the globe’s meat producers to stop feeding antibiotics to healthy animals—a practice developed in the United States in the mid-1950s that has since taken root worldwide.

Why would anyone feed these crucial drugs to a healthy beast? As scientists have known since the dawn the antibiotic age in the 1940s, these crucial drugs are extremely fragile—the more they’re used, the more opportunity bacterial pathogens have to evolve resistance to them. But it wasn’t long before the meat industry learned that tiny regular antibiotic doses triggered faster growth in animals—a discovery that paved the way for the highly concentrated, factory-like operations that now dominate US meat production.

As I show in this 2016 piece and Maryn McKenna lays out in details in her superb new book, Big Chicken, it was clear by the 1960s that using antibiotics this way contributed significantly to the resistance problem.

Even so, it wasn’t until Jan. 1, 2017, that the US Food and Drug Administration finally rolled out voluntary rules asking that the meat industry stop using antibiotics as a growth promotor. But as I and others noted when the rules were first announced, the FDA’s request left open a gaping loophole: It allowed producers to continue feeding healthy animals small doses of antibiotics to “prevent” possible disease outbreaks. As the Pew Charitable Trusts showed, allowing preventative use basically gives the industry a green light to continue business as usual.

A March 2017 report from the Government Accountability Office chastised the FDA for leaving the loophole, complaining that the agency failed to crack down on “long-term and open-ended use of medically important antibiotics” in meat production.

The new WHO statement echoes that rebuke. It calls for the global meat industry to “stop using antibiotics routinely to promote growth and prevent disease in healthy animals.”

The FDA did not respond immediately to my call for comment about the WHO recommendation. With a deregulatory zealot in the White House and a man who is “entangled in an unprecedented web of close financial and business ties to the pharmaceutical industry” in charge of the FDA—to quote Public Citizen on the agency’s commissioner, Scott Gottlieb—it seems fanciful to expect the US government to heed the WHO’s call.

Meanwhile, major meat-producing nations like China, Brazil, and Russia are rapidly adopting the US style of meat production—including the reliance on routine antibiotic doses. And resistance to last-resort antibiotics like colistin and Carbapenems is spreading globally, including in the United States—a story I lay out here, here, here, and here. Microbes don’t respect borders—they whiz about the globe in people, in traded goods, and even in migratory birds. Like climate change, antibiotic resistance is a global phenomenon that will require global coordination of the kind called for by the WHO to solve. Without such action, antibiotic resistance will claim 10 million lives per year worldwide by 2050, up from 700,000 now, according to a 2015 UK report.