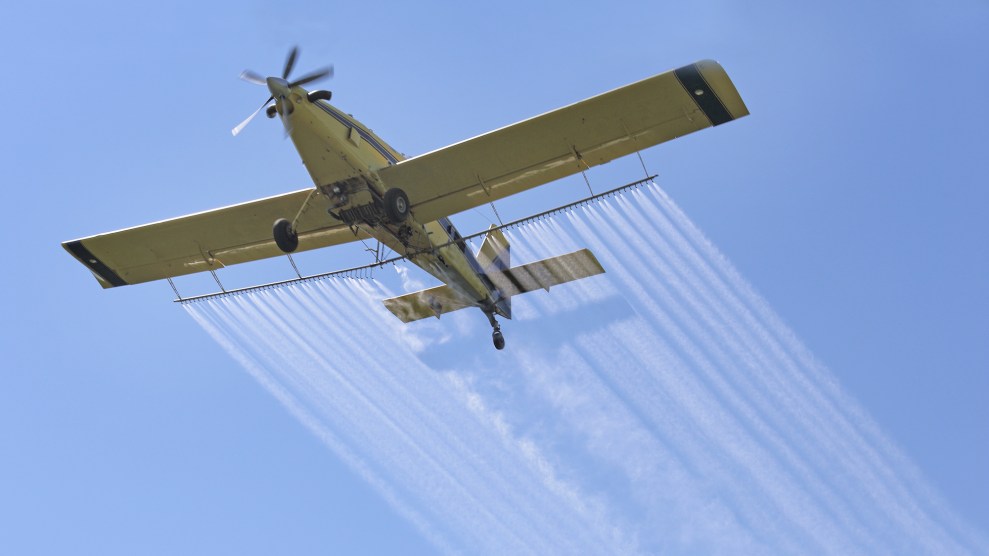 In August, a group 167 farm workers were harvesting garlic in California’s agriculture-heavy Kern County when some of them began to feel ill. The county’s agriculture department later found that 92 of the workers “exhibited symptoms of pesticide exposure.” This week, after concluding its investigation into the issue, Kern County slapped five companies with fines for incidents relating to pesticide drift.

Two separate chemicals were being sprayed in the area that day, though only one has been linked to the sickened workers: Vapam, a fumigant applied to soil to kill microscopic pests called nematodes. The potato grower and processor Tasteful Selections was hit with a $42,000 fine for failing to tell the 167 workers in the area that the fumigant Vapam had been injected in soil nearby, KQED reports.

“I heard someone say ‘it’s raining,’ I didn’t feel anything but I could smell it,” one worker  complained.

At around the time the workers were being exposed to Vapam,  another helicopter was spraying a pesticide containing chlorpyrifos nearby, the Kern County report found. Testing done on the clothing of the sickened farmworkers did not detect chlorpyrifos, though it was being aerially sprayed nearby with the same workers present. But the county imposed a $3,850 fine against the pesticide-application company that sprayed the chemical for failing to provide advance notice of the spraying and for applying it within a quarter mile of a residential area. Chlorpyrifos is a potent neurotoxin that’s been linked to developmental issues in children. The US Environmental Protection Agency moved to ban the chemical during the waning days of the Obama administration, but Donald Trump’s EPA quickly reversed that decision, under a cloud of controversy intensified by the $1 million contribution to Trump’s inauguration made by the pesticide’s maker, Dow.

Gustavo Aguirre, Kern County coordinator of the Central California Environmental Justice Network, noted that the incident marks the third confirmed case of confirmed chlorpyrifos drift in California since the Trump EPA reversed the ban. In one, which took place in May (I covered it here), the Kern County ag department was also ultimately moved to issue $50,000 in fines after 37 cabbage pickers were sickened by exposure to the chemical.

Paul Towers, organizing director for Pesticide Action Network, says the frequency of these incidents calls for stiffer penalties. “The fines levied against these companies amount to little more than pocket change for large-scale growers,” he said, “It’s simple—the punishment should fit the crime. Higher fines and larger no-spray zones around workers would be a much more effective deterrent to pesticide drift problems.”

The Kern County agriculture department’s report on the August incident, which collates testimony from several affected workers, paints a grim picture of what it’s like to produce food in a pesticide-intensive region.  “We started around four [4:00] to four thirty [4:30] in the morning,” one worker reported. “I heard someone say ‘it’s raining,’ I didn’t feel anything but I could smell it. I could smell a chemical smell like a garden product. I heard a plane or helicopter I never saw it but I heard it. I did have symptoms, my head was hurting, and my eyes were itchy and really watery.”

Another added: “My eyes were burning and they were watery, it lasted about three hours. I had a headache and was nauseated too that started about ten minutes after my eyes started burning. I felt that way for maybe a day and a half.”