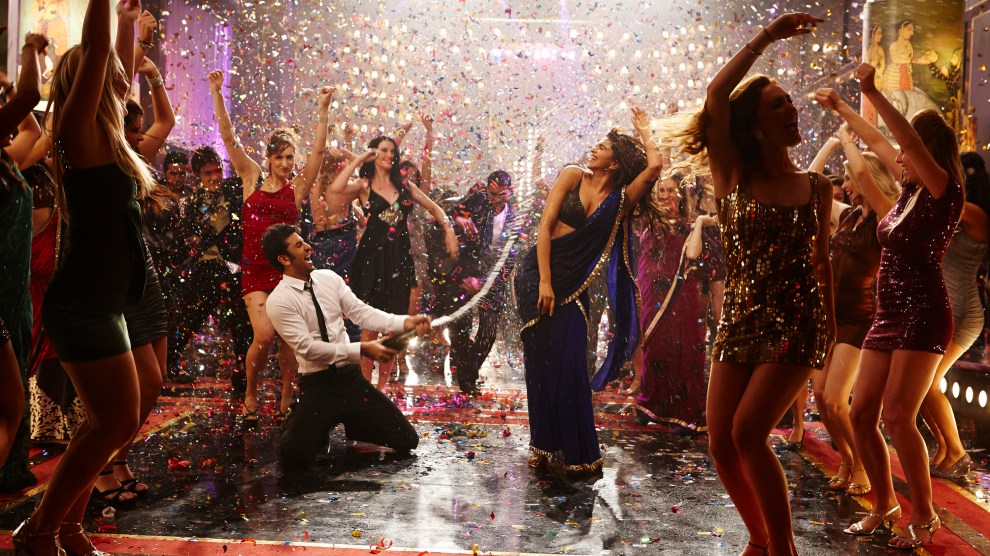 Sri Rao‘s parents moved from India to the United States in 1959, a time when there were fewer than 12,000 Indians in the country. (Now there are about 3 million.) Rao remembers growing up “a skinny brown kid” in an all-white suburban community, where he nevertheless developed a strong sense of his heritage through food and film.

“In my house growing up, there were two constants, the scent of Indian food simmering on the stove in my mother’s kitchen and the sound of Bollywood musicals emanating from the living room,” Rao says.

Rao eventually became one of the first American-born screenwriters to work on Bollywood films, and he’s learned a lot about bridging the two cultures along the way. He’s applied those insights in his new cookbook, The Bollywood Kitchen, which is full of easy-to-follow recipes for authentic Indian food—along with suggestions for the perfect Bollywood films to watch while enjoying it.

We caught up with Rao for the latest episode of Bite podcast. He told us about the inspiration for the cookbook, which Bollywood stars he’d invite over for a dinner party, and more. (The segment begins at about 3:50.)

Rao wants to make two things clear: Indian food isn’t as complicated as most people think, and Indian cuisine isn’t what most Americans order off the menu at a local Indian eatery. He made sure not to include tikka masala or tandoori chicken, dishes he calls “restaurant clichés,” but shares his recipes for keema (a savory, ginger filled curry dish), unda kati roll (a lightly-fried egg with coriander and cayenne pepper), and tiffin egg curry.

Here are two recipes from Rao’s book, which he recommends you eat while watching Dor, an art house film about two women in dire circumstances, set in the deserts of Rajasthan, India.

Rao writes, “There are countless variations from region to region and household to household, but the fundamentals of every homestyle chicken curry are the same—bone-in chicken swimming in a luscious tomato gravy.”

8 bone-in chicken thighs (about 3 pounds), skin removed (of course, you’re welcome to leave the skin on if you prefer)

2 Indian green chilies, cut in half (or an additional 1/2 teaspoon Indian red chilli powder or cayenne)

Heat 1 tablespoon of the oil in a very large braising pan or Dutch oven (ideally, the pan should be wide enough to fit all the chicken thighs in a single layer) over medium-high heat. Meanwhile, season the thighs with the turmeric and 1/2 teaspoon of the salt. Place the thighs in the pan, meaty side down, and sear for 7 to 10 minutes, then flip and sear for 3 minutes on the other side. Remove the chicken to a plate.

In the same pan, heat the remaining 1 tablespoon oil. Add the bay leaves, green chilis, and cinnamon stick. Allow them to begin infusing the oil, about 30 seconds.

Add the onion and cook, stirring, until deeply browned, 3 to 5 minutes.

Add the garlic and ginger pastes and cook, stirring, for 1 minute, reducing the heat if necessary to prevent burning. Then add the remaining 1 teaspoon salt, the red chili powder, and the cloves and allow the spices to bloom for another minute.

Stir in the crushed tomatoes. Cover and simmer until droplets of oil separate from the sauce, indicating that the tomatoes are well cooked, 7 to 10 minutes.

Meanwhile, pulse the peanuts in a spice mill to create a fine powder.

Place the chicken pieces back in the pan, nestling them into the sauce. Cover and simmer for 20 minutes, occasionally rearranging the thighs, flipping them, and spooning over the sauce.

Add the cilantro and coriander. If you’re making the dish a day ahead (which I highly recommend), stop at this point. Cool completely and refrigerate.

Cover the pan and simmer until the sauce has turned from red to deep orange-brown, 10 to 15 minutes. Adjust the seasonings to taste. If it’s too spicy, simply add another spoonful of yogurt. Remove the green chilies, bay leaves, and cinnamon stick. Take the pan directly to the table and serve family style over basmati rice.

Mango Cheesecake, from The Bollywood Kitchen

Rao writes, “The crust of this mango cheesecake is an homage to the ever-adored Indian ‘biscuit,’ which is what I use in place of graham crackers.”

1/2 cup crushed, unsalted cashews (crush in a food processor or place in a plastic bag and beat with a rolling pin)

FOR THE FILLING: If using frozen mangoes, thaw them in the microwave. Also set out the cream cheese to soften.

Preheat the oven to 350°F. Grease a 9-inch springform pan with butter or cooking spray. Wrap the bottom and sides of the pan with aluminum foil (to prevent the contents from seeping out in the oven).

FOR THE CRUST: In a food processor or mixing bowl, combine the crushed tea biscuits, cashews, and sugar with the melted butter to form crumbs the consistency of wet sand. Press the crumbs evenly onto the bottom of the springform pan. Bake for 8 to 10 minutes, just until slightly golden. Set aside to cool.

Meanwhile, create a mango puree by blending the mango pieces (make sure they are fully thawed) in a blender until completely smooth. Measure 2 cups puree and set aside.

Using a stand mixer or hand mixer, gently beat the eggs with the sugar. Add the cream cheese and sour cream and beat until smooth. Then add the 2 cups mango puree, cardamom, and cornstarch and beat until well combined and creamy. It’s okay if there are some specks of cream cheese visible in the filling.

Once the crust is cool to the touch, pour the filling into the pan. Bake for 1 hour and 30 minutes to 1 hour and 45 minutes, until the edges are set and lightly brown.

Turn off the oven and crack the door so the cheesecake can begin cooling slowly.

After an hour or so, remove the cake from the oven and cool completely. Then refrigerate overnight until it is set.

Top the cheesecake with coconut flakes (this is also a good way to cover any cracks that may have formed). Slide a knife around the perimeter of the cheesecake and remove it from the springform pan. Serve while still chilled.