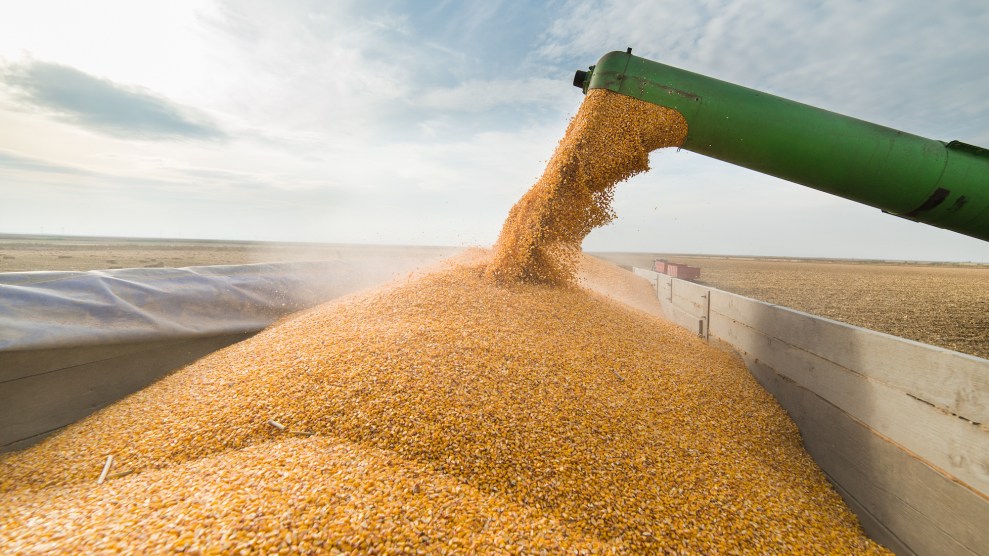 Farmers—especially the ones who grow the corn and soybeans that churn through our food system and fuel our country’s penchant for hamburgers and bacon—are in a tight spot. For seeds, pesticides, and fertilizers, these growers depend on a tiny number of companies that have enormous leverage to raise prices. And when they’re ready to market their crops, they’re confronted by another handful of powerful grain-trading firms, who in turn have leverage to keep prices down.

These companies are merging into bigger and more powerful entities. The Department of Justice is currently mulling a proposed merger between seed/pesticide giants Monsanto and Bayer, which would further shrink farmers’ options for buying inputs. And now a new tie-up between agribusiness titans looms. The grain-trading behemoth Archer Daniels Midland is pushing to take over rival Bunge, the Wall Street Journal recently reported, citing unnamed sources.

Neither company has commented on the story, but investors appear to be taking it quite seriously. ADM’s share price has jumped about 10 percent since the Journal report, while Bunge shares are up 15 percent.

“If we thought Bayer-Monsanto was the mega-merger from hell, we’re now facing the real one,” said Joe Maxwell, executive director of the Organization for Competitive Markets.

If ADM and Bunge do hook up, the marriage will represent the latest episode in an extraordinary spasm of consolidation in agribusiness markets that began in 2015, when Dow and DuPont announced their intention to merge, ultimately creating a combined seed/pesticide unit that’s roughly the size of its biggest current rival, Monsanto, in annual sales. Since then, Swiss pesticide/seed player Syngenta has been bought by the Chinese chemical colossus ChemChina, fertilizer giants Agrium and Potash Corp of Saskatchewan have merged into a new mega-player called Nutrien, and, of course, Bayer bought Monsanto—a deal that still awaits regulatory approval in Europe and the United States.

Those deals all involve input suppliers, or companies that sell farmers the stuff they need to grow crops: seeds, pesticides, and fertilizers. By shrinking the number of players in these markets, the mergers reduce the competition for farmers’ business, handing price leverage to the remaining players. For instance, if Bayer-Monsanto goes through, the same three companies will control around 60 percent of the globe’s seed and pesticide markets. A 2016 study by Texas A&M researchers found that a successful Monsanto-Bayer merger would increase seed prices for US farmers by around 2 percent for corn and soybean seeds and by 20 percent for cotton seeds. (They also noted that in the 1960s, around 70 basic pesticide manufacturers operated in the United States, “but mergers and acquisitions have combined those firms into roughly eight major multinational manufacturers.”)

What makes the possible ADM-Bunge deal different is that it involves the buy side—companies that buy farmers’ crops and process them into livestock feed, food ingredients, and biofuel, as well to serve as the middleman in grain export markets. The grain-trading market, as it’s known, has for decades been tightly controlled by a handful of companies known as the ABCDs, for ADM, Bunge, US megalith Cargill (the largest privately held company in the United States), and Netherlands-based Louis Dreyfus Company.

US corn farmers—the world’s leading producers of this livestock feed—have essentially three buyers: ADM, Cargill, and Ingredion (formerly Corn Products International). They control 87 percent of the market, according to a 2014 study by University of Missouri rural sociologist Mary Hendrickson. For the US soybean crop—also the world’s biggest—ADM and Bunge are the top two buyers, Hendrickson found. Together with Cargill and Nebraska-based Ag Processing, they process 85 percent of US-grown soybeans.

Farm advocates say removing a major player from such a tight market means more pressure on crop prices for farmers—who are already enduring the fifth straight year of low corn and soybean prices. Grain markets are global—US corn and soybean farmers compete with their counterparts across the world, most prominently in Brazil, where soybean production has jumped to near US levels in recent years and corn output has surged. Whereas ADM is the top player in US grain markets, Bunge is king in Brazil, especially in soybean processing. According to Reuters, Bunge processes 27 percent of the Brazilian soy crop, while ADM owns a relatively small 10 percent. A two-headed beast that looms over the globe’s two most important grain-producing regions would have yet more power to force US and Brazilian growers to compete with each other, driving down prices even more.

In a note to clients, Seth Goldstein, who covers agribusiness for the investment information firm Morningstar, wrote that US and Brazilian antitrust authorities would likely force the combined firm to sell off overlapping assets in the respective countries. Even so, he wrote, a “combined ADM-Bunge would likely be the dominant grain merchandiser and processor of both continents,” meaning North and South America.

Phil Howard, a professor at Michigan State University who studies corporate consolidation in the food system, compares the situation to yet another highly consolidated ag sector: meat. There, massive companies like Smithfield both raise hogs and process them into pork, using their own hogs—known as their “captive supply”—to supplement what they buy from outside farmers.  When hog prices rise above what Smithfield want to pay, the company can merely slaughter its own hogs, which brings down the price that independent farmers can command.

In an email, Howard called a potential ADM-Bunge hybrid with huge positions in both the United States and Brazil the “equivalent of meat processors’ captive supplies, but for grain globally.”

“If we thought Bayer-Monsanto was the mega-merger from hell, we’re now facing the real one,” Joe Maxwell, executive director of the Organization for Competitive Markets, a Lincoln, Nebraska-based think-tank focusing on antitrust issues agriculture markets. “With the concentration on the input and now the buy side, the [US] farmer’s just going to get squeezed out of the market,” he said.