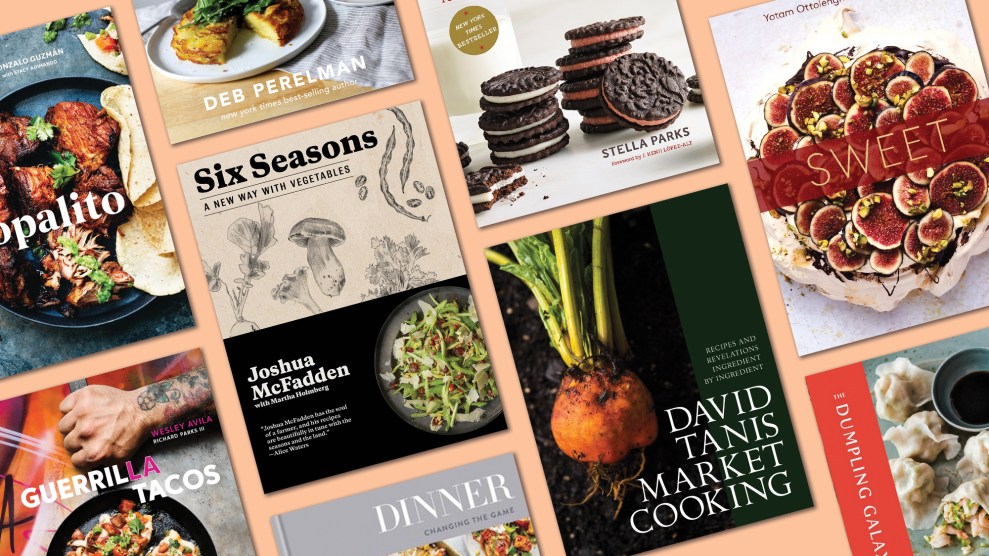 When the going gets stressful, the stressed get cooking. That’s my motto. The Trumped-up year that’s finally ending provided me with plenty of desire to get busy in the kitchen, but not nearly enough time. For all of its faults, though, 2017 delivered an excellent crop of cookbooks. Here are the ones I’ll be leaning on as I try to make good on my New Year’s resolution to cook more often in 2018.

First, a note. I get that not everyone finds solace in the kitchen. In a funny New Yorker piece, my former colleague Tasneem Raja gets at one reason why: The idea that if you’re not putting splendid home-cooked meals on the table daily, you’re somehow Doing It Wrong, a bad parent or romantic partner, a failure.

As the great mid-20th century British cookery writer Elizabeth David put it: “Good food is always a trouble.” It takes time, effort, a life’s accumulation of skill, resilience when a recipe doesn’t turn out right, and the patience to battle a pile of dirty dishes. In a world overflowing with demands, responsibilities, and opportunities to avoid the kitchen, cooking isn’t and needn’t be everyone’s preferred daily practice.

But there’s pleasure in it, too. It’s my hope that these books will lure you into the kitchen, not to avoid guilt or gain status, but with the promise of a thrill: that of transforming raw parts into something delicious to eat.

With no further ado, and in no particular order:

“I go to the market, see what looks best, and then decide what will go on the menu,” explains Tanis, a New York Times food columnist and former chef at Berkeley, California’s farm-to-table temple Chez Panisse. Market Cooking is really several books in one: a guide to alliums, which instantly added persillade (a mix of minced parsley and garlic) to my bag of tricks; a primer on seasoning, with informed discussions of salt, spices, and chile peppers; and an idiosyncratic manual to the basics, from boiled eggs and biscuits to killer pantry pastas.

At the book’s center lies a kind of unfussy hymnal to the god of seasonal cooking, moving from spring lettuce to winter squash. Most cookbooks send you to the supermarket with a shopping list; this one beckons you home from the farmers market to see what tasty thing Tanis would do with, say, turnips. Turns out, not much. He has you steam young turnips with a little olive and their own greens; mature ones are to be sliced and browned in butter. Both burst with peppery flavor.

Not every recipe in Market Cooking is that minimalist, but the basic concept centers on straight-ahead preparations highlighting a single ingredient, goosed with common pantry ingredients. And unlike most American farm-to-table tomes, which don’t venture much beyond the Mediterranean for inspiration, Tanis includes such delights as kimchi soup with pork belly (dead simple, once you have the kimchi) and Oaxaca-style garlic soup (you’re always six ingredients and about 20 minutes away from nirvana). Earlier this year, Maddie Oatman interviewed Tanis for Bite podcast—go here to listen, as well to find  recipes featuring leeks, parsnips, turnips, and fennel.

Six Seasons: A New Way with Vegetables, by Joshua McFadden with Martha Holmberg

I thought this one would be too on-the-nose to convince me. Joshua McFadden is the ultimate hipster chef, with a resume dotted with stops at hot New York restaurants like Momofuku, Franny’s. Lupa, and Blue Hill. He currently runs his own spot in—sure, why not—Portland, Ore.

And … six seasons? Who elected this dude God and told him to invent two more? Turns out, this book is a lot like Tanis’—a spring-to-winter traipse through the vegetable patch, one ingredient at a time. I simmered down when I discovered the source of McFadden’s two extra seasons: he merely cleaved summer into three parts—early, mid, and late—which, fair enough. And damn it, his recipes are just good—generally more boldly flavored and intricate than Tanis’, but not excessively so.

McFadden demands a deeper pantry than Tanis does. He pairs cauliflower with salt cod, and roasted onions with ‘nduja, the spreadable salami of southern Italy. But his culinary range is narrow, never straying from southern European traditions. Note the quotation marks around his (admittedly delicious) “Chinese” beef and broccoli recipe, which gets it umami not from soy sauce but rather from a pungent anchovy vinaigrette. “There’s nothing Chinese about this dish,” he notes, “rather than it reminds me of the takeout treat of my youth.” All that said, Six Seasons makes a fine pair with Market Cooking for any farmers market shopper. Turn to Tanis for simple family meals and to McFadden for celebrations.

Nopalito: A Mexican Kitchen, by Gonzalo Guzman with Stacy Adimando

Nopalito is my favorite restaurant in San Francisco. It offers a shot of Mexico City in El Norte, complete with high-grade Vitamina T (tacos, tortas, and tamales), plus delicacies like tinga (shredded chicken in a tangy chipotle sauce), enfrijoladas (corn tortillas swathed in a black-bean sauce), and mezcal. Nopalito the cookbook makes this glorious cuisine accessible to the US kitchen. I used it for Thanksgiving dinner, forgoing turkey altogether for birria al res: beef short ribs slow-braised in a puree of ancho chiles, garlic, beer, and spices (cloves, ginger, cumin, thyme). What pushed the dish into sublime territory were the suggested garnishes—in addition to a fiery tomato salsa, Guzman called for sliced red onions quick-pickled in red wine vinegar and herbs. Escabeche rojo, as the books calls this addictive condiment, has quickly emerged as a staple of my kitchen, as has the similarly prepared curtidos para tacos—spicy pickled carrots, cauliflowers, and onions.

Then there’s the salsa section, which on its own is worth the price of the book: no fewer than 17 distinct salsitas, representing the dizzying variety of these fiery condiments found in Mexico’s homes, restaurants, and street-food stalls. I plan to make them all over the course of 2018.

Guerrilla Tacos: Recipes from the Streets of L.A., by Wesley Avila

About three years ago, I happened upon a jolly bearded man dishing up spectacularly flavorful, inventive, and vegetable-forward tacos from an inauspicious food truck in Los Angeles’ arts district: stuff like brown-buttered sweet potatoes, spiked with an almond-habenero salsa and invigorated with corn nuts and feta. Wesley Avila, the maestro behind this tortilla-encased symphony of flavors and textures, has since conquered the foodie press, announced plans for a stationary restaurant, and produced this intoxicating volume revealing his secrets. The preparations can be elaborate—most of the dozens of tacos come with their own custom salsa—but the effort pays off.

Dinner: Changing the Game, by Melissa Clark
A long-time New York Times recipe wizard, Melissa Clark has a theory. What puts many people off cooking dinner, she suggests, is the meat-and-three dogma: the old idea that a square meal consists of a protein plus a couple of separate veggies sides. It’s more efficient and tastier, Clark argues, to throw it all together in “one fantastic dish that shines bright on the table.”

She doesn’t mention meal kit companies like Hello Fresh and Blue Apron, which have also seized upon such all-in-one meals. But Clark is essentially empowering home cooks to do so on their own, without all the regimentation and wasteful packaging. Like the meal-kit titans, she leans on an array of pre-made condiments to add zip and novelty—she urges you to stock the pantry with preserved lemons, fish sauce, kimchi, red curry paste, and za’atar. And she’s right that many of the dishes, like her fantastic pasta with asparagus, peas, and Italian hard cheese, will only take you “two minutes longer than it took the pasta to cook,” once you gain practice and confidence. The book brims with equally winning recipes, centered on everything from pork to seitan.

Also excellent:
Chefy tacos and farmers market minimalism are great, but sometimes, the heart wants a dutch baby or chicken-noodle soup. Like millions of other cooks, I turn to Deb Perlman’s excellent Smitten Kitchen blog for guidance in such matters. Her latest cookbook delivers on its title: Smitten Kitchen Everyday: Triumphant and Unfussy New Favorites. It’s not only dedicated to the homespun classics: Dishes like cucumber/yogurt gazpacho with mint, almonds, and grapes hit the spot, too. Her carrot ginger salad dressing is already a house staple.

Then there are those times when you want to flee to another realm altogether, one characterized by flavor-bomb silken pouches designed to be dipped in umami-laced sauces. I’ve never made the pilgrimage to Dumplings Galaxy, Helen You’s celebrated restaurant in Flushing, Queens. But Dumplings Galaxy, the cookbook, delivers her secrets to the home cook.

Dessert isn’t for every day, but purging it completely would be an extreme form of moderation. Much better to do it occasionally and right than not at all. Two highly pedigreed sweets books emerged in 2017. Sweet: Desserts from London’s Ottolenghi, by Yotam Ottolenghi and pastry chef Helen Goh brings the same level of care and imagination Ottolenghi bestowed on savory items in his beloved books Plenty, Plenty More, and Jerusalem. Go there for the single richest chocolate dish I’ve ever had (a deceptively simple tart); stay for the peanut sandies and other cookies. The other, BraveTart: Iconic American Desserts, is an astonishing piece of work by Stella Parks, pastry doyenne of Serious Eats, the food-science-meets-gourmet website. Don’t pick it up looking for a primer on tarts, despite the title. Rather, it’s a deep dive into sweet, sweet Americana—from Boston cream pie to that southeastern beach staple, key lime pie, to the best carrot cake I’ve tried. Ever wondered how to make your own Heath-like chocolate toffee or even a Reese’s Peanut Butter Cup? Parks has you covered.