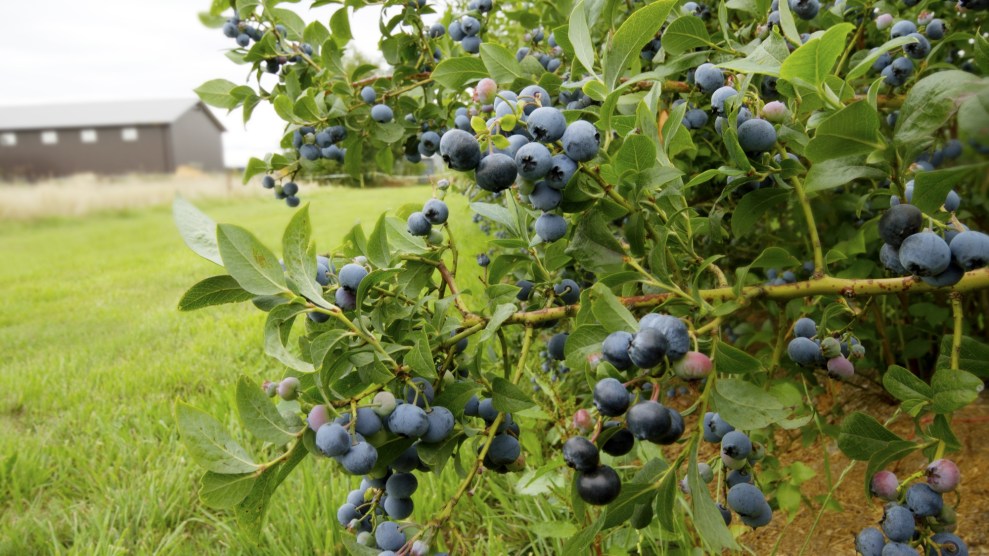 Early last August, a blueberry picker at a farm in Washington named Honesto Silva Ibarra was rushed to the hospital in an ambulance. According to a recent lawsuit, the heat and haze from nearby forest fires had caused the pickers at Sarbanand Farms to become dizzy and get headaches throughout the summer. But the workers were hesitant to report their symptoms: A supervisor at Sarbanand had previously told them they were required to work every day “unless they were on their death bed.”

But Ibarra’s hospitalization deeply concerned a number of the farm’s workers, and two days later, roughly 70 of them held a strike to call for better conditions. When they returned for work the next day, according to the suit, their managers fired them and threatened to call police and immigration authorities if they did not leave the premises within an hour.

Like many of his fellow workers at Sarbanand Farms, Ibarra was a native of Mexico, here in the US on an H-2A visa, which allows employers to bring in foreign agricultural workers on a short-term basis. Under the provisions of the H-2A program, workers’ ability to remain in the US is tied to their employment: Their visas are sponsored by their employers, and they aren’t allowed to look for work elsewhere. With nowhere to go, many of the workers who were fired after the strike were left stranded for nearly two weeks in a makeshift camp near the farm.

Now, two of these workers are part of a federal lawsuit that alleges the supervisors at the farm and its parent company routinely threatened and intimidated its H-2A employees into working under grueling conditions. The suit is seeking class action status to represent more than 600 H-2A workers who picked blueberries at Sarbanand.

The lawsuit, filed last week in a federal court in the Western District of Washington, alleges that Sarbanand Farms, its owner, Munger Bros. LLC, violated federal anti-trafficking laws and Washington state law through “a pattern of threats and intimidation” that caused its H-2A workers to believe they would suffer serious harm unless they complied with the farm’s demands. The companies have denied any wrongdoing. Munger is one of the largest producers of fresh blueberries in the world, according to the suit, and owns and operates more than 3,000 acres of blueberry farms in California, Washington, Oregon, British Columbia, and Mexico. It has used H-2A workers since at least 2006 for its blueberry harvest.

“You came here to suffer, not for vacation,” a Munger manager allegedly told its guest workers.

In addition to intimidation and threatening to send workers home, the lawsuit also alleges that Sarbanand failed to provide workers with sufficient meals, despite deducting $12 a day from their daily wages. Workers often had to buy extra food at their own costs, but were prohibited from eating while they were in the field. In at least one incident, a top manager from Munger pressured workers to pick two boxes of blueberries an hour or risk being fired and sent home. Another manager from Munger allegedly told the workers: “You came here to suffer, not for vacation.”

“A sophisticated employer took advantage of vulnerable and impoverished foreign H-2A workers,” said Joe Morrison, an attorney at Columbia Legal Services, a nonprofit legal aid organization that filed the suit along with the firm Schroeter Goldmark & Bender. “This isn’t somebody who just got into the program and was unprepared,” Morrison told Mother Jones. “This is a big-time operator that has the tools and money to be able to know and understand how to comply with the law.”

Munger and Sarbanand Farms said a statement they “will vigorously fight the allegations in the complaint, which will be shown to be untrue and without merit….All the Munger companies take seriously their responsibilities with respect to worker safety and they are committed to the wellbeing of every one of their workers.” The statement also stressed the companies’ goal of complying “with all laws and regulations governing the workplace.”

Gerald Baron, executive director of Save Family Farming, a Washington farm advocacy group, argues that the lawsuit is part of a campaign to eliminate the H-2A program “by publicly accusing farmers of horrible treatment of workers.” Baron says the program is valuable to both farmers and workers, and allows workers to earn much higher incomes than they would in Mexico. (Baron also does communication work for Whatcom Family Farmers, an advocacy group representing the interests of family farmers in Whatcom county, including Sarbanand.) “We think it extremely unjust of these activists to work to eliminate these high value jobs from Mexican families for whom they provide very important income,” Baron wrote in an email to Mother Jones.

The lawsuit also alleges that CSI Visa Processing, which helped Munger and Sarbanand recruit the H-2A visas, lacked the proper certification to obtain H-2A visas in Washington, and failed to provide H-2A workers with basic information about their working conditions and that they would have to pay for meals beyond the $12 deduction. CSI Visa Processing did not respond to a request for comment.

The lawsuit brings fresh attention to the H-2A visa program, which has become one of the fastest-growing visa programs in recent years: The number of H-2A visas more than doubled between 2011 and 2016. But it is also controversial. While some companies say that the H-2A visa provides much-needed workers amidst a farmer labor shortage, the program has also had a long and documented history of abuse. A 2013 report from the Southern Poverty Law Center called the H-2 program, which also includes a temporary visa for non-agricultural work, “close to slavery,” noting that the few protections afforded to H-2 workers are loosely enforced.

Honesto Ibarra, the farmworker taken to the hospital in August, later died of natural causes related to complications with diabetes, Seattle radio station KUOW reported. The Washington State Department of Labor and Industries has opened two investigations into Sarbanand Farms, one on health and safety standards—including whether workplace factors contributed to Ibarra’s death—and another on employment standards, including rest breaks, meal periods, and wages, according to Elaine Fischer, a spokeswoman for the agency. Separately, the US Department of Labor’s Wage and Hour Division is also investigating Sarbanand Farms.

Update, February 1, 2017: The Washington State Department of Labor and Industries announced today that as a result of the agency’s investigations, Sarbanand Farms now faces nearly $150,000 in state and local fines in connection with violations related to late or missed employee breaks and meal periods—one of the largest fines ever assessed for these violations. Sarbanand Farms has been briefed on the agency’s findings, and told the agency that it has corrected the violations. A separate investigation into workplace safety in connection with Ibarra’s death found no health and safety violations.