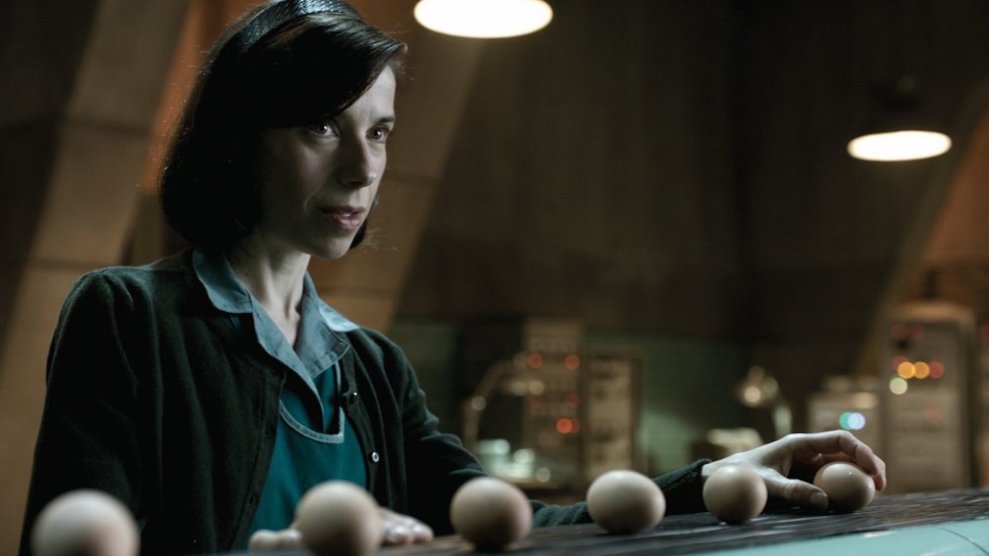 Elisa, played by Sally Hawkins, woos her fish-man friend with eggs in The Shape of Water. Photo courtesy of Fox Searchlight Pictures.

In the film Phantom Thread—up for six Oscars, including Best Picture—director Paul Thomas Anderson tells the twisted mid-century love story of a laser-focused London fashion designer (Daniel Day-Lewis) and his would-be muse (Vicky Krieps). But for all the attention on the artful cutting of fine fabrics and the bodies sheathed in them, “Phantom Thread isn’t a movie about fashion any more than American Psycho is a movie about banking,” Helen Rosner writes in The New Yorker.

Rather, she argues, it’s “one of the great food movies in recent memory.” Rosner’s essay persuaded me to see Phantom Thread and several of 2017’s bumper crop of excellent films with new eyes: as meditations on the complex and not always appetizing role food plays in life. In the latest episode of Bite podcast, I got Rosner to riff beautifully on the topic.

We tend to think of food movies as ones that “make food look delicious, that use it as tool of a positive expression, typically of love,” she said. But our relationship to meals is much knottier than that. The way we control what we eat, resist or give in to our cravings “parallels the way that we develop relationships to sex and sexuality.”

You will never hear the sound of a knife spreading butter across toast the same way again.

And while the table can be a site of love and nurturing, “there is something inherently sinister to the act of  feeding someone,” Rosner said.  In Phantom Thread, the breakfast nook emerges as a theater of seething, tea-fueled emotional combat. You will never hear the sound of a knife spreading butter across toast the same way again.

The toast is buttered on both sides in The Shape of Water, a film that features a unique morning egg regimen and recurring green jello. Food works two ways in this one, Rosner said. It fuels the love stories at the movie’s center: Sally Hawkins’s mute night-cleaner uses boiled eggs to woo the tortured fish-man played by Doug Jones, and nurture her equally tortured neighbor, played by Richard Jenkins. Then there’s that utterly malign green jello, which emerges as the “harbinger of evil in the world.” Here’s a taste:

In Call Me By Your Name, eros blooms in a sumptuous northern Italian villa amid soft-boiled eggs and one particularly ripe peach. Despite these flourishes, “food doesn’t tell the story in Call Me By Your Name in the way it does Phantom Thread and The Shape of Water,” Rosner noted. “Of the the three movie, Call Me By Your Name is the most centrally sexual—it’s about sex,” she said. “Maybe for that reason, the movie doesn’t need food to fill in for it.”

Rosner and I didn’t discuss Get Out—with its remarkably awkward cocktail scenes and anti-heroine who segregates colored cereal from white milk—because she has an aversion to horror films and didn’t see it. Here’s what I think is the creepiest moment in the film:

At the end of our conversation, I wondered aloud whether all movies aren’t food movies. “Pretty much,” she replied. “Food is such a useful way to tell us things about characters and their relationships, the nature of their domestic lives and their public lives,” she said. “It’s an extraordinarily expressive tool for a filmmaker.”