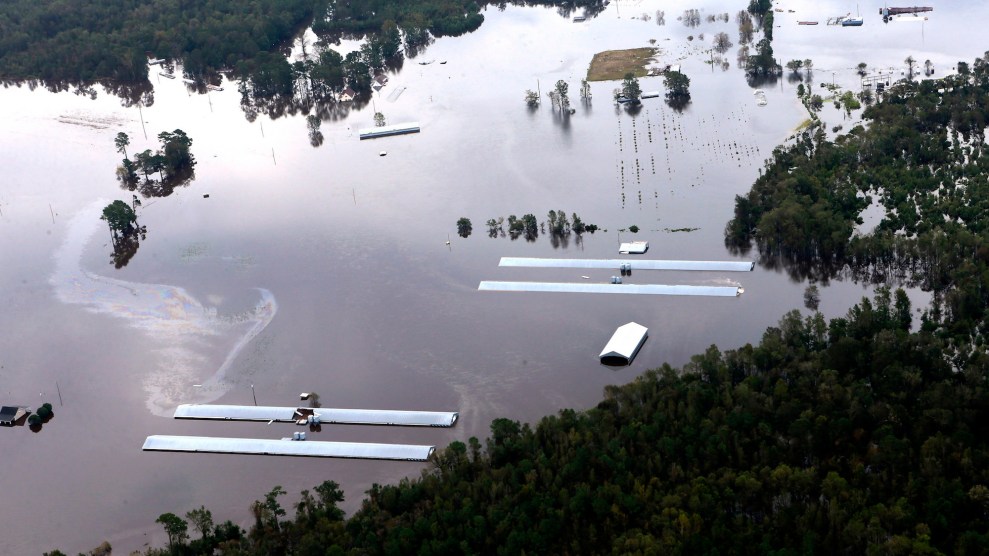 This is your chicken during a flood. Rick Dove/Waterkeeper Alliance

Update (9/19/2018): North Carolina’s Department of Environmental Quality reports that, as  of noon on Sept. 19, 2018, five hog-manure lagoons had incurred structural damage from flooding, 21 are leaking into floodwaters, 17 are completely inundated by floodwater, and 36 are filled to capacity and likely to start leaking soon.

North Carolina’s rivers basins, now swollen with rainwater from Hurricane Florence, are home to thousands of large indoor hog and poultry farms, as well as cesspools of liquid hog waste. Predictably—just as happened two years ago in the wake of Hurricane Matthew—floods and factory-scale livestock farming are proving to be a toxic and deadly (for the animals) mix.

A group called the Waterkeeper Alliance sends pilots into the air after North Carolina flood events to document the damage done to these operations. The group uploads aerial photo to a Flickr feed, which will be updated regularly over the next several days. The first flights went up Monday, after Florence’s rainstorms had petered out, and the imagery is stark. Below are some just-posted images the group took during Monday’s flights.

In this one, the four long, narrow structures are indoor poultry barns, almost completely submerged.

This one shows a similar scene, in West of Trenton, NC: four poultry barns, mostly under water.

In the one below, a massive hog operation with multiple barns and a manure lagoon—that rectangular pink thing, top right—has barely escaped inundation. But note that river flows from the storm have not peaked, and more severe flooding could yet happen.

In this one, a hog operation in West of Trenton, NC, the barns are mostly underwater and the manure lagoon has been topped by flood waters.

Then there’s the startling photo below, sent to me by Matthew Starr, the Upper Neuse Riverkeeper for Sound Rivers, taken from the air yesterday. It depicts liquid manure from a hog lagoon being pumped directly into floodwater.

Since the rivers are still cresting, it’s too early to tell how much much toxic manure will flow into North Carolina’s waterways in Florence’s wake, or how many animals will perish. Early indications are chilling. Sanderson Farms, the nation’s third-largest chicken producer, issued a statement Monday revealing that 60 of the 880 chicken barns that grow birds under contract for the company had flooded, killing an estimated 1.7 million birds of the around 20 million the company currently holds in the state. The statement added:

In addition, approximately thirty farms, housing approximately 211,000 chickens per farm, in the Lumberton, North Carolina, area are isolated by flood waters and the Company is unable to reach those farms with feed trucks. Losses of live inventory could escalate if the Company does not regain access to those farms.

That means around 6 million additional chickens are currently cut off from feed deliveries and could soon perish.

In the next episode of Bite podcast, which will air Friday, I catch up with Watereeper Alliance about what they’re seeing as they document the destruction. I also talk to retired eastern North Carolina chicken farmer Craig Watts—who until January 2016 grew birds under contract with another giant chicken company, Perdue—about the stress and financial risks incurred by contract farmers during these increasingly frequent catastrophes.

Just two years ago, months after Watts retired, Hurricane Matthew wrought similar destruction upon North Carolina’s CAFO-intensive, river-crossed coastal plain. According to Sound Rivers’ Starr, “in the two years since, no action was taken by the [meat] industry” to shut down operations in flood-prone areas.