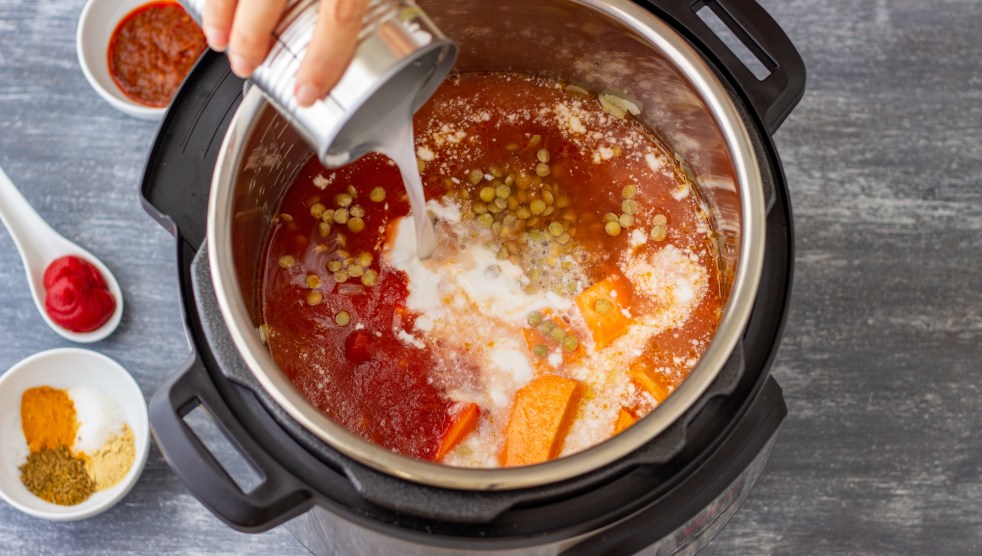 The Instant Pot has emerged in recent years as a multi-use sensation: a plug-in countertop appliance that does everything from slowly incubating yogurt to quickly turning unsoaked beans tender to scrubbing the kitchen floor. (Okay, not the latter.)

After getting one a year ago and using it regularly ever since—inspired by reporting from my colleague Kiera Butler on how Indian immigrants had embraced and popularized it—I decided it was mainly good for three very useful things: beans, stock, and tough cuts of meat like beef short ribs. (The one novelty use I developed was pressure-steaming.)

What was I missing? Turns out, a lot. That’s what I learned from the cookbook that most rocked my kitchen this year, Melissa Clark’s Comfort in an Instant: 75 Comfort Food Recipes for Your Pressure Cooker, Multicooker + Instant Pot (Clarkson Potter). It made me cast a stunned side eye at the contraption: You can do that?

It made me cast a stunned side eye at the contraption: You can do that?

By “that,” I mean: a first-rate spaghetti and meatballs and an absurdly delicious pasta sauced with chickpeas and mint. In short, Clark has given me a new paradigm for pasta cookery.

For many years, I followed the dogma laid down by Marcella Hazan in her magisterial Essentials of Classic Italian Cooking. “Pasta needs lots of water to move around in, or it becomes gummy,” Hazan warned. “Four quarts of water are required for a pound of pasta. Never use less than three quarts, even for a small amount of pasta.” She also asserted that said must water be brought to a rolling boil before contact with noodles.

In 2009, I converted to the low-water method championed by the food-science writer Harold McGee, which calls for just 1.5 quarts of water per pound of pasta and recommends that the noodles be added while the water is cold. The result is just as good as Hazan’s way—and much faster. McGee identified another benefit, too. The starchy water left over from making pasta is a valuable culinary resource; Italian cooks have long utilized it to add body and depth to sauces. In McGee’s less-is-more method, the leftover water is more concentrated, and thus richer, than in the Hazan technique.

In Comfort in an Instant, Clark has won me over to an even more concentrated regime: throwing pasta in a pressure cooker for five minutes with some flavorful ingredients and a little water, from which it emerges draped in a silky, gorgeous sauce, ending in the washing of just one pot.

The basic idea goes like this. Using the sauté function, you simmer garlic and crushed chile flakes in olive oil. When it’s fragrant, dump in a can of crushed tomatoes and stir, letting the sauce reduce for a few minutes; then break spaghetti in half and add it to the pot along with some water. You could proceed to pressure cooking here; but Clark takes it a step further. She has you drop hand-formed, raw meatballs (ground beef, egg, panko, parmesan, basil) right on top of the pasta, before giving the pot five minutes of high pressure. I was aghast at the idea of not pre-browning the meatballs—and sure enough, after lifting the lid, I found a bunch of unsightly gray orbs on top of a pretty great-looking pasta in red sauce.

But then Clark has you gently fold the meatballs into the sauce and replace the lid, letting it all sit, cooking in the residual heat, for another five minutes. In that time, the meatballs have taken on the rich maroon color of the sauce, giving the illusion of having been pre-browned without the fuss. The dish is a triumph—and the palate for a million variations, meatless and not. I’ll never make pasta another way as long as my Instant Pot lasts.

The book also includes fuss-free versions of that notoriously fussy dish, risotto, and some ambitious meat projects, like a stab at speeding up David Chang’s legendary Bo Ssam (slow-cooked whole pork shoulder) that I have yet to try. She also offers recipes that were too radical for me to attempt. In my (obviously stunted) imagination, pressure cooking would utterly mangle both cheesecake and frittatas (open-faces Italian-style omelets), but given the success of Clark’s recipes in my kitchen so far, I trust her.

It should be noted that the book mainly utilizes just two of the Instant Pot’s many functions: sauté and pressure-cook. You can actually perform them in any heavy-bottomed stovetop pressure cooker (though doing so would require considerably more attention than tapping a keypad). Home cooks in places like Mexico and India have been taking pressure cookers in creative directions for decades. For the rest of us, Comfort in an Instant is a great guide to expanding the limits of this powerful tool.

Here are some other favorites from 2018:

• Essential Indian Instant Pot, by Archana Mundhe. As noted above, Indian home cooks helped popularize the Instant Pot here in the United States. In this book Archana Mundhe shows why. She delivers loads of ideas for spicy, quick braised lamb and chicken, and her section on lentils and beans will have you heading to the specialty store for products like sabut masoor (whole red lentils), which she transforms into a rich, nutty curry. I dream of her sambar, a lentil soup made irresistibly tart with tamarind.

• Power Plates: 100 Nutritionally Balanced, One-Dish Vegan Meals, by Gena Hamshaw. I’m no vegan, but I love legumes, grains, and vegetables. Nor am I millennial, but in this book, the crafty vegan blogger and recipe smith Gena Hamshaw has won me over to the concept of “bowls.” Not the concave tableware of that name—which I’ve always been fine with—but the concept, popularized by those born near the last century’s turn, of piling those aforementioned staples atop each other and then lashing the whole thing with a flavorful condiment. Hamshaw has a gift for combining disparate flavors and textures into something unexpectedly delicious. The recipes often involve many steps, but they pay off: You can prepare the elements of a dish in advance and keep combining them throughout the week. My household especially fell in love with a freekeh pilaf bowl with “falafels” made of sweet potatoes; and a white bean soup with leeks and roasted cauliflower (which, though it’s served in a bowl, isn’t technically a bowl). This book had me uttering a sentence I thought would never pass my lips: Pass the hemp seed and nutritional yeast “parmesan,” please.

This book had me uttering a sentence I thought would never pass my lips: Pass the hemp seed and nutritional yeast topping, please.

• Solo: A Modern Cookbook for a Party of One, by Anita Lo. The chef of the acclaimed Manhattan restaurant annisa, Lo makes herself vulnerable in the book’s opening lines: “I put the ‘Lo’ in ‘solo.’ I’ve been dumped almost as many times as I’ve been in relationships—and I can count those on less than two hands. Spread over my 52 years, that’s a lot of solo meals.” Solo—which joins a small number of exquisite cookbooks for one (see Deborah Madison’s 2009 What We Eat When We Are Alone)—will show Lo’s exes the treasures they abandoned in her home kitchen. Her narrative-heavy recipes (yes, each one gets a little story) are an inspiration to embrace time alone because you get to eat exactly what you want, without having to appease someone else’s tedious cravings. Yes, eat that artichoke all by yourself. Don’t settle for another burger at the bar or a fried-egg quesadilla at home; once you’ve got the ingredients, Lo’s dishes are generally quick and delicious, like the boneless chicken thigh fast-braised in Thai-spiced coconut milk. And when a recipe calls for half a chicken breast or half a can of chickpeas, she quickly directs you to turn the page to another recipe calling for the other half, or pointedly suggests freezing it. (She’s really made me want to invest in a decent vacuum sealer.)

• Superiority Burger Cookbook: The Vegetarian Hamburger Is Now Delicious, by Brooks Headley; and A Burger to Believe In, by Chris Kronner. I love a good burger, but here’s the thing. Eating a whole bunch of beef isn’t good for me or the climate, and veggie burgers tend to either kind of suck or are too high-tech and venture-capital-funded to pique my appetite.

This year brought a pair of books that helped me navigate the burger maze. Kronner’s paean to the beef patty reminds us that burgers aren’t something that should be acquired for a buck through a drive-thru window. Once you’ve spent up for a chunk of grass-fed chuck, ground it (requiring a simple home grinder—I got a starter-level $30 Kitchenaid attachment), delicately formed it into patties, and seared them in butter under his guidance, you’ll begin to see burgers as a special occasion event, not a daily staple. You’ll also have had some of the greatest bites of your life.

Veggie burgers tend to either kind of suck or are too high-tech and venture-capital-funded to pique my appetite.

Meanwhile, Headley, a fine-dining New York chef who opened a cult veggie-burger emporium a few years ago, has sorted out the meatless patty for all time, no synthetic “blood” necessary. Just quinoa, carrots, and chickpeas, simply cooked, combined (with the aid of bread crumbs and potato starch), and masterfully seasoned. “This is not fake meat, or vying to be,” he writes of his signature dish. “The unlikeness to the real thing is canny.”  I can’t compare them to what he slings at his shop in the East Village because I haven’t been, but the recipe makes fantastic “vegetable and grain croquettes that get put on buns,” to use his phrase. And they’re fairly easy to throw together, too. Both books go on to detail a universe of sides, toppings, and condiments to adorn their magical centerpieces.

• Finally, I have to give a shout to the cookbook machine that is Food 52, the cooking website and kitchen equipment emporium. This year’s offerings include Any Night Grilling by Paula Disbrowe, an inspiring guide to outdoor cooking and an antidote to Instant Pot mania, and Genius Desserts: 100 Recipes That Will Change the Way You Bake, by Kristin Miglore, the sweet follow-up to her excellent 2015 opus Genius Recipes: 100 Recipes That Will Change the Way You Cook. In both books, Miglore, Food 52’s creative director, rounds up distinctive recipes that “surprise us and make us rethink cooking tropes,” based on the principle that “doing something better doesn’t mean more work—and oftentimes, it means less.”