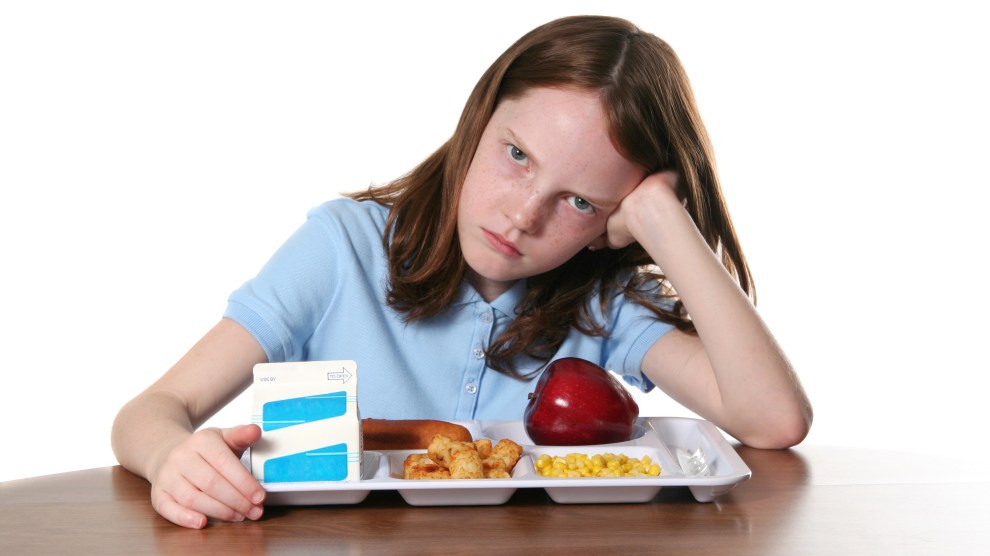 Earlier this month, the US Department of Agriculture issued new nutrition standards for school lunches that make it easier for schools to offer less healthy meals to students.

The new rules significantly dilute the high standards set by the Obama administration’s 2010 Healthy, Hunger-Free Kids Act, which required that federally subsidized school lunch programs provide meals that meet certain nutrition standards: for instance, bread that is whole-grain rich, flavored milk that is nonfat, and lower levels of sodium across the board. Those standards were meant to address growing health concerns for children across the United States, including rising levels of obesity. The changes announced earlier this month undo the whole grain, nonfat milk, and sodium rules set by former President Barack Obama.

Rolling back healthy lunch standards has long been a priority for USDA Secretary Sonny Perdue, who in 2017 announced that his department was looking at the lunch rules. Perdue, a former Georgia governor and a supporter of chocolate milk, said in a statement last year that schools should have more control over the kind of food they serve in cafeterias.

“Schools want to offer food that students actually want to eat,” Purdue said as he announced the planned changes last year. “It doesn’t do any good to serve nutritious meals if they wind up in the trash can,” he added.

But experts believe that the more nutritious meals offered in schools following the Obama-era law aren’t going in the trash. Recent studies indicate that kids are getting used to the healthier meals—they are eating more fruits and veggies at lunch, and they’re starting to like them.

“No question, if you were a high school senior when the standards went into effect, they might be harder for you to accept,” says Bettina Elias Siegel, a former lawyer and writer who has followed school nutrition policy since the Healthy, Hunger-Free Kids Act’s inception and is the author of the upcoming book, Kid Food: The Challenge of Feeding Children in a Highly-Processed World. “But for young kids coming into schools, we were showing them from the get-go that this is what a healthy lunch looks like.”

According to Siegel, the lunch standards rollback will have a huge impact on future children’s health, especially low-income children.

Mother Jones spoke to Siegel to clear up some misconceptions on school lunch policies, give context on the movement to raise school lunch standards, and explain what the new rollbacks mean for kids’ health.

Mother Jones: What was the trajectory of school lunch policy before and through the Obama administration?

Bettina Elias Siegel: Before the Healthy, Hunger-Free Kids Act, school meals were improving in a kind of slow and piecemeal fashion. They were still unquestionably too high in saturated fat and sodium and far too low in whole grains. They had outdated calorie requirements. Kids were able to select meals that had no fruits and vegetables, and so, as you might imagine, that was happening quite a lot. The rules were very much in need of an overhaul.

The Healthy, Hunger-Free Kids Act was based on nutrition standards that had been recommended by the Institute of Medicine—George W. Bush actually commissioned the IOM to come up with these standards.

It was a huge improvement, a really significant leap forward. They phased this in slowly, but ultimately, all the grain foods offered to children, like pasta, bread, and hamburger rolls, had to be 100-percent whole-grain-rich, which does not mean 100-percent whole grain—it just means that half of the grains have to be whole grain. Kids now have to take a fruit or vegetable at lunch. They also have to serve a wider variety of fruits and vegetables. Breakfast has to offer fruit, and they were going to gradually lower sodium over many years to bring it down to more reasonable levels. There are new common-sense calorie caps on meals based on the child’s grade level, and free water had to be available in the cafeteria.

Another really significant improvement of the Healthy, Hunger-Free Kids Act is what are called the Smart Snack Standards. When kids are at school, they’re not just exposed to the food in the cafeteria on that federal school meal line. There’s also often an à la carte snack line where, prior to the Healthy, Hunger-Free Kids Act, they could get junk food pretty much straight up—things they can get through vending machines, through PTA fundraisers, and school stores. And all of that now is governed by the Smart Snack Standards. While not perfect, they really reined in the worst junk food.

MJ: The rollbacks announced by USDA Secretary Purdue let schools choose if they want to include whole-grain-poor items and high-fat flavored milk—why should we be concerned about that?

BES: Thirty million or so kids eat school meals every day, and about two-thirds of those kids are getting the meal free or for a reduced price because they’re low-income children. Low-income kids are disproportionately affected by obesity and they’re less likely to be getting healthy food at home. Kids can get up to half their daily calories from school meals, sometimes even more if their school is serving breakfast, lunch, and supper.

MJ: What could be some of the impacts of these rollbacks?

BES: I can’t tell you how quickly the changes will get implemented or how many schools will take advantage of this. You do have to keep in mind, it’s not as if the schools were ordered to suddenly lower the whole-grain content in their school meals, but they now have the freedom to do so. They unfortunately do have an incentive to do so if they think it will drive more kids into the cafeterias. It remains to be seen how many districts will take advantage of this opening.

In terms of sodium, you actually won’t see a change. School meals already reduced their sodium once, and then the Healthy, Hunger-Free Kids Act envisioned two more sequential reductions. What Secretary Purdue and the USDA just did was they delayed the second reduction significantly and got rid of the third. The sodium content in school meals isn’t going to change immediately, but the whole scheme has changed.

MJ: What do you think we can expect the Trump administration to do next?

BES: I don’t think the Trump administration of its own accord was extremely motivated to change school food rules. I think this was very much driven by the School Nutrition Association. For a long time, they were lobbying quite aggressively for getting rid of the requirement where kids have to take a fruit or a vegetable at lunch. Now that they’ve achieved these rollbacks, the question is, are they going to try to push for that? Or do they have something else on their agenda? I don’t know the answer to that. It’s kind of an open question how the change of control of the House of Representatives will impact this. Maybe that’s the end of changes to the nutrition standards. I think we just have to wait and see.

MJ: Is there anything you think people should keep in mind going forward?

BES: It’s my hope that parents—who are really the consumers of school food through their children—would be more politically active around this issue. If we don’t make this a priority in choosing our elected officials, there can be real consequences for our children and for our nation. Parents care about these issues, but I don’t think they necessarily remember that when they’re at the ballot box. Who’s in the White House has a very significant impact on these policies. It’s obviously my hope that in 2020, we have a president who wants to prioritize children’s health again.

Correction: An earlier version of this article misstated whether American kids are getting enough whole grains.