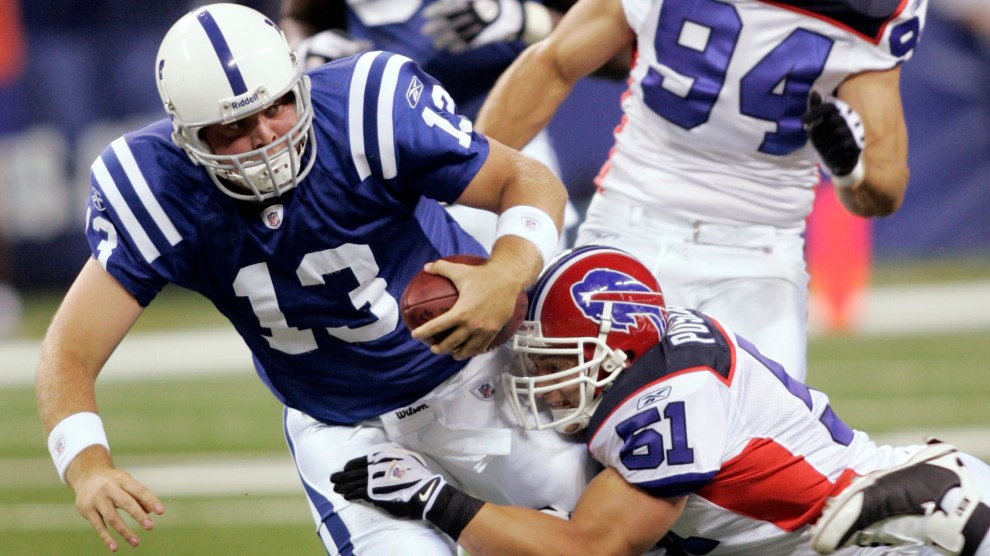 Indianapolis Colts quarterback Jared Lorenzen (13) is tackled in 2008. After retiring from football, Lorenzen weighed 500 pounds at one point. AJ Mast/AP

Tommy Tomlinson, a longtime columnist for the Charlotte Observer, didn’t think he’d have the courage to write a memoir about living as an overweight man. But that changed when he met Jared Lorenzen, a towering former University of Kentucky quarterback turned pro nicknamed the “Hefty Lefty,” at his home in Lexington, Kentucky, in 2014. Tomlinson was there to talk “fat guy to fat guy” for a story for ESPN the Magazine. “Jared Lorenzen and I are in love with the same woman,” Tomlinson later wrote. “Her name is Little Debbie, and she makes delicious snack cakes.”

Both journalist and subject had gained hundreds of extra pounds—Tomlinson at one point weighed 460. The reasons for that were complicated, he realized. “We were both fairly active people—he much more than me, but both fairly active,” Tomlinson says on the new episode of the Bite podcast. “His weight was also tied up in his emotions, his feelings of love and affection and loneliness, and all those sorts of things.”

For most of his career, Lorenzen had struggled to keep his weight under control, worrying his family and friends. But as one of his coaches once told his father, “I don’t care what he weighs—as long as he can throw the ball.” After a storied college career, Lorenzen made it to the NFL, and in 2007 he earned a Super Bowl ring as a backup to New York Giants quarterback Eli Manning. He later played in a professional indoor league before his career ended with a brutal leg injury. After retiring, he suffered from congestive heart failure and, at one point, weighed more than 500 pounds. When ESPN’s E60 caught up with Lorenzen last July, the former quarterback had made it his mission to document his journey to lose weight on Facebook.

When it comes to football players’ health woes, we’re used to hearing about the toll of repeated concussions. But the industry is also grappling with an obesity scourge, as the New York Times recently reported. After years of being told to bulk up for their jobs, some retired players—especially linemen—don’t have the tools to shed that bulk once they’re off the field, which can lead to obesity along with heart conditions and sleep apnea.

“His weight was also tied up in his emotions, his feelings of love and affection and loneliness.”

Tomlinson nearly played the game himself. A high school coach spotted him during his junior year and told him, “We could’ve made you into a football player.” So it makes sense that of all the stories he encountered in his career as a journalist, “Jared’s lives with me more than most,” he writes in his new memoir, The Elephant in the Room: One Fat Man’s Quest to Get Smaller in a Growing America. “It made me feel like not only was I not alone in those feelings but that my story might be worth telling.”

The Elephant in the Room takes an unflinching look at the many complex factors that led Tomlinson to put on extra pounds, from his emotional state—”I came to really rely on food to bring me comfort and solace when I was having tough times; it was kind of a friend in a way”—to the addictive quality of the hamburgers he came to adore—he became such a regular at Wendy’s, “they know me when I show up,” he admits. “That’s not what you want to be at a fast food place.”

Even though his quest to lose weight is not without hiccups, Tomlinson’s sense of self-worth has improved by the end of the journey. “I felt like for a long time that it wasn’t worth trying to get better—that I was just going to live my life as the fat guy until my weight caused me some problem that would just cause me to keel over and be gone,” he says. “I don’t feel that way anymore.”

Listen to the full interview on Bite to hear Tomlinson’s thoughts on what people get wrong about obesity and how he’s learned to temper “the little boy inside of him” who always wants to eat.