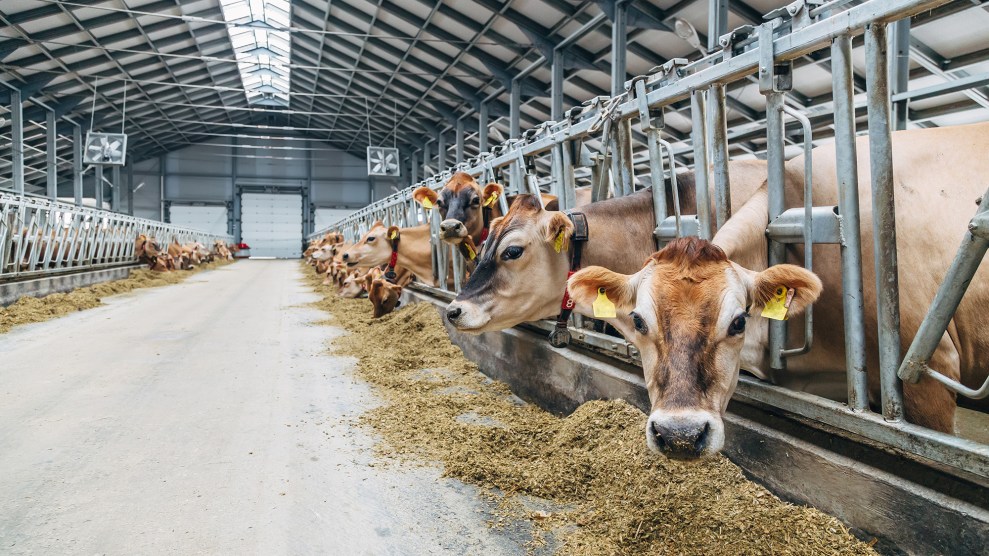 It all started with chicken wings. One evening in college, Rob, who only wanted us to use his first name, bit into the meat and suddenly thought: “I wouldn’t like it if somebody cooked and ate me.”

“I just stopped eating,” recalls Rob, who is now 27 and lives in Philadelphia. “It hit me like a ton of bricks.” He told his friends about the experience, but after they burst out laughing at him, he decided to keep his budding interest in vegetarianism to himself. Still, the experience stuck. When he met his girlfriend last August, the fact that she was vegetarian made him want to fully commit. “I joke a lot, but learning about the important of plant-based diets, and the sustainability of it is really important to me,” he says.

Last June, we asked readers why they decided to quit meat. We received nearly 500 responses. An overwhelming majority—nearly 72 percent—cited animal welfare as their main reason for making the switch, followed by concerns for their health and the environment.

Of course, readers often cited a combination of reasons, and also had some pretty personal stories to tell about how their families, as well as books—especially the 1970s classic Diet for a Small Planet, by Frances Moore Lappé—played a role. Cost was also a factor: “I was a single working mom, going to college, with a poorly paying job and I had to cut corners,” writes Pam Flohr, of Carmichael, California. “Once I educated myself, I found a lot of benefits besides cost. I can’t imagine going back to the standard American diet.”

Hear some of our readers talk about why they quit meat on the latest episode of our Bite podcast:

Here are the top reasons our readers opted to ditch meat. Responses have been lightly edited for length and clarity.

“I’ve been 100% vegan for almost 35 years. I’m from a Texan military/police family who learned to kill animals from youth. As I became more well-read on ecology/conservation, I forced myself to face the realities of harvesting/farming animals. I realized that I had other choices and could no longer kill to eat, nor ask that others kill so that I could eat. I’m thrilled to see so many others who are making choices to improve the world by embracing a more cruelty-free life.” —Willis Gravelle, 58, San Antonio, Texas

“Twenty-five years ago I was on a long drive and stuck by traffic next to a semi carrying cattle. This was in Kansas in July, so very hot. One of the steer had a nub of horn caught in the slats of the side of the truck. Every turn, every bump on the road, he was jostled by the other cattle. His eyes were wide with fear and pain and he was, I swear, screaming. I had to drive next to this for miles—could not get around the truck. After I got home I did research about factory farming and the treatment of livestock and realized that what I saw was a small part of the horror. I said then, and 25 years later still adhere to: I may not be able to change that, but I will not be part of it.”—Anonymous, 50, Edmond, Oklahoma

“I went vegetarian when I was thirteen years old after seeing a friend’s dinner for her pet snake on her kitchen counter—a mouse in a paper bag. The sight of the paper bag moving across her kitchen counter with a mouse scurrying inside disturbed me and it forced me to think about the animals I ate in a way I hadn’t before. Most people laugh when I tell them this is what drove me to vegetarianism, but I think the cognitive dissonance is a huge problem when we separate what animals we choose to love and choose to eat. I went vegan when I went to college in NYC and learned more about the health and environmental damages caused by consuming animal products (through copious documentary-watching – Cowspiracy, Food Inc.).” —Anonymous, 26, California

“In 1972 a friend asked me why do I eat meat and I couldn’t answer. In fact, when I thought about it, I really didn’t want to eat animals, and so I stopped.” —Jane Atchison-Nevel, 64, Miami, Florida

“My partner and I decided to begin eating as pescatarians after 25 years of eating without many other restrictions. We decided to do this because raising beef, pork, and poultry are some of the worst contributors to carbon emissions from our agricultural practices. For me, the decision was made strictly on helping to combat climate change. We all have to do our little part.” —Ray McAndrew, 26, Buffalo, New York

“I grew up on a family farm and we raised meat animals, plus I hunted and fished, but when I went to Penn State as a pre-vet undergrad, I was shocked to find out how vastly different commercial production is from small-scale farming. CAFOs are wasteful and filthy, even if we ignore the barren lives of animals confined 24 / 7 in overcrowded pens. I limited my meat-eating to sustainable & clean—but after a car accident in 1984, two different antibiotics in 30-days wiped out my friendly flora. I can no longer eat meat fats; they cause nasty gut problems. So perforce, other than fish maybe once a month, I eat NO meat. —Terry Pride, Boston, Massachusetts

“The environmental impact of eating meat is unsustainably destructive. As a vegetarian of 20 years, I won’t singlehandedly fix the earth, but I choose not to eat meat the same way I choose to recycle and drive a fuel efficient car.” —Anonymous, 41

“I cut meat out of my diet after suffering a major heart attack at 41. I survived the so-called, “Widowmaker” and had a 6-way by-pass. Indeed, meat was the very first thing I cut from my diet, followed by all dairy, most refined sugar and I greatly reduced my sodium intake. I then added plant-based foods to my diet. In all, it has been one of the best choices I’ve made for my health.” –Dan Bennett, 48, Saco, Maine

“I was coming down with multiple sclerosis, and suffering profoundly. It made me hyper-sensitive to others’ suffering, and I couldn’t bear to derive any pleasure from the suffering of an animal. So I went vegan, and then I’ve stayed vegan for 10 years now because there is no downside: the food is delicious, I got thinner and healthier, it cut down my carbon footprint, lowered my contribution to antibiotic resistance, and let me stop paying for the destruction and pollution of our natural world.” —Emily West, 48, St. Paul, Minnesota

“I first cut meat from my diet while working in a hospital and watching the steady stream of broken, battered people turning up in the ER and our Heart Institute with serious coronary disease brought on by their addiction to red meat and fast food. I was vegetarian for more than a decade. Then I began to read and research the terrible conditions that animals in factory farms must endure. I watched undercover videos of animals living in utter filth, pigs confined to gestation crates barely able to move an inch; calves torn from their mothers minutes after birth; chickens pumped with antibiotics, debeaked without anesthesia, and crammed into battery cages. That was enough. I’ve been an ethical vegan for 4 years now and have never looked back.” —Susan Gordon, 67, Lansdale, Pennsylvania

“All meat is mystery meat. I don’t feel meat industries can be trusted in providing products free of hormones and chemicals which may affect consumers….Even chicken, which is the meat people choose to not give up the most, seems to be the most destructive when it comes to chemicals and poor quality of life for the animals. After these ideas hit me, every other verifiable fact about how meat is unnecessary and bad for the environment fell into place like dominos that kept me farther and farther away from buying meat products.” —Katie

“A whole host of reasons—USDA policies weakening meat inspections, allowing faster and faster processing lines endangering employees health and safety; it’s expensive; it’s horrendously damaging to the planet (which hardly anyone talks about); CAFOs stink really bad and pollute our water, air, and create dead zones. I am deeply, deeply concerned about the loss of efficacy of antibiotics because of the food industry. I am down to eating meat once a month, and am looking forward to when I can cut it out completely.” —Kristin Erman, 62, Joplin, Missouri

“Several years ago, as my wife and I were returning from a trip north on Hwy 5 in CA, we came across a “shit storm”—literally speaking. The winds picked up as we were passing a massive feed-lot (the Harris Ranch) filled with cattle. There was someone on a tractor raking up the ground and the fecal dust got caught up in the windstorm and the traffic slowed from 70-75 mph to about 15 mph. The windows, of course, were all closed and we had to turn off our air conditioning as we chugged and choked along. That was a moment when we both, simultaneously, decided that there was no way beef was a safe meat to eat.” —Anonymous

“A bleeding burger grossed me out in the summer of 1972. Haven’t touched carrion since.” —John Cereza, 67, Snohomish, Washington

“I was eating a brisket sandwich when I was around 10 years old and a couple bites in I bit into a huge vein that was about 6 inches long. I can still remember vividly exactly how it felt to bite into that fleshy tube. I never ate meat again after that.”— Chloé, 21, Austin, Texas

“It was a dare. Coworker, 27 years ago. Vegetarian ever since. People ask me why I’m still veg. Health, ethics, environment, yeah. But I’ve come to see it in me for what it really is: a beneficial personality disorder.” —Dave Goldenberg, Ridgefield, Connecticut

“I had a dream about my brother’s body being burned. People were standing around talking about how good he would taste. The next day I quit eating meat. I was a vegetarian for 21 years before going vegan.” —Barbara Barnes, 61, Monroe, Louisiana

“I was 12 years old, my best friend dared me, lover of rare beef and barbecue, to not eat meat for a month and, much to everyone’s surprise, it stuck. As I grew older there just seemed to be more good reasons to keep on not eating meat (and eventually dairy and eggs) than there were to start eating it again. Compassion for animals, environmental impact, my family’s poor diet and health, a love of cooking and baking with a challenge. Though in recent years I’ve gotten increasingly annoyed with the veggie community, the diet is still an important part of my life.” —Rae, 22

“I was a hippie living on a mountain in West Virginia. We had gravity-fed water, we had plenty of wood to burn, we had horses to work the land, but no electricity, therefore no refrigeration and no meat. It was almost heaven. Have electricity now, but no meat. Still almost heaven.” —Anonymous