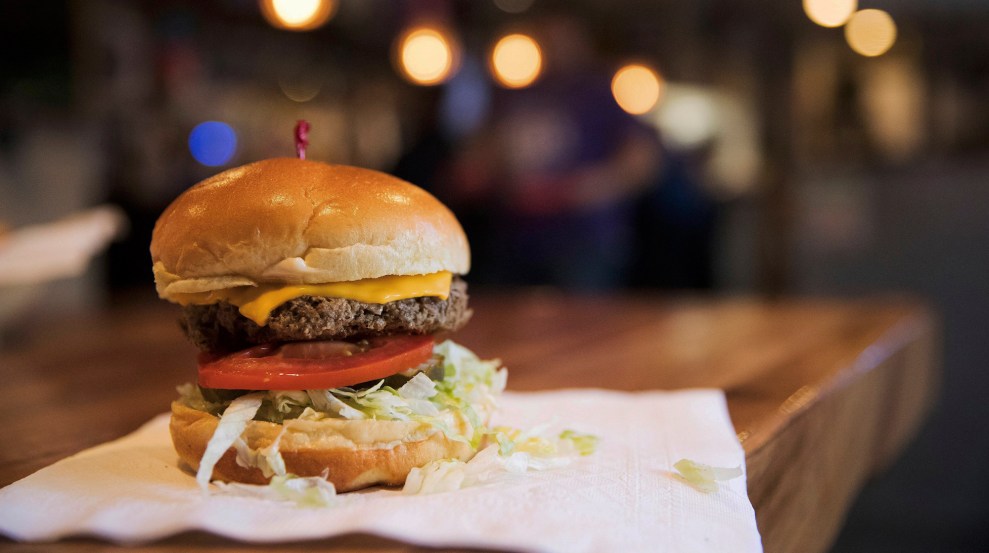 The Impossible Burger at Stella's, in Bellevue, Neb.Ryan Soderlin/The World-Herald via AP

Burger King is about to find out. On April 1, the nation’s second-largest fast-food chain debuted a Whopper option featuring a meatless patty at its 59 St. Louis area outlets, with plans to roll it out soon to its 7,200 locations nationwide, “if everything in St. Louis goes smoothly,” the New York Times reports. Burger King’s veggie Whopper is supplied by the food-tech-investor darling Impossible Foods.

At first glance of the ingredients list, Impossible Burgers look like any other mass-produced meat substitute, loaded with stuff like soy protein concentrate, yeast extract, cultured dextrose, and modified food starch. But Impossible claims it has cracked the code for “turning plants into meat” by using genetically modified yeast and soybean roots to synthesize heme, an iron-containing molecule that, the company says, “is what makes meat taste like meat.”

The use of GMO-derived heme has generated controversy in some quarters, but investors and some influential foodies are convinced. Impossible has been lavished with $387 million in venture capital since its founding in 2011. In 2016, iconic restaurateur David Chang started featuring its burgers in his upscale Manhattan restaurant Nishi for $18 a pop.

Burger King, for its part, is selling the Impossible Whopper for $5.49, about a dollar more than it gets for a beef Whopper, reports the St. Louis-based Riverfront Times. The pitch: you won’t know the difference between the two:

Here’s Riverfront Times reporter Danny Wicentowski’s assessment after taste-testing an Impossible Whopper alongside a regular one at a St. Louis Burger King on Monday:

The plant-based patty can’t quite hit the inherent juiciness of the original’s piece of beef, and the dryness of the Impossible patty became more apparent during a comparison taste-test performed under the rigorous scientific conditions required by RFT’s editorial guidelines—that is, alternating bites whilst double-fisting burgers in the parking lot.

Wicentowski added, though, that “The essential ‘Whopperness’ is there, and it hits that spot.”

Burger King isn’t the first fast-food chain to add Impossible to the menu. The much smaller White Castle debuted Impossible sliders at all 377 of its locations nationwide last year. Like Burger King, White Castle prices the meatless slider at a dollar above the conventional item. Even so, sales were stronger than expected and White Castle made them a permanent part of the menu in December, the Times reports. More recently, Roots’ drummer Questlove announced he’s “putting his name on a cheesesteak made with plant-based Impossible Meat” that will be available at 40 Live Nation concert venues across the country as well as the Philadelphia Phillies baseball stadium, according to Eater.  Back in January, yet another burger chain, Carl’s Jr., started serving burgers made by Impossible’s also-much-hyped rival Beyond Meat—which tweaks its pea protein-based meatless mix with beet juice for a blood-like effect—at all 1,000 of its stores.

But as appealing as they are to tech investors and hip-hop artists, these meatless forays into all-American fast food face uphill challenges. For one, the percentage of the US population that sticks to meatless diets isn’t growing; rates of vegetarianism and veganism have long held steady at 5 percent and 3 percent, a Gallop poll found last year. That means Burger King can’t likely rely on vegetarians to make the Impossible Whopper a hit; it will be crucial to convert a portion of its beef-loving clientele.

And Americans consume beef at one of the very highest rates in the world—and have been eating more of it in recent years. That’s despite evidence (see recent studies here, here, and here) documenting the vast environmental footprint of industrialized beef production. The upshot: Even if the globe completely switches to renewable energy, we’ll still need to cut way back on beef consumption if we’re going to keep average global temperatures from rising above 1.5 degrees Celsius.

Then there are the politics. President Donald Trump delights in displaying his love for fast-food burgers, and the all-beef patty has emerged as a rallying point for Congressional Republicans, who have recently defended it against overblown threats from the Green New Deal; Rep. Rob Bishop (R-Utah) recently denounced the environmentalist effort at a news conference while defiantly brandishing a burger. The idea that the zealots are coming for your beef burger is emerging as trope for right-wing cable hosts.  Fox’s Tucker Carlson likes to mock the idea that Americans will choose to eat less beef.

We’ll soon know if Burger King, Carl’s Jr., and their Silicon Valley partners can cut through the fog of cable TV culture war and convince hamburger-loving fast food consumers—who have grown accustomed to being wooed with bargains—to spend an extra buck to forgo meat.