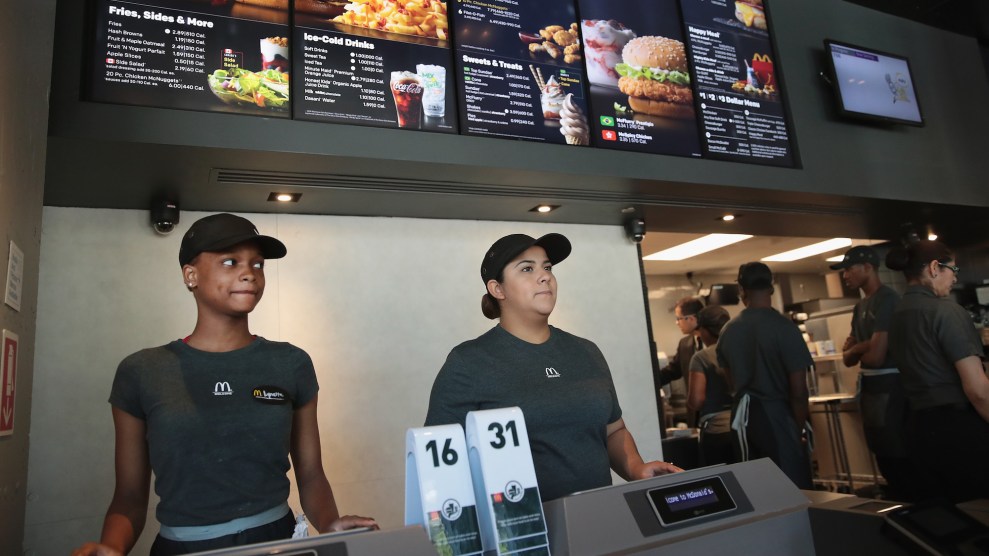 Workers making the federal minimum wage of $7.25 have a high risk of poverty, but gradually raising it to $15 would “stifle new job creation, impose undue harm to our nation’s small business owners, and harm those it proclaims to help.” That’s the gospel according to the National Restaurant Association, the trade group representing the $863 billion US restaurant industry, which employs 10 percent of the overall US workforce and half of the minimum-wage workforce.

Contrary to industry claims, the $15 minimum wage in New York City has not brought a pox upon the booming restaurant sector.

The (other) NRA’s bleak assessment came in a statement opposing a US House bill called the Raise the Wage Act, which would push the federal hourly minimum for $15 within five years and apply it to tipped workers. Two new studies show that the trade group’s concerns are likely overblown.

In an analysis of the Raise the Wage Act released Monday afternoon, the Congressional Budget found mixed results. Under the bill’s wage provisions, “the number of people with annual income below the poverty threshold in 2025 would fall by 1.3 million,” the report estimated. And it would “would boost the wages of 17 million workers who would otherwise earn less than $15 per hour, and “another 10 million workers otherwise earning slightly more than $15 per hour might see their wages rise as well.” But there would be a cost to those considerable gains: “1.3 million other workers would become jobless,” as some businesses trimmed payroll costs by cutting jobs.

But another major study, this one by University of California-Berkeley researchers Anna Godøy and Michael Reich, found a similar positive effect on wages but no ” adverse effects on employment.

Even progressive economists agree that “there is some point at which a higher minimum wage is counterproductive, leading to job losses that more than offset the benefit from the higher wage,” as Dean Baker of the Center for Economic and Policy Research, a DC think-tank, put it in 2017. The concern is particularly acute in low-income areas. It’s one thing to hike the minimum wage in California, with its median household income of $67,000, where affected businesses can raise prices to offset higher labor costs, counting on plenty of well-off consumers who who can foot the bill.

But what about Mississippi and Alabama, where median household incomes are less $50,000, and also well below the national median of $61,000? In such low-wage areas, the risk is that businesses will not be able to convince consumers to pay more, and instead will respond to higher labor costs by shrinking or shuttering their operations: the National Restaurant Association scenario.

This is uncharted territory, because no previous study has looked at an hourly minimum above $10; or a state-level relative minimum wage above .59, they note. To get around this problem, Godøy and Reich went granular, analyzing data at the county level, where there’s much more variation: “In a substantial number of counties, relative minimum wages have already exceeded .68, and reached as high as .82.”

Using the US Census Bureau’s American Community Survey, they crunched county-level employment and wage data before and after previous minimum wage hikes that occurred between 2007 and 2014, comparing the effects on high-income and low-income areas.

The results: In all regions where minimum wage hikes went into effect, wages improved and poverty decreased, with no negative impacts on jobs—even in areas where the magnitude of the hike was comparable to what the Raise the Wage Act would be in Alabama and Mississippi. In other words, the National Restaurant Association’s dire warnings did not bear out.

When I asked co-author Michael Reich about the CBO report, he told me that even with the job-loss assessment—which his research disputes—the CBO “nonetheless finds that workers will be better off.” Low-wage jobs have a high turnover rate, with workers moving often from job to job and in and out of the workforce, he said. The CBO’s estimate of 1.3 fewer jobs translates to 0.8 percent fewer jobs in any week in 2025, which means that “some workers will have jobs for 0.8 percent fewer weeks of the year but with the wage increase they will still have higher annual pay.”

I also reached out the NRA for its take on the Berkeley study. Spokesman Jeff Solsby did not comment directly on the findings or methodology. Instead, he doubled down on the group’s position. “$15 in Alabama is not the same as $15 in California,” he wrote in an email. “A $15 federally-mandated wage will cripple the 90% of restaurants that are small- and family-owned, which operate on razor thin margins.”

“Business interests have opposed every minimum wage increase since 1938,” wrote one researcher.

As an example, he pointed to New York City, which gradually raised its minimum from $7.25 in 2013 to $15 in 2018. Solsby says that in a city-wide NRA survey, “three quarters of restaurants said they would eliminate hours and half said they would eliminate jobs to deal with the new wage.” He added: “Current year data confirms the cut in food service jobs following the new wage implementation.”

But James Parrott, director of economic and fiscal policy at The New School’s Center for New York City Affairs, says the city’s jobs data tell a much different story. He has an academic paper in the works, due to be published in mid-July, showing that $15 minimum wage has not brought a pox upon the city’s booming restaurant sector.

As for Manhattan, it saw full-service restaurant jobs drop 3 percent in 2018. But, he added, there are several other factors besides the higher minimum at play in the Manhattan dining scene: explosive growth in food-delivery services; a 20 percent rise in the value of the dollar, which might have crimped restaurant spending by foreign tourists; and spiraling commercial rents. Over the entire 2013-2018 period, Manhattan’s full-service restaurant sector added jobs at an average annual rate of 2 percent, roughly equal to the national average. And the borough’s fast-food outlets have shown “much stronger job growth” than full-service restaurants  2013, with “no dip in 2018.”

The story for wages is even brighter: Outer boroughs and Manhattan restaurant workers saw their average weekly wages grow more than 7 percent in 2018, versus a national average of just over 5 percent.

In a call with reporters last week, Anna Godøy, a co-author of the Berkeley paper, noted that “business interests have opposed every minimum wage increase since 1938,” the year the federal government established the first wage floor ($0.25 per hour). Every time, the warning is the same: forcing business to boost wages for their lowest-paid workers will destroy jobs and punish the poor. Meanwhile, the restaurant industry, which relies on minimum wage workers like no other, has thrived.