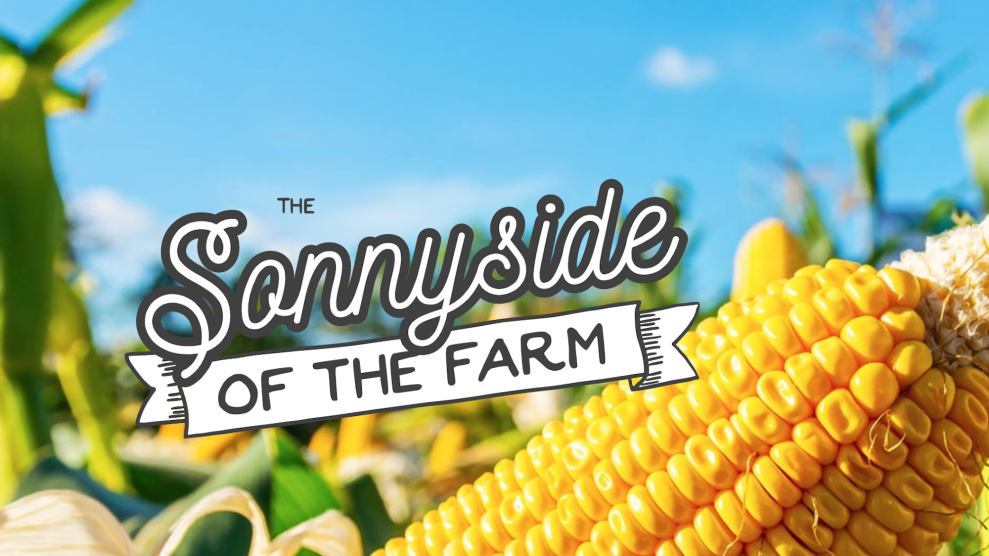 What do you call a white guy babbling platitudes? If you thought “a podcast,” have I got a new audio product for you. Sonny Perdue, former bumbling governor of Georgia and current bumbling secretary of the US Department of Agriculture under President Donald Trump, has launched The Sonnyside of the Farm. The podcast’s literally corny USDA landing page promises that Perdue will hold forth with guests on “issues facing America’s farmers, ranchers, producers and foresters today.”

From that description, you might expect to hear about Trump’s trade war with China, which has tanked soybean prices and inspired the administration to deliver $28 billion (and counting) in cash handouts to farmers, more than double the total price tag for the previous administration’s auto industry bailout. Or about the fury of corn growers at the administration’s recent ethanol policies. Or maybe even the climate chaos that has roiled farmers from the Midwest to the Southeast this year.

But in Sonnyside‘s maiden voyage, dropped a week after the House of Representatives announced an impeachment inquiry against Trump, the secretary mostly dispenses with the ag talk. His first guest is neither farmer, nor rancher, nor producer, nor forester. Rather, she is Sarah Huckabee Sanders, a career political operative now openly contemplating a run for Arkansas governor, best known for her stint as Trump’s extremely loyal press secretary. Perdue and Sanders chatted in Little Rock, and it’s worth a listen:

They open with a bit of mutual admiration. Sanders: “The president is so lucky to have you out there fighting for him.” Perdue: “I don’t think anybody fought harder than you did, and everyone admires the service you gave to the administration and the president.” After that, Perdue turns his flattery onto Sanders’ father, Trump loyalist and former Arkansas governor Mike Huckabee, whom Perdue describes as his “good friend,” a “man of the people,” and a “wonderful communicator for our values and our way of life.”

Then the two get down to business: lavishing praise on Trump, who they paint as a gruff but big-hearted leader who “loves this country” (Sanders) and “has an amazing instinctive ability to make decisions” (Perdue). Sanders makes the case that the self-evident virtues of Trump’s adult children demonstrate his greatness. They have all enjoyed “tremendous individual success” apart from their father’s business and political exploits, she insists, and yet they have “sacrificed” their personal interests to serve his administration, because they “believe in their dad, believe in their country, and want to see great things continue to happen through his leadership.” That sentiment inspires Perdue to marvel about just how much Trump “loves America.” He continues: “He doesn’t apologize for America, and that inspires me as a citizen, as a United States citizen of the United States of America—you can question the way he does things from time to time, but you cannot question his love for this country.”

Then Sanders veers toward a relevant topic: the trade war with China. After acknowledging that “we’re taking some minor economic hits” from the hostilities, she opines that China can’t “continue to come in and rip us off,” and that “at some point we have to decide who’s going to be the leader of the world, and this president has decided that as long as he’s president, it’s going to be the United States.”

That settled, the two lament, as Sanders puts it, that “the media is completely biased and out to get this president.” This insight prompts Perdue to ask what the president is really like. Here’s a snippet of Sanders’ response:

He’s one of the most fun, engaging, charming, and charismatic people I’ve ever been around. Even on a bad day he seems to make things exciting and fun; and he’s incredibly smart. I don’t think he gets credit for the command of the issue he has on such a far-reaching number of topics. Being president isn’t about knowing about one or two things; but it’s about knowing about hundreds of things and being able to talk in depth about a lot of those different things, whether it’s agriculture community, whether it’s is financing and banking or world affairs—you have to have some understanding of all those things and how they relate to one another, and he seems to really be able to take a lot of information quickly and make a decision.

As for Trump’s rough edges, those come from his background as a titan of New York City real estate, they conclude. That insight leads Perdue to marvel about “how in the world” someone from such an urban background could have developed “such a sincere affection for farmers and ranchers—time after time after it amazes me how he identifies with our agricultural community.” Sanders then theorizes that Trump’s affection for toilers of the earth stems from the fact that they “make something.” In his real estate days, she claims, Trump favored the company of construction workers and tradespeople over that of architects and engineers, because they got stuff done. (They neglect to mention Trump’s record of stiffing his suppliers.)

And on it goes: two superfans comparing notes on the virtues of their idol, while dismissing any possible foibles with a chuckle.

Given that the podcast is an official product of the USDA and features the agency’s secretary talking up Trump with the president’s former campaign adviser/spokesperson, I wondered: Was it a de facto campaign commercial, made on the taxpayer’s dime, and promoted by a federal department? And if so, did it run afoul of campaign law?

This particular episode with Huckabee Sanders confuses me. What public interest does it serve? How does it have to do with the mission of the USDA?”

I put that question to Kathleen Clark, professor of law at Washington University, an expert on campaign finance law. “Of course a government department can have a communication function,” she said, but the communication material should serve the interest of the public. “This particular episode with Huckabee Sanders confuses me,” she continued. “What public interest does it serve? How does it have to do with the mission of the USDA?”

The department’s stated mission is to provide “leadership on food, agriculture, natural resources, rural development, nutrition, and related issues based on public policy, the best available science, and effective management.” Perdue and his first guest discuss none of that, and Sanders has no background in farming or agriculture policy.

Clark said that even though Trump is locked in a fierce reelection campaign, and Sanders is openly contemplating a run for Arkansas governor, the podcast episode doesn’t violate campaign finance law because no electoral issues are directly discussed. She wondered, though, about the use of funds appropriated by Congress on a communications product that had nothing to do with the department’s mission.

I reached out to the staffs of several Congress members on the House and Senate agriculture committees, which appropriate funds for the USDA’s operations, to get their thoughts. None would talk on the record. One Democratic staffer agreed to be quoted anonymously. The staffer called the podcast a “pretty naked attempt at damage control in farm country, but I don’t know if that runs afoul of appropriations law per se,” because the administration can “argue that past secretaries have worked as ambassadors for their White Houses, and this one is the first to utilize the podcasting technology to do that.” The takeaway, the staffer said, is that “it’s a clear recognition by the administration that there is damage to control” among Trump’s rural base.

“It’s a clear recognition by the administration that there is damage to control” among Trump’s rural base.

As for me, I’m hooked on the Sonnyside of the Farm podcast, and will be listening closely. According to the USDA website, Zippy Duvall, president of the American Farm Bureau Federation, will be an upcoming guest. The Farm Bureau is a massive nonprofit insurance conglomerate closely allied with the agrichemical industry, and a major lobbying force in Washington. Duval recently attended a White House event announcing a trade deal with Japan, and was called out by Trump:

Trump: I would particularly like to recognize Zippy. Zippy Duvall. He’s been with us from the beginning. Zippy? Zippy?

Trump: Where’s my Zippy? Hi. Very good. Thank you for being here.

Trump: He’s the president and CEO of the American Farm Bureau Federation. And we’re doing really well. I—in fact, we’re doing a deal with—a big deal with Japan. But, you know, China is big—buying again. You see that China is buying very big.

Duvall: We see that, Mr. President.

Sounds like the ideal guest for a podcast that seems to exist to affirm that everything’s just fine, yes sir, with that fun, engaging, charming, charismatic, and—let’s face it—brilliant fellow now occupying the White House.