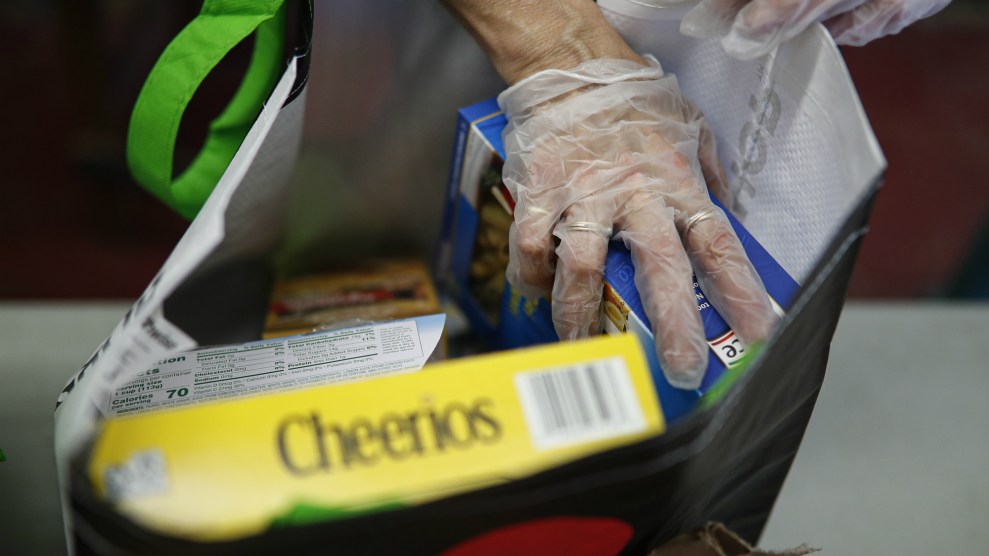 “It’s been insane,” said Sharon Goen, a 57-year-old gig worker in Las Vegas who delivers groceries. She started to describe the experience, then stopped. “I—” she began again, and then stopped again. She sighed: “I’m trying to get my words here.” Eventually she landed on a comparison: It was like the aftermath of 9/11, that mix of hurried panic and the mundane.

In the midst of the coronavirus outbreak, Goen has delivered rolls of toilet paper, reams of paper towels, and bags of rice to those would rather not risk infection by shopping for themselves. The work has put her on the frontlines of an unfolding pandemic. In the stores, Goen said, she saw people fighting over water. She texts customers right away that she can’t get them the eight cases of water they ordered, and then she worries her rating will go down. Then she worries about her money with a lower rating. Then she worries about what happens when the economy actually shuts down. So she goes out again, despite the risk.

“It’s just been horrible,” she said.

As the coronavirus crisis has sharpened and people have offloaded their disrupted routines onto the gig infrastructure, Goen and her colleagues have found themselves in high demand. They could use the work while there’s work to be had. With little safety net to support them in the event of widespread store closures, they need to make money, now.

“Every gig worker that’s working right now is doing it because they can’t afford not to—they’re living week to week, and there is no backup,” said Sarah Clarke, an organizer and Amazon Flex driver in Mountain View, California.

“It’s feast or famine,” Goen said. “We all know it’s coming, and it’s not going to be good. The money that we make these two weeks is not going to be enough….I’ve got a mortgage. Am I going to be able to stay in my house? I don’t know.”

The promise of gig work is instant reward. When delivering groceries for Instacart, driving for Uber and Lyft, or hauling packages for Amazon, giggers don’t enjoy the protections of fulltime employment. Instead, they have the ability to get paid, immediately, for doing work. But the tradeoffs in that model have always favored the companies, and the coronavirus has only heightened the ongoing reckoning with the gig economy.

On Wednesday, Uber asked employees to work from home. Not drivers, as California Assemblywoman Lorena Gonzalez, a fierce advocate for the protection of gig workers, pointed out—just “employees.” For workers in tech who are not officially employed by the company—the drivers at Uber and Lyft, the delivery workers at DoorDash, the shoppers at Instacart, the contractors at Google and Amazon—the protections are less guaranteed.

“They’re protected,” said Clarke, referring to the fulltime employees, “and we’re on the frontline.”

Except their drivers, of course. https://t.co/Puh4xIae0z

Companies have taken some measures to protect their contractors. Instacart rolled out a sick-pay policy, including 14 days of pay for anyone affected by the coronavirus. DoorDash issued guidance for merchants and said  in a statement that it is working on “introducing a program to assist Dashers financially if they are diagnosed with COVID-19 or put under quarantine by a public health agency.” Amazon has created a $25 million initial fund to help contractors. Lyft told Mother Jones it has “an internal task force” and is “prepared to take action as needed.” Uber offered “financial assistance” for 14 days to those diagnosed with coronavirus.

But these minimal protections from gig companies are being served up at the same time “they’re trying to offer incentivizes to keep us working,” Clarke said. On Friday, Shipt, a delivery service owned by Target sent one delivery person a notice that “due to increases in unavailable items, order volume, and in-store lines,” lateness won’t count against them. It also sent a bonus offer for delivering this weekend. “Instacart is pushing it—they’re pushing, pushing, pushing,” Goen said. She gets one notification after another: “‘Ready for a batch? Ready for a batch? Ready for a batch?’ Constantly.”

I asked how it made her feel that the companies were pushing her to deliver in a time of peril. “I hate to say I’m used to it,” she said, “but I’m used to it.”

The crisis has spurred a fight to guarantee contractors a safety net before the work dries up. Gig Workers Rising, an advocacy group for app and platform workers, is demanding paid sick leave through a petition with thousands of signatures. Sen. Mark Warner (D-Va.) has pressed for similar measures.

Realizing they might soon “have no income,” Clarke said, independent contractors are taking what opportunities they can get. As non-employees, they aren’t guaranteed much of anything by the companies that employ them in everything but name.

“Drivers are obviously at risk,” said a spokesperson for Mobile Workers Alliance, a drivers-led organizing group. “Because these folks are misclassified as independent contractors they’re not granted the kinds of basic protections that other folks rely on.”

The precarity isn’t some accident; the whole model of the gig economy is predicated on shifting risk onto the workers. I spoke with Ken Jacobs, the chair of the Berkeley Labor Center, before the pandemic. “What we have, especially in terms of the gig companies,” he told me, “is a set of companies who are trying to shield themselves behind an independent contractor model…to avoid the responsibilities of being an employer.”

In California, the state Supreme Court’s Dynamex decision in 2018, which created a simpler test for who is and is not an employee, laid the groundwork for Assembly Bill 5. The measure ushered in a sweeping change to labor regulations that makes it harder for tech companies to misclassify workers as independent contractors. AB5 is being challenged in federal court, with gig companies arguing that their gig workers aren’t employees. Meantime, workers are waiting on reclassification under the new law. On Thursday, in one complaint filed against Uber, Shannon Liss-Riordan, a lawyer famous for taking on the company, cited coronavirus as a reason reclassification must happen now.

“Faced with the choice of staying home without pay and risking losing their access to their livelihood, including housing, food, and other necessities of living,” wrote the lawyers, “Uber drivers across California will continue driving.” They call Uber’s delays in reclassifying drivers as employees an “immediate danger.”

An Uber driver in Austin—who wished to remain anonymous for fear of backlash from the company—said she knows it’s dangerous to work now, but “either I work, get what I can, or I can’t survive.” She worries about paying her utilities over the next few months. Already, traffic is way down. Her pay is sagging. Driving in a crisis, she feels “disposable” to the company. But at least the pandemic was revealing to the country the precarity of her work—that this is how companies are allowed to treat workers.

“I think this may help destroy the gig economy,” she said. Maybe, she allowed, that’d be a good thing. “People will realize you can’t treat people like this.”