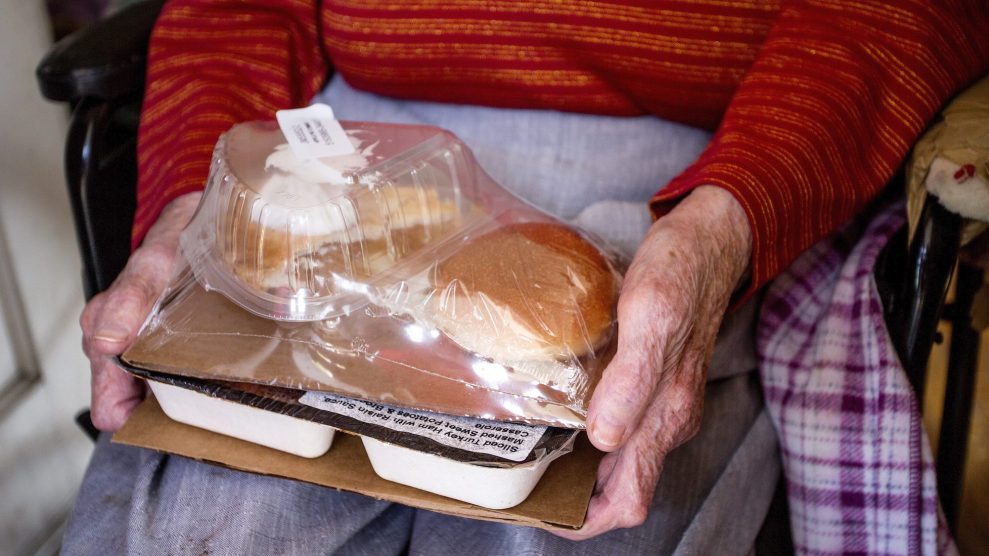 For 66 years, Meals on Wheels has been providing regular meals for elderly Americans—along with a host of other services like companion visits and errand shopping. Today serving 2.4 million people, the service is often the one factor that separates an elderly person from both hunger and social isolation. It has managed to function through extreme weather and occasional volunteer shortages, but the novel coronavirus has presented the organization with unprecedented challenges.

“We have never had anything like this at this scale or the magnitude that we’re having now, at least in our lifetime,” said Ellie Hollander, the CEO of Meals on Wheels America.

The immediate concerns the coronavirus pose to Meals on Wheels are both short and long term. In the short term, requests for service have expanded as the government urges many sectors of the population to stay home, especially the elderly. Many Meals on Wheels’ volunteers are 60 years old and older, a population that is the most threatened by COVID-19. In the long term, there’s no predicting what’s going to happen with the food supply chain as the epidemic spreads, and financial strains from the plunging stock market could jeorpadize funding, not to mention how political skirmishes will affect decisions on over who gets how much aid. All of this has forced the organization to shake up its programming and pay close attention to multiple moving parts.

“We need to pivot quite quickly to meet the expected increased rapid demand for meals,” Hollander said. “Our model is more than a meal. It’s also about making sure we’re checking on people and giving them the social connectedness…and not compromising their health. All of that is happening simultaneously, but we’re doing the best we can with the scant information.”

One of CDC’s recommendations has been that everyone should cut non-essential travel and maintain social distances. Meals on Wheels has already suspended group meals it hosts at senior centers that are accessible for area elderly. That’s not a small programmatic change, considering in-center meal services are offered by 70 percent of Meals on Wheels branches. The Meals on Wheels of Central Maryland, for instance, offers meals through 35 senior centers every day, providing food for more than 2,000 elderly. Hollander suggests that this may soon change. Rather than providing group meals, she said the organization is hoping to replace them with takeout style pick-ups.

In Maryland, changes also are coming in the form of companion check-ins via phone rather than in person and providing more non-perishable or frozen meals—all in anticipation of what comes next. “There’s a real unknown here,” said Stephanie Archer-Smith, the branch’s executive director. “What we’re doing is really taking incremental steps. Each week as we learn more, part of our system or delivery may change.” In the meantime, she’s seeing an increase in requests for services, and if things get worse, “I suspect…we’ll see more volunteer cancellations.”

For now, Archer-Smith said the organization is trying to treat this in much the same way as they cope with a severe storm, say, or a blizzard. But unlike natural disasters, this epidemic has no predictable trajectory and disruptions could last for months. Dr. Anthony Fauci, who directs the National Institute of Allergy and Infectious Diseases, predicted that it could be months—or years—before a vaccine is available. Archer-Smith said months-long contingency “would just be tough operationally. I’m not sure how that would work, frankly.”

Then there is the question of the food that they serve. According to Hollander, most of the provisions for Meals on Wheels come from bulk suppliers—the same suppliers other organizations with a heightened need rely on. “Hospitals and everybody else are probably looking to same vendors,” she said. “We may need to substitute some ingredients or some products that we wouldn’t necessarily normally provide. We need to be able to do that.”

To meet the expanded need, Meals on Wheels sent an appeal to the federal government earlier this week for emergency funds and transportation services to replace volunteers who might need to self-quarantine. Under normal circumstances, about 40 percent—$600 million—of the organization’s budget come in the form of government funding. On Wednesday, House Democrats introduced an emergency funding bill that would add $250 million in meal funding for low-income elderly, much of which would be directed to Meals on Wheels. The bill has hit a roadblock: House Republicans. After indicating that Congress would take a week-long recess, Senate Majority leader Mitch McConnell (R-Ky.) has backpedaled, allowing for bill deliberation. Still, its future remains precarious.

The remaining funding of its $1.5 billion annual budget largely comes in the form of private donations. With the massive stock market decline in response to coronavirus anxiety, Hollander is acutely aware of the longterm threat to that income stream. “I am very concerned that people will not have discretionary income that they feel they can contribute,” she said, as regular donors might see their stock profiles decimated or are unable to work due to quarantines. “In general,” she said, “the pot is shrinking.” That funding has been a longstanding concern, even before the pandemic arrived. Less than two percent of American philanthropy goes to feeding underserved seniors, and according to the organization’s own statistics, they are only able to meet 20 percent of the need of the nation’s food-insecure elderly.

Despite so much uncertainty, Meals on Wheels leaders try to remain confident that the American public will be generous. “When there is a disaster, people will step up,” Hollander said. “Now we’re talking about a disaster that’s affecting everybody in some way.”