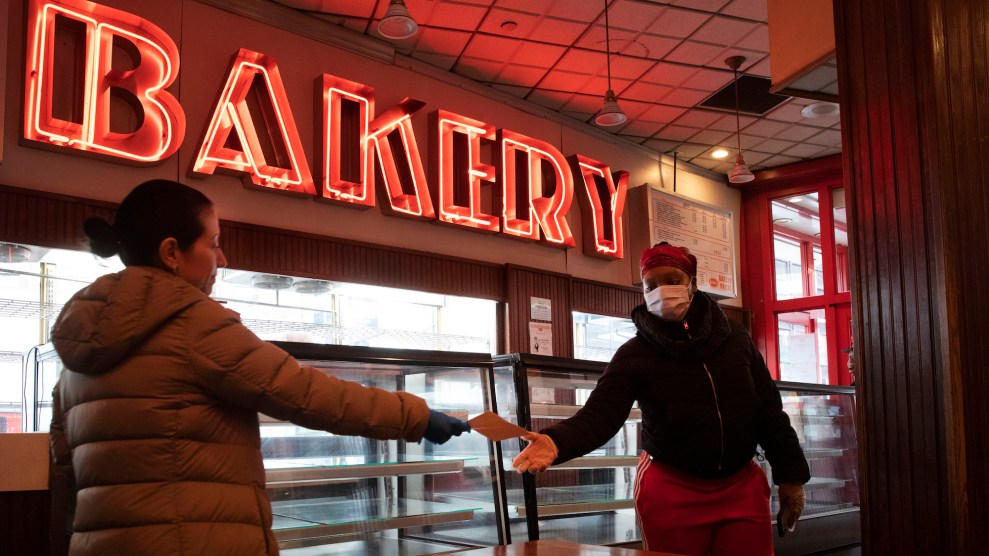 An employee of Junior's Restaurant in Brooklyn picks up her paycheck, Thursday, March 19, 2020. The restaurant company, which has closed its four locations due to the coronavirus, has laid off 650 of 850 employeesMark Lennihan/AP Photo

Like many people in our food-obsessed age, I’ve come to see cities as assemblages of delicious things to eat. An urban culture comes to life through its diverse eateries and the thrum of their kitchens. And so for me, one of the most appalling things about the coronavirus is the pox it has placed upon restaurants.

The US restaurant industry employs 12.3 million people and generates $899 billion in annual sales. Until very recently, Americans devoted more than half of their food expenditures to eating out. Then came the coronavirus, and the rise of “social distancing” to slow its spread. A widening swath of cities and states have ordered restaurants to either close or offer takeaway-only service, causing revenue to collapse in an industry that already operates on razor-thin profit margins.

The nation’s eateries will likely lose $225 billion in sales and shed as many as 7 million jobs over the next three months, warned the industry’s main lobbying group, the National Restaurant Association, in a letter sent to President Donald Trump and congressional leaders on March 18.

The association called for a massive federal bailout package, including a $145 billion “recovery fund” to help cover operations and pay employees; $35 billion in community-development block grant for disaster relief for “regions and communities especially hard-hit, similar to a program used to help areas following the September 11 attacks”; and $100 billion in “federally backed business interruption insurance to help sustain businesses and their employees over an anticipated long-term recovery.”

“Buying gift certificates online can be a way of sending a restaurant a gesture of good will, but it doesn’t reach all small businesses and it doesn’t help workers.”

All told, the restaurant group’s request comes to roughly $325 billion—more than a third of the size of the entire 2009 stimulus packaged approved by President Barack Obama to pull the economy out of recession in 2009. Of course, in asking for a big aid package at a time of severe economic crisis, restaurants join a growing list of industries looking to Washington for help. Other such industries include airlines, casinos, cruise operators, and Big Oil.

But restaurants are different. Not only do they employ around one in ten US workers, they’re also a key thread in the the country’s social fabric. It’s impossible to imagine our cities without distinctive, independently owned eateries—and these are precisely the kinds of establishments that lack corporate cash hoards or easy access to credit to withstand weeks or months with limited or no business.

And there’s a growing consensus among restaurant operators that without outside help, independent restaurants will fail in staggering numbers. “There is going to be a huge shakeout, especially among the small neighborhood restaurants that live payroll-to-payroll,” said Rick Bayless, who runs the Frontera group of restaurants in Chicago, where customers are barred from entering restaurants until March 30 at the earliest. “Not to mention for all the ancillary businesses that supply and service the restaurants.” Already, Bayless said, the city’s 500,000-strong crew of restaurant workers is essentially “furloughed,” with the exception of a skeleton crew of those who work at “the few places that can afford to keep people on to do takeout.”

Social media is full of calls to support restaurants while maintaining social distance by ordering takeout and buying gift certificates, giving restaurants cash now for meals that will be consumed when the pandemic ends. Such efforts are valuable, but not enough, says Karen Leibowitz, a San Francisco restaurateur and executive director of the restaurant-sustainability nonprofit  Zero Foodprint. Many smaller restaurants lack the resources to rapidly shift to and survive on a takeout-only model, she said. And “buying gift certificates online can be a way of sending a restaurant a micro-loan and a gesture of good will, but it doesn’t reach all small businesses and it doesn’t help workers,” Leibowitz said.

As a group, non-supervisory restaurant workers make an average hourly wage of $13.96, according to the Bureau of Labor Statistics. Nationwide, less than a third of them have health insurance.

Leibowitz’s husband, chef Anthony Myint, co-founder of Mission Chinese Food in San Francisco and New York City, says that the crisis hit San Francisco at a time when restaurants were already slumping and their workers were struggling with a stratospheric cost of living. Those factors “meant many of us were barely holding it together prior,” he said. “Some people will go out of business or not reopen to be certain.” To limit the damage, “it just comes down to capital—whether it’s rent and tax relief, bailouts, etc.,” he said.

In Chicago, Bayless and other chefs have banded together to urge Illinois Gov. J. B. Pritzker—an heir to the Hyatt hotel fortune—to deliver immediate aid. In a video posted to Twitter directed at the governor, Bayless focused on the plight of workers. He called for “emergency unemployment benefits to all hourly and salaried workers furloughed during this crisis,” an elimination of the payroll tax until the crisis ends, and “rent and loan abatement for workers impacted by the closure of a restaurant. ”

We are living in perilous times. But let’s not forget the most vulnerable among us. And those who strive daily to make our city one of the best and most delicious places in the country. pic.twitter.com/Rya86FwtVf

Katherine Miller, vice president of impact at the James Beard Foundation, says restaurants are hanging in there for now, but we’re still in the “early days” of the crisis. Heavy restrictions have been in place for just about about a week; “unfortunately, we will probably start to see permanent closures at scale at the 60 day mark, and potentially much worse than that at the 90-day mark,” she said. “Independent restaurants are a huge driver emotionally and financially to local communities,” she said. “They are going to need resources to hold onto their professional staff; resources to prepare to reopen when this crisis passes; and their voices have to be heard in any discussion of a federal recovery package.”

“We’re seeing the vulnerability of the restaurant world laid bare.”

In New York City, where restaurants are restricted to takeout, Manhattan waiter Enrique Diaz is among the hundreds of thousands of laid-off hospitality workers. “My last day of work was Sunday night,” he said, and his restaurant’s owners are “talking about being closed for two months.” Diaz says he’s weathering the storm so far, and expects to collect unemployment benefits soon. But he worries about the many undocumented immigrants who work in the shadows of the city’s restaurant scene. “My coworkers without documents will have it very rough,” he said. “No safety net, no way to apply for unemployment.”

The coronavirus pandemic has sent the entire industry, from owners to dishwashers, scrambling for a survival strategy as income vanishes. “We’re seeing the vulnerability of the restaurant world laid bare,” Leibowitz of Zero Foodprint said. “It will take a concerted governmental response to keep the industry going over the next few months.”