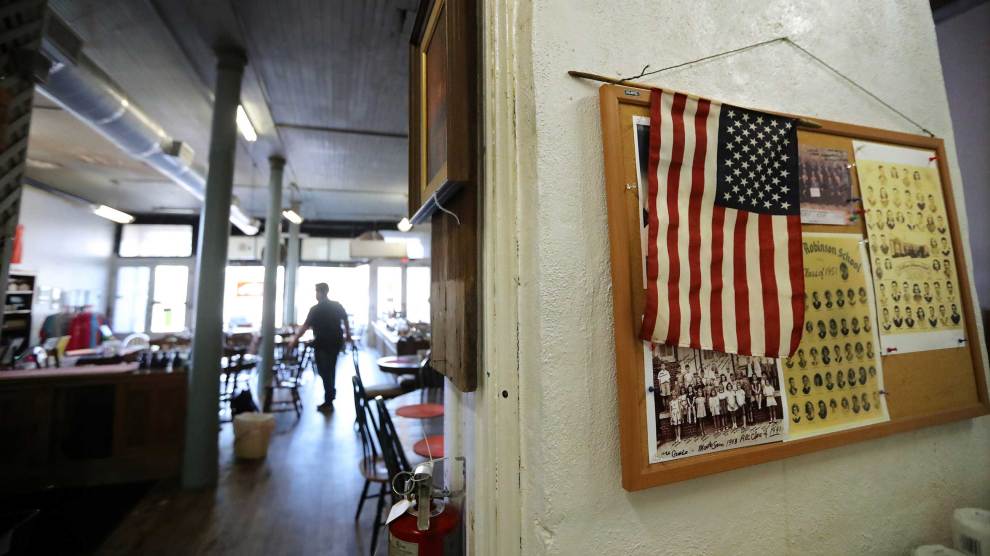 For the last five years, John Gianoulidis satisfied Atlanta-area residents’ craving for Greek food with gyros and baklava from his two diners, both called Kafenio, and a coffee shop. As paralysis from the coronavirus took hold last month, he made the tough decision to shut down one of the diners, which catered heavily to now-furloughed Delta Airlines employees, and laid off 14 employees from all the locations. He turned another location into a counter-service-only affair, and is now working seven days a week at both the diner and the coffee shop. Though he’s seen some demand for takeout meals, business has dropped off dramatically. “I’m just keeping my head above water,” he says.

But Georgia Governor Brian Kemp’s announcement on April 20 that certain businesses in the state, including restaurants with dine-in service, would be allowed to reopen at the end of the month—and that no local ordinances can prevent them from doing so—did nothing to assuage Gianoulidis’ angst.

Kemp, backed by new guidelines released by President Donald Trump for reopening the economy, framed his decision as an effort to “get Americans back to work.” But as far as Gianoulidis was concerned, Kemp’s policy was just a way to shift the burden of the virus from the state back onto people like him. “Guys, this is about screwing the working class and small business,” he posted on Facebook that night, “not about helping us.”

Georgia has nearly 22,000 confirmed cases of the novel coronavirus but also has one of the country’s lowest testing rates per capita. Current projections from the public health research organization Institute for Health Metrics and Evaluation show the state should not begin to consider easing current distancing policies before mid-June. “High-contact environments”—restaurants, nail salons, barber shops—are “exactly the kind of places that we need to have maintain closure for the moment,” Athens, Georgia, Mayor Kelly Girtz argued. “It’s like telling the quarterback, ‘We don’t have a helmet for you, we don’t have pads, but get out there on the field and just try not to get sacked.’”

“It’s like telling the quarterback, ‘We don’t have a helmet for you, we don’t have pads, but get out there on the field and just try not to get sacked.’”

Dozens of Atlanta restaurateurs joined Gianoulidis on Facebook to decry Kemp’s announcement and tell customers that their dining rooms would remain closed. “The safety of our family and yours is more important than a quick buck,” wrote a staffer at El Ponce, a Mexican eatery. “On one hand, we need to be open to be able to survive, but we only have one opportunity to get it right, there are no second chances” wrote Bob Amick, owner of Concentrics Restaurants group, which owns restaurants throughout the city including TWO Urban Licks, Parish, and Bully Boy. “A rushed reopening could be a nail in the coffin for many companies.”

Gianoulidis is still grappling with how to avoid spreading the illness in the two eateries he’s kept open for counter service. His employees wear gloves and cloth face masks; he marked six-foot measurements on the floor with tape to keep customers apart; closed the public restrooms; told employees with any sign of sniffles to stay home for at least a week; even wrapped his payment system in plastic wrap that gets replaced after each use. “It slows the pace of service, but, excuse my language, tough shit,” he says. “I’m not an epidemiologist, so I’m going to take all the precautions that I can.”

But inconsistent messaging and misinformation about the virus’ risk have complicated his efforts. Most customers are respectful of his new policies, but he’s had a few visitors reject the constraints. One customer came up to the counter, got close to the cashier, and called the pandemic a “media-driven” conspiracy, insisting “no one is really getting affected by this,” Gianoulidis says. The manager promptly asked the customer to leave.

One customer came up to the counter, got close to the cashier, and called the pandemic a “media-driven” conspiracy.

It remains to be seen if Kemp’s announcement will encourage a steadier stream of conspiracy theorists at Gianoulidis’ coffee shop. In the meantime, he’s worried about what Georgia’s reopening might mean for his financial future. His attorney thought he might be able to make an insurance claim for business interruption when the state went on lockdown, but it will be much harder to make that case once he is technically allowed by the governor to fully operate.

A group of high profile chefs, including Thomas Keller (owner of the French Laundry) and Wolfgang Puck, recently banded together to form the Business Interruption Group, a nonprofit whose mission is to pressure insurers to pay out claims on policies that did not explicitly include an exclusion for viral pandemics. John Houghtaling, their general counsel, filed suit on behalf of Thomas Keller’s Restaurant Group to demand that the restaurateur’s insurer pony up for the lost business and property damage caused by the deadly virus that “physically infects and stays on surfaces of objects or materials” for up to 28 days, as the lawsuit argues. The Independent Restaurant Coalition, organized by chefs including Tom Colicchio, Naomi Pomeroy, and Kwame Onwuachi, states that ensuring business interruption insurance covers COVID-19 is one of its main four goals.

“Have I served the public in good conscience?”

Though he’s not planning to throw open Kafenio’s dining room’s doors on Monday, Gianoulidis, like many restaurant owners and legislators, has started to imagine how he will one day safely operate with full service again. On Thursday, Kemp released 39 guidelines sit-down restaurants will have to adhere to before planning to reopen, including screening employees who seem sick or feverish; requiring employees to wear face masks at all times; capping tables at six guests and maintaining at least six feet distance between tables; prohibiting salad bars and buffets; and providing hand sanitizer to patrons. Reporters at the Atlanta Journal-Constitution talked to a few restaurateurs who are preparing to flip their closed signs next week, including the owners of Escobar Restaurant, which is co-owned by Mychel “Snoop” Dillard and rapper 2 Chainz. Dillard called the health precautions “a huge priority for us.”

Gianoulidis doesn’t feel ready to follow suit. When he does, he imagines he’ll pull half of his tables and make sure to continue asking himself: “Have I served the public in good conscience?” He thinks often of his parents, Greek immigrants who emigrated to New England in 1963. They “worked their tails off” in factories to save up enough to open a little pizza joint in Connecticut. Their story reminds him to keep moving forward right now. And if things in Georgia continue to unravel, he says, “Thankfully, I also have Greek citizenship.”