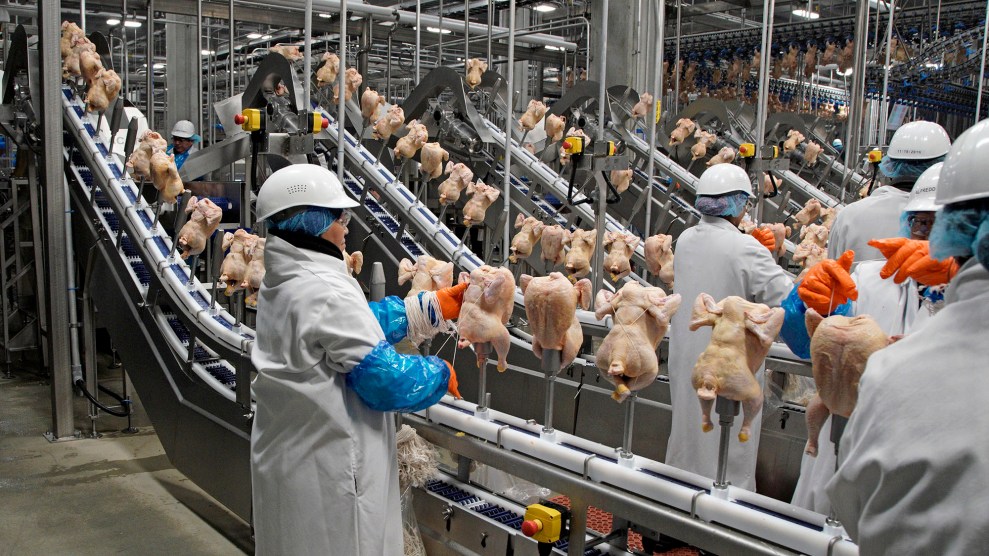 Nearly 230,000 people in the United States work in poultry processing, churning out America’s favorite meat. Even in normal times, it’s a tough trade.

A worker I’ll call Laura filled me in on some of the particulars during a phone call after her shift at an Arkansas chicken-processing plant run by meat giant Tyson. (She asked me not to use her real name to avoid reprisal from her employer.) During a normal work day, she makes the same motions over and over as she slashes chicken carcasses with a heavy knife for hours on end. Her muscles ache when she gets off work, and her hands often tingle when she wakes up in the morning. (Federal research shows that poultry workers incur repetitive-motion and other injuries at much higher rates than the overall workforce.)

Then there’s the constant and sometimes overwhelming smell of chemicals like peracetic acid, used to sterilize chicken parts at various points as they move down the line. When the the smell is particularly strong, “it’s awful—it makes your throat and chest hurt and gives you headaches,” she says.

Now, on top of the usual stresses, Laura, a 40-year-old immigrant from Central America, works in fear of catching COVID-19 on the job and spreading it to her family. The last week has made it clear that the virus is descending on the meatpacking industry. Three workers at a Georgia poultry plant run by Tyson have died from the infection, the New York Times reported last week. On April 12, Smithfield—the world’s largest pork producer—announced it was shutting down a massive hog-processing facility in Sioux Falls, South Dakota, “indefinitely,” after 238 of the plant’s 3,700 workers tested positive for COVID-19. Two workers at a Greeley, Colorado, beef facility run by Brazil-based meatpacking giant JBS have also died of COVID-19, and the company announced it would close the plant until April 24.

As coronavirus infections rise in Arkansas, Laura would prefer to quarantine at home, but she has to continue working to pay rent and bills, she said. She joins millions of other workers who are trying to choose between risking their lives to keep their jobs or giving up their financial stability—no easy choice given the worsening economic outlook.

Tyson has taken steps to reduce the risk of spreading the virus within its facilities. According to a March 31 press release, employees now have their temperatures taken as they enter the building. That release also stated that Tyson would offer “protective face coverings for production workers who request them,” the release stated.

But Laura said that getting her temperature taken at the front door provides little comfort, because she knows that people can have COVID-19 without showing symptoms like a fever. And that when she requested a mask, the company had yet to provide her with one as of last week.

“We’ve been working to secure a supply of protective face coverings for production workers,” Tyson spokesperson Worth Sparkman wrote in an email on April 13, adding that the company had just started to require facial coverings.

Social distancing within the plant remains elusive, Laura told me last week. She works in the evisceration department, where employees can stand at least 6 feet apart from each other. But in the busy de-boning area, people work very close together. And all the employees, including from her section, eat together in the cafeteria at the same time, making it difficult to maintain a safe distance. The company did consistently provide hand sanitizer at the plant’s entrance when the crisis started several weeks ago, but more recently, when workers arrived at the plant to start their shift, they were told that sanitizer had run out, Laura said.

Sparkman said the company is working to improve conditions, implementing social distancing based on Centers for Disease Control and Prevention and industry guidance, and in some cases, “slowing production lines.” He added that the company is in the process of installing workstation dividers and barriers in break rooms. Sparkman said he’d immediately investigate the reported lack of sanitizer at the front door of the Arkansas plant. “In addition to hand sanitizer, all of our plant locations are equipped with multiple handwashing stations both inside and outside production areas,” he said.

At 40 hours per week over three months, the bonus amounts to about $1 per hour.

Tyson announced on March 31 it would deliver “‘thank you bonuses” of $500 to front-line meatpacking workers. The catch: The payments won’t be delivered until the first week of July, meaning that workers will have to maintain their jobs until then to benefit, though “excused absences—such as those involving illness or childcare issues—won’t affect a worker’s ability to qualify for a bonus,” Tyson spokesperson Gary Mickelson wrote in an email. At 40 hours per week over three months, the bonus amounts to about $1 per hour. Laura, who says she currently makes $13.40 per hour, says that amount is “insufficient” to compensate her for the risk she’s taking by showing up to work every day.

As for employees who get sick and have to miss work during the crisis, Tyson will pay them for missed work—but at just “approximately 60 percent” of their normal earnings, Mickelson added.

Magaly Licolli, executive director of Venceremos, an Arkansas workers’ rights group, says she hears the same story from dozens of poultry workers who come to her for help: They’re “not feeling safe going to work,” and they can’t stay home because they need the money. Many poultry workers have spouses who have been laid off during the economic crisis, which puts extra pressure on those still employed to work through the pandemic.

Many workers have spouses who have been laid off during the economic crisis, which puts extra pressure to work through the pandemic.

I got a similar story from workers at a plant in Bryan, Texas, owned by chicken giant Sanderson Farms, in an April 7 conversation. One worker told me early last week that she works closely on the chicken-wing line with six or seven other workers. When I asked if the company was making masks available, she just laughed—meaning no.

In a March 24 letter to Sen. John Cornyn (R.-Texas), the Centro de Derechos Laborales, which advocates for workers at the Sanderson plant, laid out concerns among its members. “We work elbow to elbow on the production line,” the letter states. “Management has not instituted any type of social distancing. We have not been given any masks to protect ourselves.” It added:

In our plant, we are exposed to a chemical called peracetic acid that also causes a dry cough. The chemical is sprayed on the chicken throughout the process. We know that workers might think their cough is because of peracetic acid when it is actually because of COVID-19. Many workers inside the plant have a dry cough. They have not been given any respiratory protection from the virus.

The workers take lunch breaks in a tightly packed cafeteria. Martha Ojeda, senior national field organizer with Interfaith Worker Justice, heard from a worker that Sanderson had placed two tented tables outside, offering them as a space for lunching while maintaining social distance. But the area is near a facility where feather and other slaughterhouse waste is burned, creating an intolerable stench. Ojeda reports that workers told her that the company finally began handing out masks to workers on April 10. Sanderson has yet to reply to my repeated requests for comment about conditions.

Amid the safety concerns, Sanderson has tried to appeal to its workers’ sense of duty as essential personnel during a crisis. In a March 20 memo, Sanderson’s president, Lampkin Butts, urged employees at a plant in Bryan, Texas, to stay the course as they navigate the COVID-19 crisis. “Some employees have been asking why they should continue coming to work in light of the federal government’s recent guidance to avoid groups larger than 10 people,” Butts wrote. Comparing the Sanderson workforce to front-line health care and pharmaceutical workers, the exec warned that “if people like you and me, stop coming to work every day, people will go hungry.”

“If people like you and me, stop coming to work every day, people will go hungry,” Sanderson’s president, Lampkin Butts, told workers.

Butts exhorted Sanderson workers to “look at this crisis as [an] opportunity to serve,” adding that “we need to come together as a Company and a Nation, and continue to provide the critical supply of food that we all need.” Butts assured workers that the company, “in consultation with physicians, is taking aggressive steps to limit the possibility of your being exposed at work.”

On March 27, the company announced a $1 per hour “attendance bonus,” to “show our appreciation for their hard work and contribution to maintaining the U.S. food supply during this critical period.” The press release added: “Employees must have perfect attendance during the week in order to earn the bonus.”

At an April 7 press conference, Vice President Mike Pence echoed Butt’s message about food system workers’ duty to keep working. Noting that concern among food industry workers for their safety had led to “incidents of worker absenteeism,” Pence addressed them directly: “You are vital,” he declared. “You are giving a great service to the people of the United States of America and we need you to continue, as a part of what we call our critical infrastructure, to show up and do your job.” In return, Pence said, the government will “work tirelessly” to ensure safe workplaces.

But as COVID-19 rips through the meatpacking industry, leading to temporary closures and fear of more deaths, the poultry workers I talked to said they don’t feel sufficiently protected from the virus. Because of their low wages—they earn a median hourly wage of $13.23, according to the Bureau of Labor Statistics—they live on the economic margins, relying on their most recent paycheck to pay bills. Many of them are undocumented immigrants and don’t have access to unemployment benefits or the $1,200 per worker emergency benefit embedded in the recent stimulus bill.

So the people who power our steady supply of chicken do so at an even higher level of stress than usual. Laura, the worker in Arkansas, told me that she and her coworkers are convinced that if an infected person does enter the facility, “one way or another, we’re all going to get sick with this disease.”