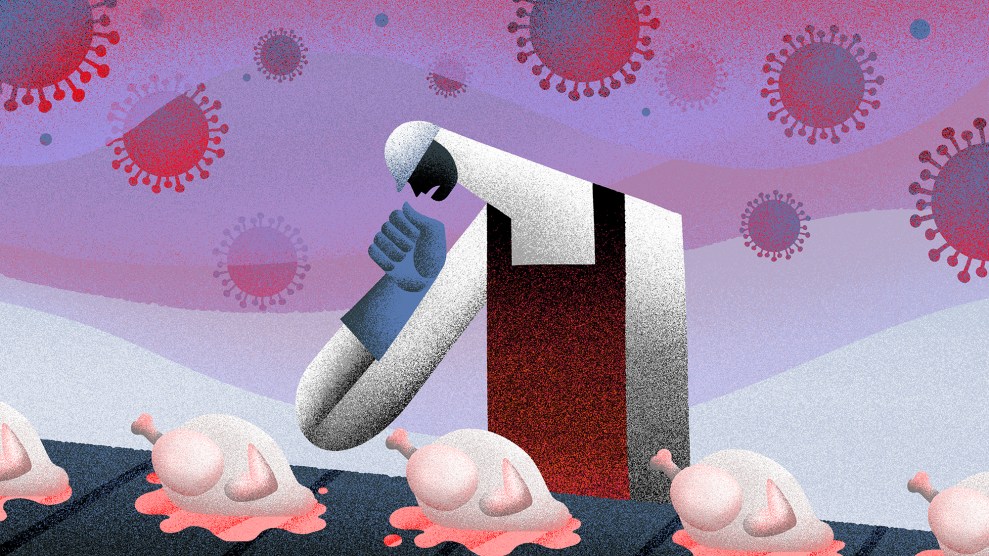 A typical poultry, pork, or beef plant employs hundreds of people—by and large immigrants, refugees, and people of color—toiling shoulder to shoulder to dismember and break down carcasses moving down the kill line at rates as high as 390 cattle, 1,295 pigs, or 10,500 birds per hour. Meatpacking workers have always faced hazardous conditions and high injury rates, and their tight working conditions make them highly susceptible to viral pathogens. What spreads inside a meat factory doesn’t stay within its walls: By late May, rural counties that had meatpacking plants with COVID-19 outbreaks had average infection rates five times higher than the rest of rural America. As of mid-July, at least 168 meatpacking workers had died from the disease.

“It’s a terrible experiment in achieving herd immunity,” says David Michaels, a professor of occupational health at George Washington University who led the the Occupational Safety and Health Administration (OSHA) under Obama. By the time the pandemic runs its course, he predicts, “everyone will have become infected” at meatpacking plants.

It didn’t have to be like this, and one federal agency had the power to do something to protect the nearly 200,000 people who slaughter and package America’s meat. OSHA, a division of the Department of Labor, is legally obligated to compel employers to provide workplaces “free from recognized hazards that are causing or are likely to cause death or serious physical harm.”

Decades ago, as a “management side” labor lawyer, Scalia led an industry-funded effort to limit OSHA’s efficacy.

Yet “OSHA is missing in action,” says Debbie Berkowitz, who worked at the agency during the Obama administration and now advocates workers’ rights at the National Employment Law Project. In early March, Berkowitz and labor advocates including the AFL-CIO urged OSHA to issue a temporary emergency requirement that employers keep their workers safe from the coronavirus. Instead, in late April the agency issued voluntary guidelines suggesting that plants tweak the alignment of workstations “if feasible” and “consider” making signs to urge workers to physically distance.

Presiding over this hands-off response is Labor Secretary Eugene Scalia, son of the late right-wing Supreme Court justice Antonin Scalia. But Scalia’s influence over OSHA extends beyond his Cabinet role. Decades ago, as a “management side” labor lawyer, he led an industry-funded effort to limit OSHA’s efficacy. Due to his efforts back then, the agency has “had a much harder time getting meatpacking plants to implement safe practices,” Berkowitz says—setting the stage for the COVID-19 meltdown.

During the 1990s, OSHA sought to better regulate grueling workplaces like meatpacking plants by devising rules to protect employees from common repetitive-stress injuries. The Ergonomics Program Standard targeted jobs that involved “repetition, awkward posture, force, vibration, and contact stress” and caused serious musculoskeletal pain or lasting symptoms. The proposal would require employers to establish an “ergonomics program,” with worker input, to tackle the issue. According to OSHA’s analysis, the standard would have prevented about 4.6 million repetitive-stress injuries over the following decade, resulting in a net annual savings of about $4.6 billion on health care and other costs. Berkowitz said the rules would likely have forced meatpackers to slow down their lines—which, when the coronavirus hit, would have allowed workers to spread out more and limit their close contact.

But powerful industry groups like the US Chamber of Commerce and the National Association of Manufacturers pushed back hard. In 1994, they created the National Coalition on Ergonomics, led by Scalia, which had a $600,000 war chest to lobby against the rules. Its effort found allies in the Republican-controlled House of Representatives, led by Speaker Newt Gingrich (R-Ga.), which proceeded to attach riders to budget bills preventing OSHA from rolling out the rules. Simultaneously, Scalia ramped up a scorched-earth PR effort against the plan, penning articles attacking ergonomics as “weird science,” “junk science,” “quackery,” and a “concession to union leaders.”

OSHA finalized the rules in November 2000, days after the hotly contested and inconclusive presidential election. But after the Gore v. Bush Supreme Court decision swung the presidency to Bush, the anti-ergonomics forces regrouped behind the Congressional Review Act—part of Gingrich’s Contract With America. The law allowed Congress to repeal executive-branch orders within 60 legislative days. The kicker: Once a rule has been repealed, the act prohibits the executive branch from reissuing it or a similarly worded rule—ever. The GOP-controlled Congress rushed to nix the ergonomics rule in March 2001.

Perhaps impressed with Scalia’s performance as an anti-­labor warrior, Bush appointed him as the Department of Labor’s top lawyer. During his stint as the labor solicitor, Scalia’s former law firm, Gibson, Dunn & Crutcher, lobbied the department to adopt a subtle change that would make life even tougher for meatpacking workers. Previously, the agency’s reporting forms required employers to list on-the-job injuries caused by “repeated trauma.” The new form, approved in 2003, instead directed employers to record any musculoskeletal injuries in the catchall category “All Other Occupational Illnesses.” (By then, Scalia had returned to private practice.) As a scathing 2005 Human Rights Watch report noted, the meat and poultry industry “exploited this change to falsely boast of improved safety results” as companies took advantage of not having to break out repeated-trauma injuries. And now that ergonomics standards were voluntary, meat companies “backslid on all the ergonomics work they had done,” Berkowitz says. The industry claimed steady drops in injury rates even as kill-line speeds rose.

There has never been a comprehensive study to determine how many people working in meat plants suffer from repetitive-stress injuries, but evidence of worker trauma abounds. Between 2012 and 2014, inspectors from the National Institute for Occupational Safety and Health made alarming findings inside two poultry plants seeking to speed up their lines: In both, more than a third of employees showed “evidence of carpal tunnel syndrome,” along with high rates of other musculoskeletal maladies. In 2016, investigators with the Government Accountability Office outlined concerns that “underreporting and inadequate data collection” of long-term injuries were hindering OSHA’s ability with ensuring workplace safety and health in meat and poultry plants.

For meatpacking workers today, the risk of repetitive stress injuries comes with the job. In early April, I spoke to Laura, a 40-year-old immigrant from Central America. She works at a Springdale, Arkansas, chicken-processing plant run by Tyson, the world’s second-biggest meat company. (She asked me not to use her real name to avoid reprisal from her employer.) After slashing chicken carcasses with a heavy knife for hours on end, her muscles ache when she gets off work, and her hands often tingle when she wakes up in the morning. Then there’s the constant smell of caustic chemicals like peracetic acid, which is used to sterilize chicken parts as they move down the line. “It’s awful. It makes your throat and chest hurt and gives you headaches,” Laura says. (OSHA has no standards on airborne exposure to these chemicals, even as their use in the poultry industry has rapidly increased.) Her workday had been rough well before the pandemic, but now she was terrified of bringing COVID-19 back from the plant to her husband and four kids.

Such fears have fallen on deaf ears in the Trump administration. In the face of the pandemic, Scalia’s Department of Labor has taken its industry-friendly stance a step further. In late April, Solicitor of Labor Kate O’Scannlain announced that if a worker sues a meatpacker for exposing her to the coronavirus, the department would consider taking the company’s side in court, as long as it had made “good faith attempts to comply” with OSHA’s voluntary guidance on COVID-19. In other words, just trying to follow voluntary safety standards is enough, even if workers get sick.

Scalia said he was following the guidance of the Founding Fathers.

At a June 15 speech before the conservative Heritage Foundation in Washington, DC, Scalia praised his department’s response to the pandemic. He insisted that its voluntary approach had proved to be the “best means to protect workers and give employers guidance and confidence in the steps to be taken to provide a safe workplace and satisfy their obligations.” By doing so, he continued, he was following the guidance of the Founding Fathers. “The genius of our Constitution,” he declared, “is the autonomy it allows the people, and the ways it checks and limits government so that private individuals and institutions may thrive.”

A few days later, Tyson announced 227 positive COVID-19 tests at its Springdale plant. When I caught up with Laura in early July, she told me she had avoided getting sick, but described a grim scene at her workplace: high absenteeism and spotty social distancing, while the line hummed along at its usual rate. She was still constantly worried about bringing the virus home. “I don’t feel safe there, but I’m not going to be able to easily find another job somewhere else right now,” she said. “And the truth is, I have to work.”