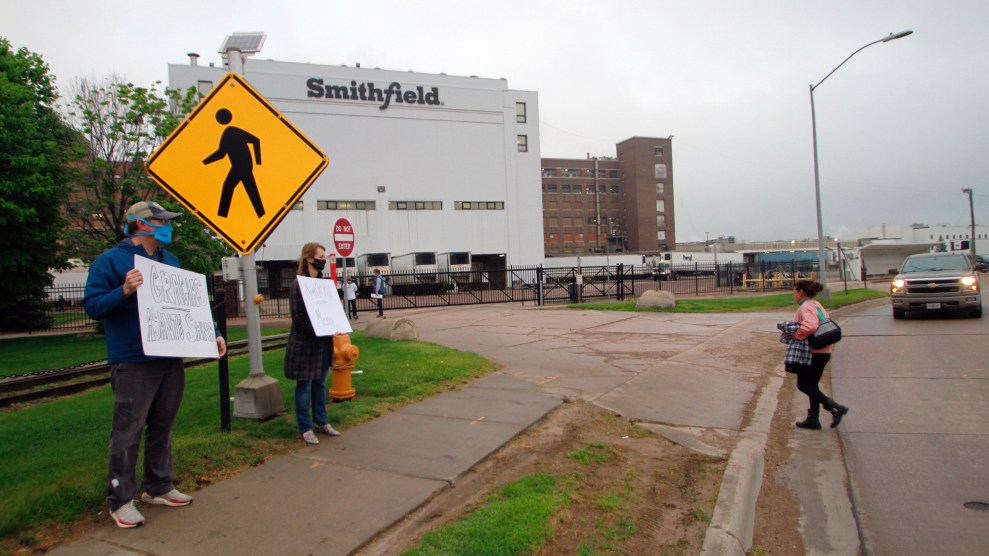 Sioux Falls residents cheered and held thank you signs to greet employees of a Smithfield pork processing plant as they begin their shift on Wednesday May 20, 2020 in Sioux Falls, South Dakota. Smithfield called many employees back to work after it closed the plant for more than three weeks because of a coronavirus outbreak. Stephen Groves/Associated Press

UPDATE (9-14-2020): Late Friday, the Occupational Safety and Health Administration announced a $15,615 fine against Brazil-based meatpacking giant JBS for “failing to protect employees from exposure to the coronavirus” at its Greeley, Colo., beef plant. An outbreak there led to 300 illnesses and six worker deaths. A May 1 Mother Jones investigation found that “all of the workers we interviewed said they had been hearing rumors about co-workers testing positive for the coronavirus for more than a month before it finally hit local news, but plant supervisors weren’t sharing that information.” A Denver Post investigation of internal company documents suggests JBS managers didn’t take protective-equipment and social-distancing guidelines seriously until late March, shortly before worker deaths began. As with Smithfield, JBS won’t feel much pain from the five-figure penalty—in 2019, JBS reported annual revenues of $51 billion and profits of $1.5 billion, both all-time highs for the company.

On Thursday, federal regulators announced they’re finally going to punish a meatpacker flouting the rules for protecting workers during the pandemic. But there’s a catch.

Since March the novel coronavirus has ripped through the meatpacking industry, sickening at least 42,123 workers and killing 201, according to the Food and Environment Reporting Network. The Occupational Safety and Health Administration has denied repeated calls to issue emergency safety standards in response to the pandemic, even for high-risk industries; and as the number of outbreaks in meatpacking planted approached 500, the agency declined to fine companies for failing to protect workers. As Debbie Berkowitz, who worked at the agency during the Obama administration and now advocates for workers’ rights at the National Employment Law Project, told me during the mid-summer peak of COVID cases in slaughterhouses, “OSHA is missing in action.”

Yesterday, OSHA showed up—sort of. The agency announced a $13,494 fine on pork giant Smithfield Foods, for “failing to protect employees from exposure to the coronavirus” at its massive Sioux Falls, South Dakota, plant. This is a tiny number compared to the damage done. “At least 1,294 Smithfield workers contracted coronavirus, and four employees died from the virus in the spring of 2020,” the agency’s press release states. When the coronavirus pandemic took root in March, Smithfield “did not develop or implement timely or effective measures” to prevent the spread of the virus, even as employees were “working in close proximity to each other and were exposed” to the pathogen, the citation alleges. (Back in April, the BBC’s Jessica Lussenhop published a wrenching piece on the Sioux Falls outbreak.)

The five-figure penalty will not materially affect the company’s bottom line. WH Group, Smithfield’s China-based parent company, posted annual sales of $24.1 billion in 2019, with an operating profit of more than $2 billion. According to the Bureau of Labor Statistics, meatpacking workers make a mean annual wage of $26,440. That means OSHA’s penalty will cost the company an amount equal to about half a line worker’s annual salary.

“It’s less than a slap on wrist,” said David Michaels, who served as OSHA’s administrator under President Barack Obama and is now a professor of occupational health at George Washington University.

While the OSHA press release claimed that its fine amounted to the “maximum allowed by law,” Michaels said that’s only technically true. For one thing, he said, the agency counted the plant’s COVID situation as one single violation, which it classified as “serious,” for which the maximum penalty is $13,494. But OSHA—which in its report listed four actions which it claimed Smithfield could have but didn’t take to prevent the outbreak—could have listed the violation as “willful,” which would have boosted the maximum fine to $134,940 (still a small penalty compared to the scale of worker injury from COVID, Michaels added). And it could have fined the company that amount for each of the four actions it didn’t take, which would have brought the total to around $2.7 million.

More importantly, OSHA could have issued what’s called an “emergency temporary standard,” forcing industries to take action to ensure workers can maintain social distancing, as more than 40 worker’s rights groups called for in early March. Instead, the Department of Labor, which houses OSHA, opted to roll out voluntary guidelines suggesting that plants tweak the alignment of workstations “if feasible” and “consider” making signs to urge workers to physically distance. (My recent piece on Department of Labor chief Eugene Scalia, son of the late Supreme Court Justice and a long-time “management-side” labor lawyer for corporate clients, details how he has guided a response where we simply look away from workers.)

“This is the Trump administration saying that these workers’ lives are worth less than pork shoulders,” Michaels said.

Michaels said that with an emergency temporary standard in place, OSHA could have really sent the meat industry a message about protecting workers from COVID by issuing a $13,494 for every worker sickened. At 1,294 cases in the Sioux Falls plant, that amount would have exceeded $17 million. Instead, “this is the Trump administration saying that these workers’ lives are worth less than pork shoulders,” Michaels said.

The former OSHA chief pointed to an action taken by California’s worker-safety agency as an example of effective enforcement. On September 9, the day before OSHA’s Smithfield action, the California Department of Industrial Relations smacked a mid-sized frozen-foods manufacturer, Overhill Farms, with a $200,000 fine and levied an equal one on the the temporary-employment agency it uses, Jobsource North America. Their infraction, according to the press release: they failed to take measures to protect workers from COVID, resulting in “more than 20 illnesses and, in the case of Overhill Farms, one death.” Overhill Farms has annual revenues of around $200 million—a tiny fraction of Smithfield’s. And its actions are alleged to have put far fewer workers at risk of getting sick.

For its part, Smithfield disputed OSHA’s assessment of its record protecting workers at the Sioux Falls plant. “This OSHA citation is wholly without merit and we plan to contest it,” Keira Lombardo, the company’s executive vice president of corporate affairs and compliance, wrote in an emailed statement. “We took extraordinary measures on our own initiative to keep our employees as healthy and safe as possible so that we could fulfill our obligation to the American people to maintain the food supply.”

The United Food and Commercial Workers International Union, which represents thousands of meatpacking workers, slammed OSHA’s Smithfield fine as too lenient. “How much is the health, safety, and life of an essential worker worth? Based on the actions of the Trump Administration, clearly not much,” UFCW International President Marc Perrone, wrote in a statement. “OSHA has been asleep at the switch throughout this pandemic and this is just the latest example of the agency failing to do their job and take responsibility for worker safety.”