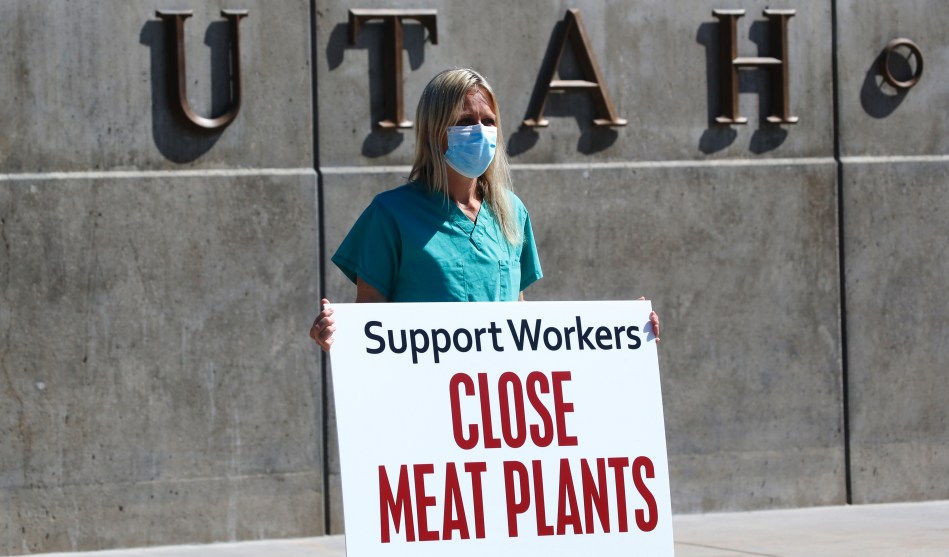 Dr. Niki Davis joins a protest in Salt Lake City on July 30, 2020, to lobby Gov. Gary Herbert to close meatpacking plants in the state. The protest was organized by members of the Washington-based Physicians Committee for Responsible Medicine, which contends meatpacking plants have contributed to too many coronavirus cases in Utah and across the US.Rick Bowmer/AP

This story was originally published by the Food and Environment Reporting Network (FERN).

While the Occupational Safety and Health Administration (OSHA) has been heavily criticized for its handling of workplace COVID-19 outbreaks, California and a handful of other states have implemented more rigorous workplace safety regulations that experts say better protect food and farm workers from the virus.

Labor and workplace safety experts say that federal OSHA’s enforcement should more closely resemble those states’ use of fines, stiffer regulations, and new legislation that boosts employers’ requirements to protect workers as the pandemic enters its eighth month.

“At the federal level, it’s seriously disappointing and dangerous the way the head of the Labor Department has been running OSHA,” says Mara Ortenburger, director of communications and research at Worksafe, a California-based organization that promotes safety rights in the workplace. “In contrast, in California, despite being understaffed, we are in much better shape.”

Federal OSHA has levied only small fines against a few employers in the agriculture sector, despite thousands of cases and hundreds of deaths among workers.

Federal OSHA has been criticized for months for investigating few worker complaints during the pandemic. The agency has levied only small fines against just a few employers in the agriculture sector, despite thousands of cases and hundreds of deaths among workers. According to the Food and Environment Reporting Network’s COVID-19 database, more than 1,400 food and farm facilities have had confirmed cases of COVID-19 and nearly 72,000 workers have contracted the virus. At least 327 have died.

In California, Ortenburger says, advocates and regulators have worked quickly to address a host of new questions employers have faced during the pandemic, especially those in sectors, like agriculture, that have seen a high number of outbreaks.

“If a worker at a plant gets sick from COVID, employers were asking, is that on us to report?” she says. “What if they got sick at home?”

In response, the state strengthened Cal/OSHA recording and reporting requirements, mandating that employers report all serious injuries, illnesses, or deaths occurring at work, according to the agency’s website.

California legislators also passed a law, set to go into effect Jan. 1, that will require employers to notify all workers of any potential workplace exposure to COVID-19. It would also allow Cal/OSHA to shut down a worksite that exposes workers to the disease, and issue citations for serious violations without advance notice. And it would require employers to notify local public health agencies of all workplace outbreaks.

Data from FERN’s map of California outbreaks shows a total of 3,825 confirmed cases on farms, 1,339 at meatpacking facilities, and 1,242 at food processing plants in the state.

Oregon OSHA has also taken tougher measures to penalize employers during the pandemic than its federal counterpart. It fined National Frozen Foods in Albany $2,000 for failing to implement physical distancing to protect workers from spreading the coronavirus, according to the agency’s site. It also published a draft mandatory workplace health rule on Oct. 23 that would clarify reporting requirements for employers.

Federal OSHA has taken comparatively little action in response to COVID-19 outbreaks at food and farm facilities. In September, the agency cited Smithfield Foods with a $13,494 proposed penalty for failing to protect employees at its Sioux Falls, South Dakota, plant from exposure to the coronavirus. Nearly 1,300 workers contracted the virus at that meatpacking plant in a spring outbreak, and four died.

Some states with the highest case counts among workers in the food and farm sector, including South Dakota, Colorado, and Florida, are under federal OSHA enforcement, meaning they are subject to the agency’s enforcement decisions.

Federal OSHA has also not heeded pleas from workers’ advocates and Democratic lawmakers for an emergency temporary workplace standard, which would create enforceable safety guidelines for employers during the pandemic. Some states, like Virginia and Michigan, have passed workplace standards that are stronger than the federal voluntary guidelines.

Mark Lauritsen, director of the food processing and meatpacking division of the United Food and Commercial Workers union, told FERN that he wanted to see federal action in the form of an enforceable emergency standard for meatpacking workers. “I don’t want guidelines,” he said. “I want standards. It has to be in every facility in the United States.”

Peter Dooley, safety and health senior project coordinator at the National Council for Occupational Safety and Health, a Massachusetts-based organization, said that federal OSHA’s lack of enforcement has put food workers at very high risk since the beginning of the pandemic. “The whole industry has really been very ill-prepared to protect workers,” he said.

Throughout the pandemic, workers in food and farm settings have reported unsafe working conditions, including limited access to personal protective equipment, inability to obtain paid time off, and lack of access to testing. Federal OSHA has completed few inspections in response to worker complaints.

“The whole industry has really been very ill-prepared to protect workers.”

That lack of information could itself make workplaces more dangerous, experts say. Researcher Matthew S. Johnson, an assistant professor at Duke’s Sanford School of Public Policy, published a study on June 18 demonstrating a 73 percent improvement in compliance by other facilities after company names are revealed in OSHA press releases.