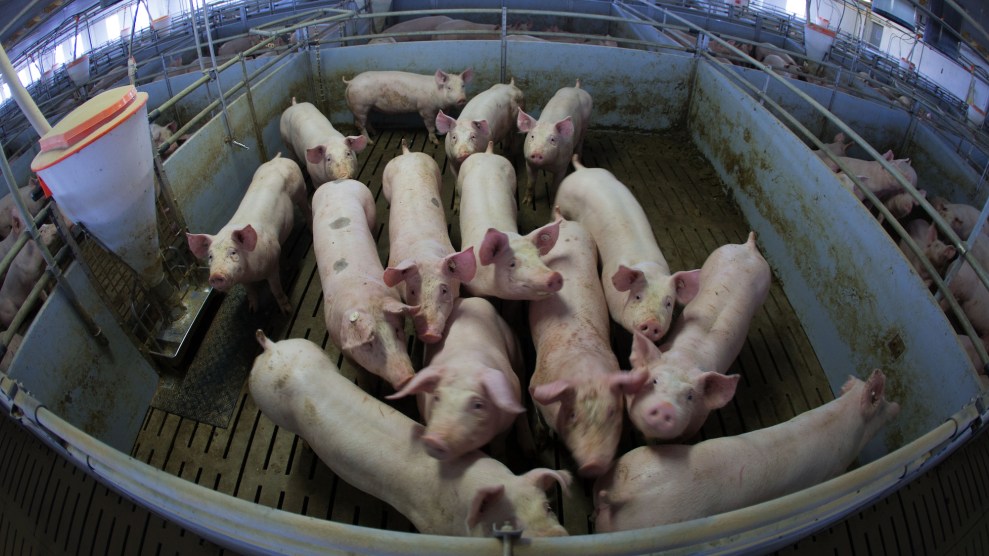 On July 13, for the second time in less than two years, Sen. Cory Booker (D.-N.J.) floated a bill that challenges the business model of a powerful, corporate-dominated industry: meat.

When Booker first proposed the Farm System Reform Act in December 2019, the Republican Party owned the White House and both chambers of Congress. The GOP draws the great bulk of the meat sector’s campaign contributions and its members have been known to embrace unchecked carnivory as a culture war issue. So it wasn’t a huge surprise that the bill gained no traction.

But things have since changed.

Now the Democrats control the executive and legislative branches, Senate dysfunction notwithstanding, and have shown an increasing appetite to rein in the corporations that wield monopoly-like power. Last week, President Joe Biden signed an executive order that would do just that, specifically name-checking the meat industry as a target. “Four large meat-packing companies dominate over 80% of the beef market and, over the last five years, farmers’ share of the price of beef has dropped by more than a quarter—from 51.5% to 37.3%—while the price of beef has risen,” the order’s fact sheet complained.

“Four large meat-packing companies dominate over 80% of the beef market.”

Meanwhile, the coronavirus pandemic displayed both the industry’s disregard for worker safety and its massive concentration: In April 2020, a COVID outbreak at a single Iowa hog-slaughter facility run by Tyson temporarily shuttered 4 percent of US pork capacity, causing supply disruptions.

The Booker bill would shake the foundations of the handful of companies that slaughter and pack the bulk of the meat that supplies supermarkets, restaurants, and fast-food outlets. Their supply of animals comes from factory-scale facilities known as CAFOs (concentrated animal feeding operations), which concentrate vast amounts of manure that generate the potent greenhouse gases methane and nitrous oxide and often pollute water and foul air for surrounding communities. The Farm System Reform Act would place an immediate moratorium on new large-scale CAFOs, and halt the expansion of existing CAFOs over a certain size. And it would fund a voluntary buyout program for CAFO owners who want to exit the business.

Such a moratorium would throw a wrench into an industry geared to perpetual expansion, its profit prospects reliant on satisfying ever-growing demand for US meat exports in Asia. And it would aid communities in livestock-heavy regions—Wisconsin, Iowa, North Carolina, Delaware/Maryland—that are rebelling against having to live among huge cesspools of manure known as lagoons. The press release for Booker’s bill spells out why:

According to the Center for Disease Control and Prevention, large CAFOs produce as much as 1.4 billion tons of waste each year and are not required to maintain a treatment facility for livestock waste. The number of CAFOs have dramatically increased over the years and the steady growth makes rural communities vulnerable to environmental hazards and threaten the economic prosperity of family farms. The overuse of medically important antibiotics by large CAFOs has led to the generation and spread of dangerous antibiotic resistant bacteria. In 2019, the American Public Health Association urged federal, state, and local governments and public health agencies to impose a moratorium on all new and expanding CAFOs,and a 2021 study published in Proceedings of the National Academy of Sciences (PNAS) found that air pollution due to animal agriculture is responsible for 12,720 US deaths per year.

In addition to helping communities resist the expansion of a dirty industry, the bill would also help meat farmers escape an unfair contract system that strands them on a debt treadmill at the whims of the dominant meatpackers, who have minted profits by dictating terms to a compliant, cowed group of farmer-suppliers. It proposes a buyout fund for farmers who want to stop running a CAFO—and, say, switch to a pasture-based system.

In 2021, a bill that would improve public health health but that undermines the business model of a potent industry remains a longshot. But the Farm System Reform Act has high-profile friends in the Senate (co-sponsors include Bernie Sanders and Elizabeth Warren, both now power players) and in the House (California Rep. Ro Khanna rolled out a companion version). And now there’s a president who says he wants to take on the power of the meat companies. If Biden’s serious, one way to show it would be to put some political muscle behind Booker’s bill.