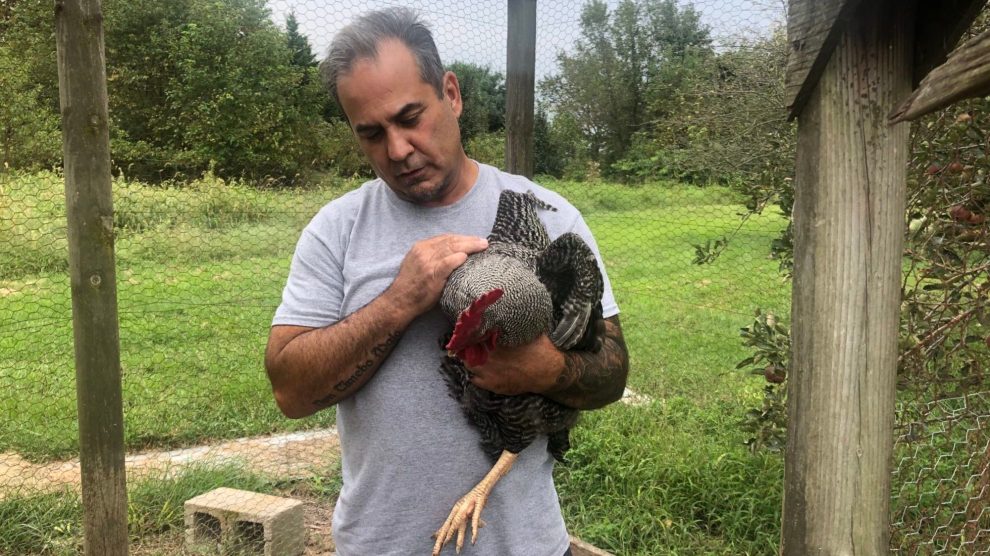 Wayne Morra raises his own chickens in his backyard, but is fighting the stench caused by neighboring industrial poultry operations.Leanna First-Arai

When Wayne Morra bought six acres of land hedged by rolling cornfields in 1999, he was looking for some peace. A single father and a nursing instructor at Delaware Technical Community College, Morra considered his new home, in the tiny town of Greenwood, Delaware, a refuge from the bustle and pollution of Pittsburgh, his hometown.

But in 2015, when the farmland directly behind his property went up for sale, Morra’s idyll came to an end.

A farmer built three long green barns just 500 feet from Morra’s house, which he now packs with approximately 90,000 chickens at a time. When the birds reach market weight, their owner, the poultry giant Amick Farms, collects them for slaughter.

But there are always premature deaths. The farmer tosses those carcasses in outdoor piles, which attract foxes and buzzards. And he pumps his barns’ ammonia-tainted exhaust, through massive ventilation fans, into the surrounding neighborhood. Many days, Morra can’t walk from his house to his car without being swarmed by flies. He runs, gagging from the stench of rotting birds.

Soon after the chicken houses opened, Morra’s daughter, then in high school, was diagnosed with reactive airway disease—a lung condition caused by numerous irritants, including ammonia.

Greenwood lies in Sussex County, the top chicken-cultivating county in the United States. Here on the Delmarva Peninsula—which stretches down the eastern side of the Chesapeake Bay through Delaware, Maryland, and a small portion of Virginia—plants owned by Amick Farms, Mountaire Farms, and Perdue, among other corporations, process more than 600 million broilers a year.

But in addition to producing 4 billion pounds of what the industry touts as the healthiest, most affordable, and climate-friendly meat, Delmarva also annually generates hundreds of thousands of tons of chicken waste, including manure, feathers, bones, and processing sludge. These dregs—which contain high levels of nitrogen and phosphorus—are often over-applied to farm fields that run off into local waterways, including the Chesapeake Bay, where these nutrients contribute to low-oxygen conditions that kill fish and crabs.

Some environmentalists worry that anaerobic digesters will merely enable Big Chicken to further expand across poultry-producing regions of the nation.

Now, a solution modeled by dairy and swine operations may be in the offing as biogas companies vie to build anaerobic digesters on Delmarva. Inside these heated tanks, hungry microbes will consume poultry waste and emit a mix of gases rich in methane. This biogas will be scrubbed to remove impurities like hydrogen sulfide and ammonia. Rebranded by the industry as “renewable natural gas,” it will then be sold to energy companies including Chesapeake Utilities and British Petroleum, which will burn the methane to generate heat and electricity, or compress it and sell it as truck fuel.

After producing usable methane, said Stephanie Lansing, who leads the Bioenergy and Bioprocessing Technology Lab at the University of Maryland, anaerobic digesters are left with nutrient-rich solids and liquids. Called digestate, this material can be sold as fertilizer in nutrient-poor regions of the country, displacing the use of synthetic fertilizer, which is energy intensive to produce. “It’s kind of a double bang for your buck,” Lansing said.

It sounds like a great deal: create a soil amendment, slash water pollution, and reduce fossil-fuel emissions. But some environmentalists and neighbors of production barns worry that anaerobic digesters will merely enable Big Chicken to further expand across poultry-producing regions of the nation. Public and private investment in biogas plants, say groups like the Socially Responsible Agriculture Project, will entrench some of the industry’s most egregious practices, including reliance on barns like those in Morra’s backyard. And they’ll do nothing to address the overcrowding and disease that routinely kill birds, whose carcasses and manure contaminate the environment and threaten human health.

Anaerobic digesters have long been used, globally, at farms and wastewater treatment plants to capture methane that is burned to power on-site operations. But the biogas industry’s expansion across Delmarva comes as the gas is in the crosshairs of climate concerns.

Methane is far more potent than carbon dioxide at trapping the Earth’s heat, which is why 34 nations this past September committed to cutting methane emissions at least 30 percent from 2020 levels by 2030.

But the Biden Administration’s corresponding methane reduction plan doesn’t require agriculture to slash its methane emissions. (Ag accounts for 36 percent of the nation’s methane emissions; the oil and gas industry accounts for the next highest share, at 30 percent.) The plan merely incentivizes voluntary adoption of climate-smart practices, including the construction of anaerobic digesters.

Developers of these plants already make money selling clean-energy credits through federal and state programs. They’re also eligible for millions in loans and grants. In 2021, the USDA allocated $123 million to support anaerobic digestion projects, and it plans to increase that spending in 2022. Many developers are also receiving funds from state and county coffers.

Annapolis-based Bioenergy DevCo was the first company to propose an industrial-scale poultry digester—to be called the Bioenergy Innovation Center—on Delmarva, and it is currently awaiting state permits to build a facility 13 miles from Morra’s home. According to its developers, the plant will annually process up to 210,000 tons of chicken waste—most of it liquified—and produce enough gas to power roughly 2,700 homes.

Another company, CleanBay Renewables, has announced plans to build its first two digesters—out of 30 slated for the United States—on Delmarva. Nationally, renewable natural gas production doubled between 2017 and 2020, and the number of farm-based anaerobic digesters increased from approximately 275 in 2020 to 350 in 2021, according to the American Biogas Council.

Anaerobic digesters seem to offer unalloyed climate benefits. According to the Environmental Protection Agency (EPA), capturing methane from agricultural operations in the United States reduced direct emissions equivalent to those produced by nearly 1 million cars in 2020.

Dozens of civic, religious, and environmental groups on Delmarva are actively opposing the plants for health and safety reasons. That’s because biogas systems are not perfectly airtight. From production through end use, they can leak up to 15 percent of the gas they produce, according to an article by Emily Grubert, a professor of engineering at the Georgia Institute of Technology, published in Environmental Research Letters. Under reasonable leakage assumptions, Gruber writes, renewable natural gas could be more climate intensive than fossil natural gas, particularly if a wave of facility buildouts encourages “intentional” waste production.

Environmental justice scholars and activists are also skeptical, said Sacoby Wilson, a professor of environmental health at the University of Maryland who serves on the EPA’s Environmental Justice Advisory Council. “There’s no guarantee that this methane capture is going to reduce co-pollutants,” which disproportionately impact low-income, rural, Black, and migrant communities, he said.

Biogas systems can leak up to 15 percent of the gas they produce.

One of those pollutants is ammonia, which is generated all along the poultry supply chain and isn’t even regulated by Delaware. Long-term exposure to the gas has been linked with decreased lung function and respiratory effects, according to Keeve Nachman, director of the food production and public health program at Johns Hopkins University. Research also shows that living near large-scale poultry operations is linked to increased risks of pneumonia and infectious diarrhea.

And according to data provided by co-authors of a May 2021 study, published by the National Academy of Sciences, 1,178 people die prematurely in the United States each year from breathing fine particulate matter linked specifically with poultry operations. Sixteen of those deaths occur annually in Sussex County.

“Then we wouldn’t have the need for methane capture,” Wilson said.

Some environmental groups, however, do support the digesters. Employing over 17,000 people, the poultry industry is the cornerstone of Delmarva’s economy, said Judith Stribling, a retired professor of environmental science at Salisbury University and the former president of the advocacy group Friends of the Nanticoke River, which is committed to helping the industry clean up its act.

Stribling is so convinced that anaerobic digestion can curb discharges into the watershed that she supports the expansion of a natural gas pipeline that will speed the replacement of some fossil fuel gas with biogas.

Bioenergy’s partner, Chesapeake Utilities, did not respond to questions about how far the gas would be transported, how much new gas infrastructure will be built to hook into the grid, or the amount of fossil fuel gas the biogas will replace—information essential to assessing whether a project delivers net climate benefits.

Wayne Morra, in Sussex County, would support any initiative, including digesters, that stanched the stench in his yard. But he isn’t convinced the Bioenergy Innovation Center, or industrial-scale anaerobic digesters more broadly, will do anything to improve his or his neighbors’ “hell”—those festering mounds of dead birds and manure.

He worries that if something went wrong with the digesters, residents wouldn’t have anyone to turn to. His concern is based on experience. In 2017, as his daughter’s breathing worsened, Morra and his neighbors repeatedly called their local representatives, hoping to prompt legislation that would protect residents from airborne pollutants.

But no one from the statehouse ever called Morra back. He wasn’t surprised: State Senator Brian Pettyjohn worked as a telecommunications manager for poultry company Mountaire, and State Senator Gerald Hocker helped roll back stormwater management rules in favor of poultry producers.

Both senators have been vocal about their support for anaerobic digesters. In a letter they co-signed with three other state senators in support of a county permit for the Bioenergy Innovation Center, the legislators noted that they were “pleased to hear” that the company had entered into a long-term relationship with Perdue and Chesapeake Utilities.

None of those senators responded to FERN’s repeated interview requests.

As the anaerobic-digester rollout continues on Delmarva, Morra feels “terrible,” he said, about his tax dollars supporting projects that are poised to enrich poultry giants but fail to relieve the environmental and health burdens of those who live near chicken barns.

“It’s like paying for my own problems,” he said with a sigh. “It’s ridiculous.”