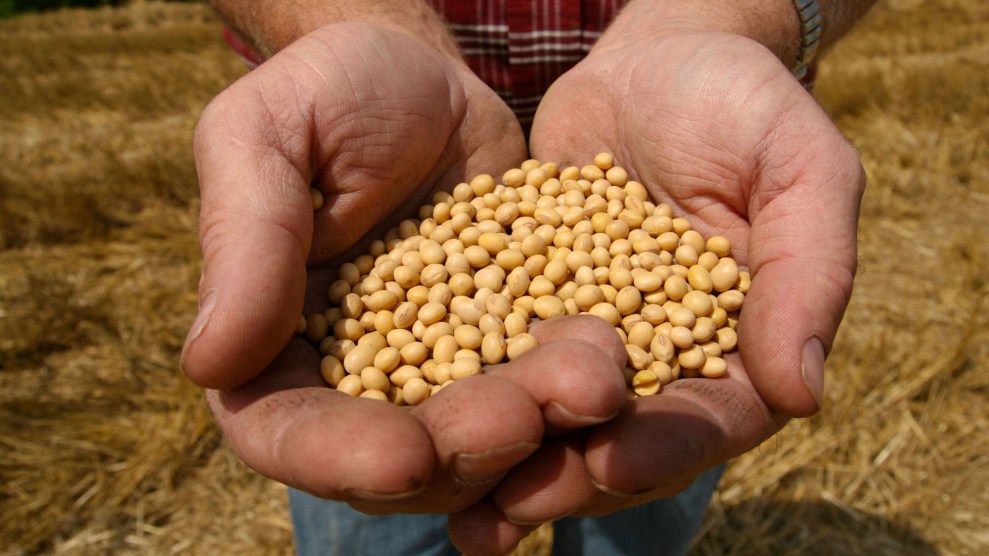 Once the lion of US agriculture, Monsanto skulked off the historical stage and into the maw of its long-time rival Bayer, the sprawling German conglomerate, in 2018. The takeover marked a quiet exit for one of the 21st century’s most controversial corporations—one that became embroiled in scandals involving undisclosed grants to and collaboration with prominent university professors *, triggered an annual global “March against Monsanto” in the 2010s, and generated two massive sets of lawsuits regarding its blockbuster herbicides, glyphosate and dicamba.

The brand and most of the media frenzy around Monsanto have evaporated, but the products that made the company worth $66 billion at the time of its sale linger. Glyphosate, whether carcinogenic or not—the question remains fiercely debated—turns up in rain and streams near farm fields, in grain–based food products like cereal and pasta, and probably in your body. In 2021, farmer complaints about off-target damage from dicamba raged through farm country for the sixth straight year. Seeds genetically altered by the company’s technicians to withstand those chemicals still proliferate in fields, in three crops that collectively cover more than half of US farmland, corn, soybeans, and cotton. These commodities form the material basis of our food supply: the feed for meat animals, and the sweeteners, fats, and thickeners that make processed foods so irresistible.

What was Monsanto—how did it claw its way to such a central place in the food system, and what does its continued existence as an appendage of a German multinational corporation mean for our sustenance and the natural resources it relies on?

In his new book Seed Money: Monsanto’s Past and Our Food Future, Bartow J. Elmore has delivered the definitive historical account of a firm with a momentous history and an afterlife that makes it as relevant as ever. An environmental and business historian at Ohio State University, Elmore wrote Seed Money for a non-academic audience—in clear, brisk prose, with an eye for the telling anecdote.

The story starts in the early 20th century, when a drug salesman named John Queeny dreamt of launching a US firm that could break the dominance of German giants like (ironically) Bayer in the budding field of synthetic organic chemistry, which involved synthesizing old and inventing new compounds with fossil carbon sources like coal and petroleum. Queeny’s St. Louis-based startup, named for his wife, Olga Mendez Monsanto, a descendent of European aristocrats, found a lucrative business line selling saccharin and caffeine to Coca-Cola. It soon shifted to industrial chemicals.

The year 1997 marks the pivotal moment in Elmore’s tale. At that point, Monsanto was a conglomerate with legacy industrial-chemical business lines that had generated billions of dollars in profits over the decades, but were then mired in lawsuits over toxicity claims; and a fast-emerging line selling patented genetically altered seeds. The company’s executives cannily decided to bundle the troublesome divisions into a new firm called Solutia, spinning it out as an independent company whose assets included facilities used to make polychlorinated biphenyls (PCBs), the highly toxic, environmentally persistent industrial chemicals; and Agent Orange, the grizzly defoliant used by the US military at a vast scale—and great profit to Monsanto—during the Vietnam War. Monsanto “saddled the spinoff with $1 billion in debt and major environmental liabilities,” Elmore reports. Then its executives pitched the remnant as a reborn company based on “Food, Faith, Hope”—which became an instant stock-market darling.

To the very end, the company and its boosters would cling to the distinction between “old” Monsanto, which ruthlessly profited by synthesizing highly poisonous compounds from fossil resources like coal and petroleum, and the “new” one, a virtuous player that used cutting-edge biotechnology to develop the tools necessary to “feed the world.”

From the start, the line between the two was murky. One old-line asset the firm did not palm off on Solutia was its blockbuster glyphosate herbicide. Developed in 1970 by a Monsanto scientist, glyphosate promised a miracle cure to farmers’ weed problems because it killed pretty much all vegetation with seemingly low toxicity to humans. (It works by jamming up plants’ ability to produce an enzyme necessary for making vital amino acids, the building blocks of protein. That’s a strategy for nourishment that plants share with fungi and bacteria, but not insects, birds, fish, or mammals, all of which simply consume protein.)

With the creation of Roundup, Monsanto exited the detergent business and shunted the output of its Idaho mines into the new herbicide.

Branded “Roundup,” for its ability to clean all the weeds from a field, the chemical hit the market in 1974 and became an instant sensation in farm country. Then and now, Roundup production relies on a division deeply rooted in Monsanto’s past as an industrial chemicals titan: its phosphorus-mining operations, first in Florida and Tennessee, and later in Idaho. In these regions, “millions of years ago, aquatic creatures once roamed inland seas,” Elmore writes. “Now, these phosphorous-rich bones would seed a new chemical industry.” Monsanto had turned these deposits into a blockbuster business line by selling phosphate-laced detergents, which by the 1960s had come under attack for polluting waterways, because phosphorus feeds algae blooms. With the creation of Roundup—which relies on phosphate as a key ingredient—Monsanto exited the detergent business and shunted the output of its Idaho mines into the new herbicide.

In the early 1980s, with legal liabilities from its PCB and Agent Orange operations mounting, petroleum prices skyrocketing, and oil firms big-footing their way into the chemical trade, Monsanto execs decided it was time for a change. That’s when the firm made its foray into the emerging field of seed biotechnology, in search of product lines that were “less dependent on raw material costs” and had a “strong proprietary character,” Elmore reports, quoting a company honcho in 1982.

The new division’s great goal was to engineer crops that could withstand Roundup, which would allow farmers to spray the chemical on their fields throughout the growing season. The Roundup Ready line of seeds—developed from genes found in bacteria outside of Monsanto’s Louisiana glyphosate factory—took the US farm country by storm starting in the mid-1990s, proliferating in three pervasive crops—corn, soybeans, and cotton. This caused Roundup sales to spike, and opened a new, highly profitable revenue stream: premium-priced, patent-protected seeds. The triumph pushed the new Monsanto into the stratosphere, with a dominant position in the seed trade and a thriving herbicide division to boot.

Walter Shapiro, the CEO who guided the company through the Solutia spinoff and into its biotech future, positioned the company as an information-technology player, a kind of corn-field Microsoft. He promised to a confab of environmental journalists in 1995 that Roundup Ready tech would enable farmers to reduce herbicide use, because Monsanto’s product would sort our their weed problems. “Putting information in the gene of a plant,” he declared, would stifle the cascade of chemicals unleashed by the post World War II rise of industrial agriculture, and lead to a new era of high-tech, low-impact farming.

By 2008, the company had risen to a position of supremacy over US farm fields, its soybean, corn, and cotton traits having gained near-monopoly status and Roundup sales booming. Responding to real and imagined concerns about the triumph of genetically modified crops, as well as mounting evidence that climate change would imperil global food production, Monsanto positioned itself as the corporation with the key to feeding humanity and staving off global hunger. The company issued a press release promising to “double yield in its three core crops of corn, soybeans and cotton by 2030, compared to a base year of 2000,” while also reducing by one-third the amount of water and fertilizer required to grow them.

“The ‘new’ Monsanto was not actually all that new.”

But as Elmore amply demonstrates, “the ‘new’ Monsanto was not actually all that new.” Its fate remained tethered to the production of a chemical based on fossil resources—mined phosphate—buried deep underground; and on the ability of that chemical to be copiously sprayed across vast swaths of the landscape, with the hope it wouldn’t cause harm.

Seed Money documents in devastating detail the consequences of that triumph: the highly predictable (but denied for years by Monsanto) rise of weeds that evolved to resist Roundup; credible suspicions that Roundup is more toxic than the company originally let on; the deluge of older, even more toxic herbicides deployed in a futile attempt to control those superweeds; and a festering legal dispute over the company’s phosphate mines in Idaho, which have “contaminated soil and groundwater with hazardous chemicals and radioactive constituents,” as the US Environmental Protection Agency has found.

As for that 2008 promise its wonder seeds would double yields while cutting fertilizer and water use by 2030? The company never came close. A 2020 Purdue University assessment found “little to no evidence” that GMO traits have done anything to boost yields since their introduction in the mid-1990s. Indeed, the “new” Monsanto exited the stage in much the same shape as the “old” one: facing billions of dollars of legal liabilities for its products, which are now Bayer’s problem.

Seed Money brims with startling details about Monsanto. But here’s the most eye-popping of all: The company that knowingly marketing PCBs, long after evidence mounted of their harms, didn’t really change its stripes when it metamorphosed into an agribusiness titan with ambitions of feeding the world with its products.

The company’s PCB and Agent Orange operations have been shuttered for decades (though the human ravages they caused linger), but its agribusiness operations, including those Roundup-supplying phosphate mines in Idaho, continue as usual—meaning the firm still relies on dirty fossil resources.

And Monsanto knew that its latest troublesome herbicide, a version of dicamba specially formulated for use on its patented soybean and cotton crops, would likely drift off-target, internal documents show. (According to reporting by the Midwest Center for Investigative Reporting, Monsanto and Bayer insist that “when applied according to the label, dicamba stays on target and is an effective tool for farmers.”) Bayer continues to aggressively market the chemical, even as drift damage continues. And it is now vowing to deliver soybeans engineered to withstand no fewer than five herbicides, including both dicamba and Roundup.

Elmore’s book provides the last word we need on Monsanto’s past. But the story of its impact on US farm fields, and the communities near them, is far from over.

Clarification: This article originally described a 2015 New York Times investigation of Monsanto’s interventions into academia as a depiction of a“pay-for-research scandal.” The text has been amended to reflect that the controversy involved undisclosed grants to prominent professors to promote GMOs and to lobby the US Environmental Protection Agency.