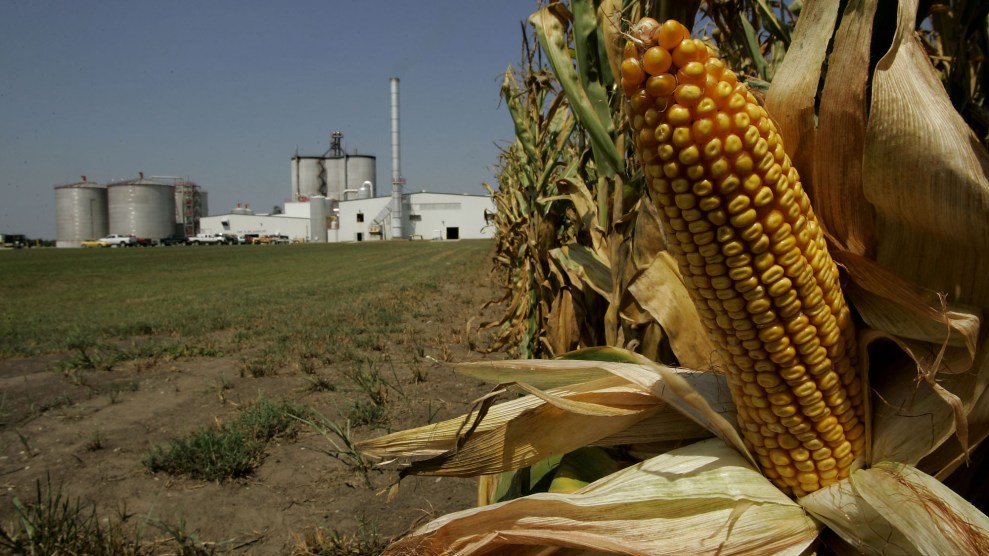 An ethanol facility at the edge of a corn field.Charlie Riedel/AP Photo

To reduce greenhouse gas emissions from the nation’s agribusinesses and farms, US Department of Agriculture Secretary Tom Vilsack favors a “market-oriented, incentive-based, voluntary” approach—one that wields the carrot of government largess, not the stick of regulation. In November, his son, veteran corporate lawyer Jess Vilsack, took a job with an Iowa outfit that could cash in from such a suite of policies.

The company, Summit Agricultural Group, has recently launched a private equity arm with a bold and controversial plan to build a $4.5 billion, 2,000-mile pipeline to capture carbon dioxide emitted by 31 corn ethanol plants in the Midwest and bury it underground in North Dakota.

The pipeline will rely on ethanol-friendly policies and subsidies that Jess’s father has been advocating for his entire political career.

Jess Vilsack now serves as the general counsel of the venture, which is called Summit Carbon Solutions. Its planned pipeline, dubbed the “Midwest Carbon Express,” would count as the “world’s largest carbon capture and storage project when complete,” the company’s website states. So far, the project has drawn investment from venture capital firm Tiger Infrastructure Partners and farm-equipment giant John Deere, Bloomberg Law reports. It will rely on ethanol-friendly policies that Jess’s father has been advocating for his entire political career, from his stint as Iowa governor in the 2000s through his terms as agriculture secretary under Presidents Barack Obama and Joe Biden.

Summit is a sprawling conglomerate that raises beef cattle, consults with meatpacking companies on building and managing large hog-confinement facilities, and owns more than 50,000 acres of Midwestern farmland. Its also has investments in Brazil’s corn-based ethanol industry. In the 2000s, Summit launched and sold major operations directly producing hogs and ethanol in Iowa.

Its founder and CEO, Bruce Rastetter, is a heavyweight in Iowa politics, dubbed by Politico in 2015 as the “real Iowa kingmaker” for his generous campaign contributions and close ties to top Republican politicians, including Iowa Gov. Kim Reynolds and US Sen. Joni Ernst. In 2016, Rastetter served on then-candidate Donald Trump’s Agricultural and Rural Advisory Committee and landed on the president-elect’s short list to be appointed secretary of agriculture. His donations didn’t always flow exclusively to Republican stalwarts. Tom Vilsack served as governor of Iowa for two terms from 1998 to 2007, and Rastetter gifted $15,250 to his campaigns during that period.

Summit Carbon Solutions’ business model relies heavily on federal farm and energy policies that are friendly to big agribusiness. Corn-based ethanol is propped up by billions of dollars in annual crop subsidies—administered by the USDA—and by the Renewable Fuel Standard, a federal law that requires the gasoline industry to use 15 billion gallons of ethanol annually. The RFS as currently structured lapses in 2022; Biden’s Environmental Protection agency has statutory authority to set ethanol-use requirements in the years after.

And Summit’s business model appears to depend on the kind of government incentives that the Biden administration in general, and Tom Vilsack in particular, have been pushing to address climate change. The biggest one is the federal tax credit for carbon sequestration, known an Section 45Q, which offers companies a tax break of $50 per ton of metric carbon stored for projects that launch before 2026. The break can be utilized for up to 12 years.

Summit claims its Midwest Carbon Express will be able to store as much as 12 million metric tons of CO2 annually. At that level, the company can expect up to $600 million in annual credits from 45Q alone—or $7.2 billion over 12 years. That amounts to more than the $4.5 billion investment it will take to build out the project—meaning that 45Q alone could potentially deliver enough to pay off the upfront expense of building out the pipeline. Summit execs are not shy about how much the Midwest Carbon Express relies on 45Q for profitability. “The $50 a ton really covers the majority of that capital expenditure,” Jim Pirolli, chief commercial officer for Summit Carbon Solutions, said at the American Coalition for Ethanol’s annual meeting last August, the farm trade journal DTN reported.

The 45Q provision didn’t originate with Biden; it started with 2008 legislation designed to spur carbon capture in the coal industry, an effort that fizzled. But the Build Back Better Bill, the signature Biden social- and climate-policy legislation that passed the US House last year and is now stuck in the gridlocked Senate, would boost the tax break from $50 to $85 per ton—which would bring Summit Carbon Solution’s potential annual 45Q haul from $600 million to over $1 billion.

Tom Vilsack’s USDA has already demonstrated enthusiasm for ethanol-related carbon-storage ventures. In September 2021, the department announced a $464 million program to “build or improve renewable energy infrastructure” in rural areas. The press release highlighted a $25 million loan to “build a carbon-capture processing and storage facility” at an ethanol plant in North Dakota run by a company called Red Trail Energy (not affiliated with Summit.)

Jess Vilsack’s employment could potentially obligate Tom Vilsack to recuse himself from decisions that directly affect the pipeline project. According to the USDA Office of Ethics, the department’s employees “shouldn’t participate in particular matters” that are “likely to affect the financial interests” of close family members. “Secretary Vilsack fully understands his requirements under the Federal ethics rules,” USDA spokeswoman Kate Waters wrote in an email. “He has and will continue to adhere to those requirements.” Jess Vilsack did not respond to attempts to contact him.

Hundreds of landowners in an intensely farmed region will either have to cooperate or face the prospect of being forced to cede land under eminent domain.

Meanwhile, the Summit Carbon Solutions project is generating significant controversy on the ground, in farm and environmental circles in the Midwest. To push through its 2,000 mile pipeline, which cuts through Iowa, Nebraska, Minnesota, North Dakota, and South Dakota (map here), hundreds of landowners in an intensely farmed region will either have to cooperate or face the prospect of being forced to cede land under eminent domain. Dozens of landowners along the route are “refusing to cede their property to the project,” Reuters’ Leah Douglas reported in November.

If the farmers hold out, Summit could be well-positioned, at least in Iowa, to prevail through eminent domain. The Iowa Utilities Board, appointed by the state’s governor, decides who can wield that power in the state. All three of the board’s members were chosen for that role by close allies of Summit CEO Rastetter. Gov. Kim Reynolds, a major recipient of Rastetter’s campaign donations, appointed one of them. Former Governor Terry Branstad, who served as President Trump’s ambassador to China, tapped the other two. Rastetter and Branstad form a kind of mutual-admiration society; I teased out their relationship here. Branstad serves as Summit Carbon Solution’s “senior policy adviser” and has been hotly promoting the pipeline project—meaning Jess Vilsack isn’t the only politically connected Iowan on Rastetter’s payroll.

Some environmental groups, including Sierra Club and Food and Water Watch, oppose the pipeline. The main reason is that it would further entrench the production of corn-based ethanol, which consumes more than a third of the US corn crop and doesn’t deliver any climate benefits. Corn ethanol helps prop up a ruinous corn-soybean duopoly on the Midwest landscape that is destroying one of the globe’s greatest stores of topsoil. The enviro groups also worry that the CO2 gathered by Summit could ultimately be used by North Dakota’s vast fracking industry for what’s called enhanced oil recovery—that is, injected into nearly spent wells to get the last crude out. Summit insists its CO2 won’t be used for that purpose.

By going to work for an agribusiness outfit, Jess Vilsack isn’t exactly defying family tradition. After serving two terms as agriculture secretary for President Barack Obama, Tom Vilsack took a position as a dairy-industry executive, which he kept until returning to the USDA under Biden. But it’s not a great look for Jess Vilsack to be working for a firm whose business model leans on federal policy for profitability, at a time when his father is deeply involved in making it.