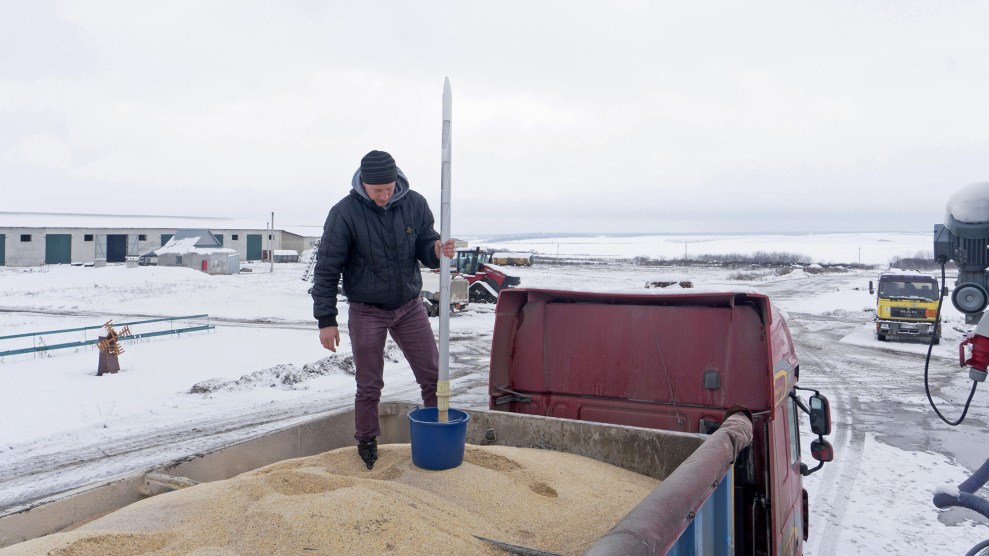 A farm worker collects a sample of wheat ahead of storage on farmland near Ternopil, Ukraine, in 2017. Vincent Mundy/Bloomberg/Getty

“Ukraine has what may be the richest soil in the world,” writes University of Georgia historian Scott Reynolds Nelson in his astonishing new book Oceans of Grain: How American Wheat Remade the World. “In 1768, Tzarina Catherine II sent a hundred thousand Russian troops through this region and across the Black Sea to capture it.” Her goal: to establish a Russian Empire by “seizing the steppe, planting wheat here, and then feeding all of Europe.”

It wasn’t just the fertile land that made Ukraine such a prize. Nelson writes evocatively of the “black paths” (chorni shlyakhy in Ukrainian), the “ancient oxen trails that cut across Ukrainian plains to Black Sea ports,” where grain could be gathered on ships and sent to the Mediterranean, the gateway to the lucrative European wheat market.

Two and a half centuries later, Russian soldiers have once again besieged Ukraine, and another Russian ruler dreams of an empire with easy access to the Black Sea and Europe. Russia’s latest assault on its western neighbor has plunged global food markets into a state of chaos, with prices gyrating upward.

Wheat prices have already shot up to their highest level in 60 years.

Today, Russia is a global wheat powerhouse, the world’s number-three producer of the staple crop, and its number-one exporter. Just as in 1768, much of its most productive farmland lies east of the Ukraine border, making it largely reliant on the same “black paths” (now covered in paved roads and railroad tracks) to reach markets. Ukraine, too, is a major wheat exporter, and has recently emerged as a corn powerhouse, too, supplying China and its booming meat industry with nearly a third of its feed corn imports.

What does it mean when a war of conquest descends upon one of the globe’s great breadbaskets in the 21st century? With trade routes embattled and markets roiled by Russia’s invasion, wheat prices have already shot up to their highest level in 60 years. This far exceeds the spike of the early 2010s, which led to bread riots in the Middle East that helped bring about the Arab Spring and the still-simmering civil war in Syria. “It’s a core food,” Nelson says, “and when you double its price, it just changes everything.”

I recently spoke to Nelson about what Russia’s invasion of Ukraine means for a crop that provides about a fifth of the world’s food calories.

This interview has been condensed and lightly edited for clarity.

Your book focuses on inflection points in the evolution of the global food system since the mid-18th century, with wheat as the central focus. Are we at one of those points now?

The Byzantine Empire at its peak went from the Strait of Gibraltar to the Strait of Hormuz. And that’s where we’re going to see the food problem now, because the people in this region eat wheat in one form or another—as noodles, or, in North Africa and the Middle East, as bread. It’s a core food, and when you double its price, it just changes everything.

Let’s go back a bit. How did empires handle their breadbasket regions before Catherine II (also known as Catherine the Great) set her sights on Ukraine in 1768?

Before Catherine the Great, the Roman and other empires tended to have an inner ring, which is where the food came from. Grain and other foods converged on the central city, where production of leather and pottery and other goods take place. These goods would be exchanged for grain. And the grain was then used to feed the empires’ armies.

And then the physiocrats [18th-century French economists who believed that agriculture was the source of all wealth], who learned a lot from Chinese ideas of economics, decide that grain production is the core of an empire’s value, and that you can actually make an empire work by expelling grain. You sell the grain to the outside world, and that makes your empire great. Catherine embraced their ideas. She pursued them by continually invading Ukraine and then dumping its grain into the Black Sea for sale to Europe. The physiocratic way makes for a different kind of empire—one where wealth concentrates at the edges rather than at center. That’s why the richest people in the old Russian Empire were in Odessa and other cities along the Black Sea, and not the traditional places like St. Petersburg and Moscow.

“All empires have to stick together to share their food. Otherwise, it’s chaos and revolution.”

Was part of the idea to create dependency among rivals—to make, say, Europe and the Ottoman Empire dependent on Russia for food?

Well, the goal was to bring in foreign exchange—gold and silver brought into the capital then makes your capital great and funds your army. I don’t think the physiocrats had dependency in mind initially, but [their program] does have this sort of disarming effect—as empires come to depend on one another, invading other empires starts to make less sense. You could argue that that’s part of the reason we start to see peace after the Napoleonic conflict in Europe [1792-1815]. And then, as I say in the book, the Irish potato famine [1854-’51] makes it absolutely vital that all empires have to stick together to share their food. Otherwise, it’s chaos and revolution.

Of course, the peace didn’t last. And another empire with physiocratic ideas—this one based on the eastern seaboard of North America, rapidly grabbing fertile land to its west—rose to challenge Russia’s dominance of the European wheat market. You argue changes in the global wheat trade are at the heart of events that shaped World War I, the Russian Revolution, and the rise of the Soviet Union. Here we are today, with Ukraine again under siege and the region again at the center of the wheat trade. Where do you see things going?

Much of that wheat goes to North Africa, the Middle East, and Southeast Asia—places like the Philippines, which are highly dependent on foreign grain for people’s survival. And it’s used in many forms. It’s in Nigerian noodles, it’s in Egyptian baguettes, and it’s in the Algerian flatbread. These are places where something like 30 to 40 percent of average household expenditures go to food. And so, a doubling of price in this short amount of time is going to be chaos, just like [the price hikes of the early 2010s] had something to do with Arab Spring. The blocking off of Black Sea wheat flows because of the war is going to mean starvation. Starvation may be too strong of a word, but certainly household collapse in much of North Africa and the Middle East. And then on top of that, there’s the Covid pandemic and a drought in Algeria and Morocco. It’s going to cause so much pain.

“The blocking off of Black Sea wheat flows…it’s going to cause so much pain.”

The central character of your book is Alexander Parvus, a largely forgotten Ukrainian grain trader, communist, anti-imperialist intellectual, and mentor to Russian revolutionaries Lenin and Trotsky, as well as to the Polish-German radical Rosa Luxemburg. You argue that Parvus’ insights on the grain trade, and connections in Russia and Germany, played pivotal roles in the course of World War I and the Russian Empire’s collapse. What would Parvus think of the present moment?

I think he’d say that when we see tanks in Ukraine, it won’t be long before we’re going to see tanks in lots of other places. But not invasions: tanks being used against people who are rioting in the streets. There have already been a lot of peaceful marches about food prices. I see a kind of Byzantine Empire redo or Ottoman Empire redo, where you’ll see conflicts over bread prices lead to street violence, and then protests, and potentially revolution. In 2011, a lot of us were excited about Arab Spring, but the result over the long term was pretty terrible because of the amount of military force that states can now use against their populations, that they couldn’t do in the 1920s, or even the 1950s. The kind of impunity states have to rough up their own citizens and kill their own citizens to maintain the peace.

But Parvus would be optimistic, I suppose, because he would know everyone—he would have the cell phone numbers of all of the activists in North Africa and in the Middle East and elsewhere, and would know how to capitalize on the crisis. He would have very practical suggestions for how to revolutionize those states. I’m a historian, so I don’t have those cell phone numbers. I do think this is a time of revolutionary possibility. But given what happened at Arab Spring, I also worry about the casualties.

And my biggest fear over the very long term is that we go back to some sort of world in which there is not a tremendous exchange of ideas and objects and commodities around the world. The longest term problem is global warming. The opportunities for say, nuclear-fusion power and other innovations are very exciting, but they need a massive international collaboration. And if that starts to break down, and we’re back into the kind of medieval system of everybody defending their own territory, I worry that in the very long term, none of us will be ready for the chaos of global warming.

To paraphrase Faulkner, it sounds like the past you document in Oceans of Grain isn’t dead; it’s not even past.

In fact, the 40 mile corridor of Russian tanks leading to Kyiv lies on one of the key paths for getting Russian grain to the Black sea.