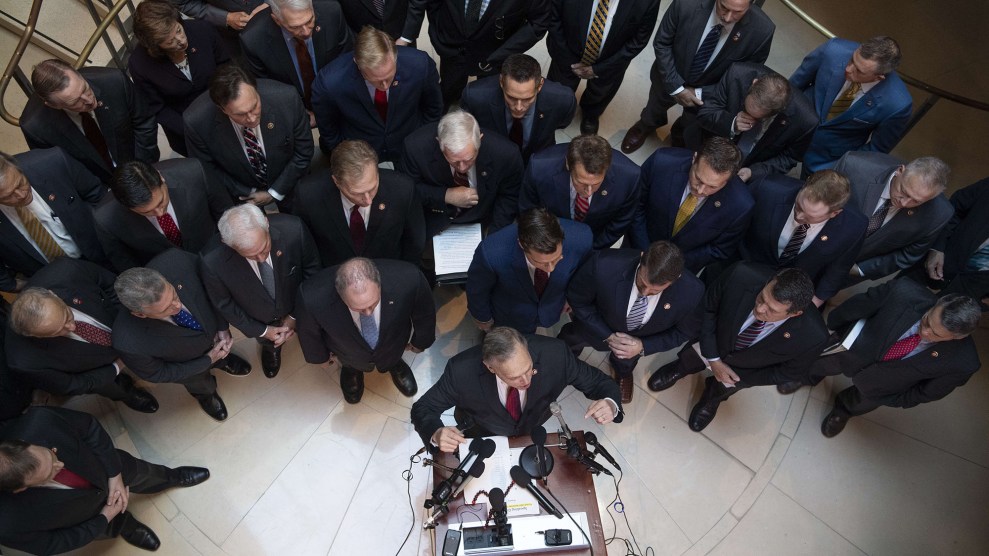 When a group of Republican congressmen led by Florida Rep. Matt Gaetz crashed a House impeachment hearing Wednesday, it was hard not to think of a specific historical parallel: The image of several dozen middle-aged white men in suits shutting down a closed-door meeting brought to mind the infamous “Brooks Brothers Riot” of 2000, when a mob of Republican aides—including Trump confidante Roger Stone—stormed a Miami-Dade County canvassing board meeting to physically halt the presidential recount.

But you don’t even have to go back that far to put what happened Wednesday into context. The Gaetz crusade feels familiar because it’s the kind of brazen stunt that Republican state legislators pull off all the time—blowing up the traditions of good governance and betting that the benefits they reap will be worth the backlash. They’re usually correct.

Last month in North Carolina, Republicans managed to override a Democratic governor’s budget veto by lying to Democratic legislators about the day’s vote schedule. In June, Republican senators in Oregon fled to Idaho in order to kill a proposed cap-and-trade bill—days after threats from a sympathetic militia group shut down the state capitol. West Virginia Republicans impeached the entire state supreme court in 2018, just because they could. Arizona Republicans packed their own state supreme court this year, just because they could. When a Democrat was elected governor of North Carolina in 2016, Republicans pushed through legislation in the lame-duck session to strip him of his powers. Wisconsin Republicans did the same thing two years later.

State legislatures are laboratories of democracy where highly trained scientists (OK, a surprisingly high number of them are car salesmen) devise increasingly brazen ways to wield power. The House Republican caucus is filled with former Republican state legislators—like Gaetz—and one lesson Republican state legislators have learned time and again over the last decade is that rules and norms are only as sturdy as the willingness and capacity to enforce them. By noshing on pizza in a secure meeting room while a witness waited to give testimony, Gaetz et al. were operating with the blessing of House Minority Leader Kevin McCarthy (R-Calif.)—and sending a clear sign about how the impeachment battle is going to be fought. It’s a play we’ve seen before.