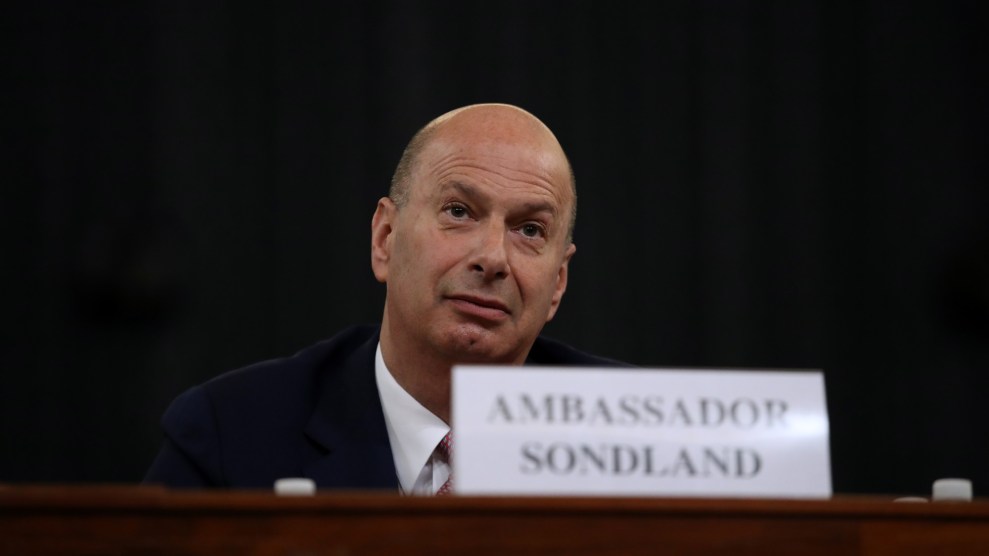 Gordon Sondland, the US ambassador to the European Union, may have given Democrats fodder for an additional article of impeachment against President Donald Trump.Drew Angerer/Getty

Before even opening his mouth Wednesday, Gordon Sondland gave Democrats even more evidence that the White House and State Department are obstructing Congress’ impeachment inquiry.

Sondland has repeatedly changed or added to his version of events, recalling new information that is damaging to Trump. Sondland is now suggesting that interference from the Trump administration is at least partly to blame for omissions in his earlier testimony.

“I have not had access to all of my phone records, State Department emails, and other State Department documents,” Sondland said, per his prepared opening statement. “And I was told I could not work with my EU Staff to pull together the relevant files.”

The White House had previously stated that it would not cooperate with the impeachment inquiry, but Sondland’s statement sheds new light on the efforts administration officials took internally to hinder witnesses who agreed to testify. “My lawyers and I have made multiple requests to the State Department and the White House for these materials. Yet, these materials were not provided to me,” Sondland said. “These documents are not classified and, in fairness, should have been made available. In the absence of these materials, my memory has not been perfect.”

Sondland’s complaints about White House interference dovetail with a warning issued Wednesday by Rep. Adam Schiff (D-Calif.), chairman of the committee conducting the impeachment hearings. Schiff noted in his opening statement that one of the articles of impeachment prepared against President Richard Nixon detailed that administration’s refusal to comply with congressional subpoenas. As part of the White House’s refusal to cooperate with Schiff’s committee, the State Department has not made any documents available.

SCHIFF warns Trump & Pompeo to top obstructing the investigation: “I remind the president that Article 3 of the impeachment articles drafted against President Nixon was his refusal to obey the subpoenas of Congress.” pic.twitter.com/5U2SDhwFqz