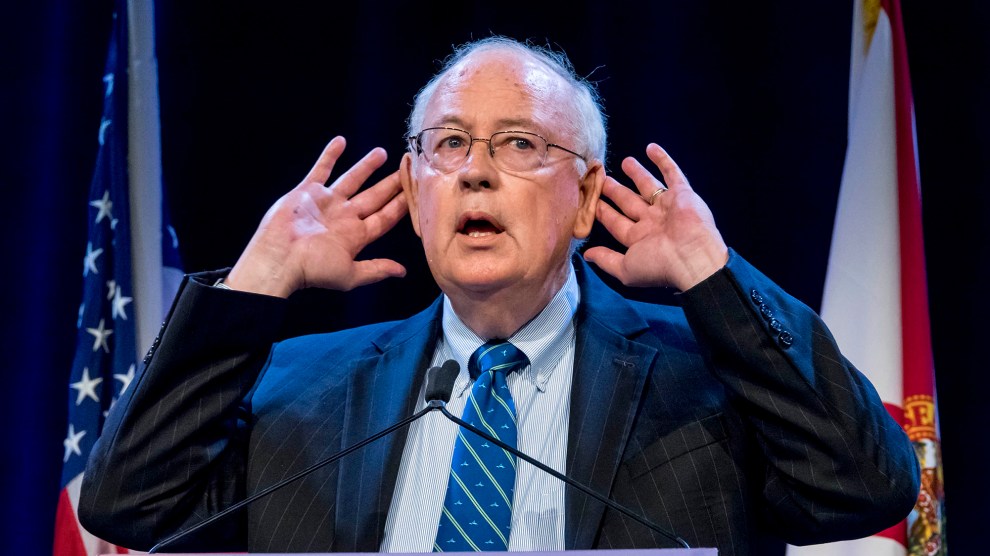 The impeachment hearings have not gone well for President Donald Trump, but have they actually changed people’s minds? Wednesday morning’s testimony from Gordon Sondland convinced one noteworthy observer that there’s evidence Trump is guilty of contempt of Congress: Ken Starr, whose famous report led to the last impeachment of a president.

“It doesn’t look good for the president, substantively,” said Starr in an interview on Fox News.

The former independent counsel went on to draw parallels between Wednesday’s line of questioning and the articles of impeachment drawn up against Richard Nixon, pointing specifically to the article concerning contempt of Congress.

“The third article of impeachment, in the Richard Nixon situation, is very clear, it’s very succinct, it’s very well done,” he said. “That just got drawn up today, thanks to Ambassador Sondland…It’s not a complaint now by the House chairman or anyone else on this committee. It is from the witness himself.”

According to Starr, Sondland’s testimony is firsthand proof that Trump obstructed the House’s ability to investigate his interactions with the president of Ukraine.

“So we have now a process crime,” Starr said. “Contempt of Congress, contempt of the House in the course of its impeachment.” He cited Wednesday’s hearing as proof that there is a litigable argument for impeachment being drawn up against the president.

“I think articles of impeachment are being drawn up, if they haven’t been already drawn up,” Starr said, adding, “This obviously has been one of those bombshell days.”

This isn’t Starr’s first impeachment rodeo. As independent counsel in 1998, he wrote the investigative report, eponymously named the “Starr Report,” that led to the impeachment of Bill Clinton.

Listen to Washington, DC Bureau Chief David Corn describe the outrageous partisan theatrics playing out inside the impeachment room, and the mounting evidence against Donald Trump, in the latest episode of the Mother Jones Podcast: