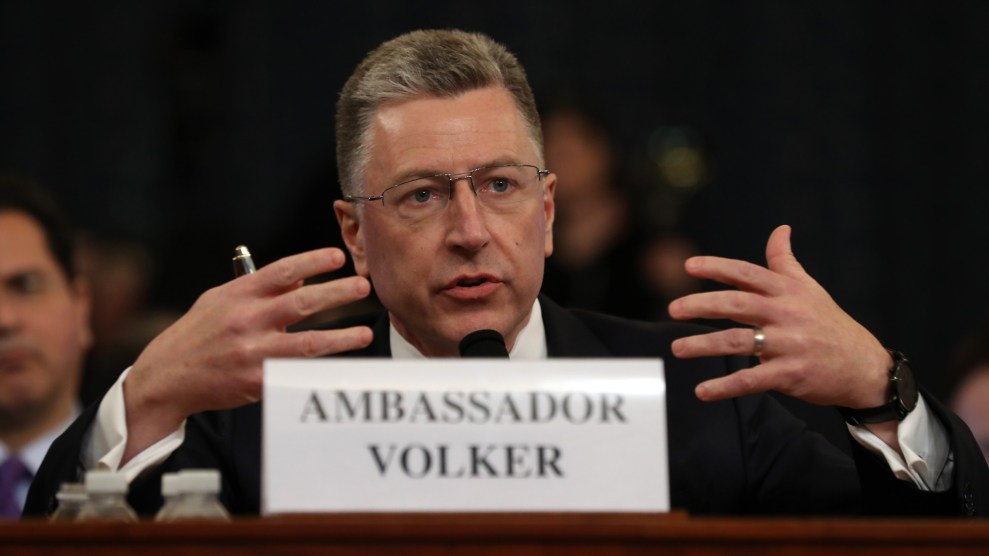 Former US special envoy to Ukraine Kurt Volker entered Tuesday’s afternoon impeachment hearing as one of the few witnesses with testimony that could potentially be favorable to President Donald Trump. Unlike other government officials who described a strategy of pressuring the Ukrainian leader to investigate Trump’s political rival, Volker told House investigators in a private deposition last month that “at no time” was he “aware of or took part in an effort to urge Ukraine to investigate former Vice President Biden.”

In his opening statement on Tuesday, Volker changed his tune. “I have learned many things that I did not know at the time of the events in question,” he said. Specifically, Volker said he was not aware of the implicit link between Burisma, the Ukrainian energy company, and the vice president’s son Hunter. “I now understand that others saw the idea of investigating possible corruption involving the Ukrainian company, Burisma, as equivalent to investigating former Vice President Biden,” Volker said. “I saw them as very different—the former being appropriate and unremarkable, the latter being unacceptable. In retrospect, I should have seen that connection differently, and had I done so, I would have raised my own objections.”

In response to questioning from House Intelligence Committee Chairman Adam Schiff (D-Calif.), Volker drove a finer distinction between what he saw as a request for one legitimate investigation, into Burisma, and one illegitimate one, into Biden. “Those things I saw as completely distinct,” Volker said. “What I was trying to do in working with the Ukrainians was to thread a needle.” Volker seemed to think he could convince Trump that Ukraine was fighting corruption without dragging Biden into it, not realizing that the two were linked. His updated testimony reflects that conclusion. “I now understand that most of the other people didn’t see or didn’t consider this distinction—that for them it was synonymous.”

Volker testifies in hindsight, he "should have recognized" that some, including Trump, saw probing Burisma "equivalent to investigating former vice president Biden." Adds, "I now understand that most of the other people didn't see this distinction. For them it was synonymous." pic.twitter.com/wXQItTseDX

To be clear: Volker knew of Hunter Biden’s role on Burisma’s board and understood that the former Ukrainian top prosecutor, Yuri Lutsenko, had pushed a narrative in the United States that Burisma paid Hunter Biden to influence his father. These allegations “were themselves self-serving, intended to make [Lutsenko] appear valuable to the United States, so that the United States might weigh in against his being removed from office by the new government,” Volker said last month, adding that the allegation of wrongdoing by Joe Biden “simply has no credibility to me.”

Knowing this fact, Volker seemed to ignore Hunter Biden’s relevance to Burisma and assume Trump’s interest in it was a good-faith attempt to root out corruption in Ukraine. That explanation struck some commentators on Twitter as a cover for Volker’s failure to oppose Trump’s Ukraine policy, which most other impeachment witnesses have characterized as an abuse of power designed to enlist Ukraine’s help in damaging a political opponent.

And then presumably either it would serve Trump's purposes without getting Volker's hands dirty (because Trump could spin a Burisma investigation into whatever he wanted) or Trump would just … back down, I guess?

Volker’s appearance before the intelligence panel, requested by Republicans, is yet another sign of the way career government officials—and their reputations—have become collateral in a scandal advanced by Trump and his allies.

The odd thing is Volker had a good reputation before this, now accused of being one of Rudy’s bag men. Perhaps a sign of what happens to those to get dragged in, dragged down by forces beyond their control.