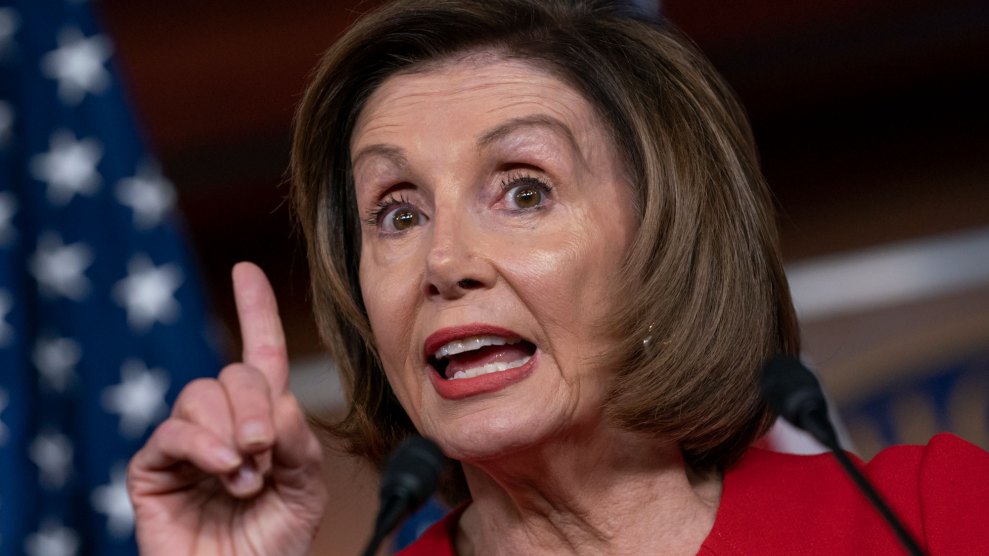 Ahead of the next batch of marathon impeachment hearings this week, House Speaker Nancy Pelosi invited President Donald Trump to answer questions from investigators instead of sounding off on Twitter.

In a Sunday interview with Face the Nation, Pelosi declined to say whether bribery would be among the articles of impeachment filed against Trump and left open the possibility that the inquiry into the president’s conduct would continue into next year. That came days after Pelosi escalated her characterization of Trump’s actions and told reporters that the testimonies heard so far “corroborated evidence of bribery uncovered in the inquiry and that the president abused power and violated his oath.”

During the Sunday interview, Pelosi suggested that House Democrats could decline to file articles of impeachment altogether if they discover exculpatory evidence, and that the president should participate in the inquiry for that reason.

“The president could come right before the committee and talk, speak all the truth that he wants if he wants,” Pelosi said.

.@SpeakerPelosi tells @margbrennan that @realDonaldTrump has “every opportunity to make his case” against being impeached. “It’s a sad thing,” she says of the president’s actions. https://t.co/E4kvNPowM0 pic.twitter.com/41q6GPl2OR

Pelosi also called the president’s actions “so much worse than even what Richard Nixon did” in the Watergate affair, adding “but at some point, Richard Nixon cared about the country enough to recognize that this could not continue.” And she called Trump an “imposter” who is “way over his head.”

The president has so far blocked members of his administration from testifying in the ongoing impeachment probe. Senate Minority Leader Chuck Schumer jumped to Pelosi’s side, telling reporters that, “if Donald Trump doesn’t agree with what he’s hearing, doesn’t like what he’s hearing, he shouldn’t tweet.” Instead, he should testify.

Meanwhile, House Republicans used the Sunday shows to shift their talking points from discrediting witnesses who lacked firsthand information about Trump’s call with Ukraine to claiming that the president’s actions weren’t wrong, since Ukraine received the aid eventually and didn’t undertake the investigations in question. In a tense exchange with Fox News’ Chris Wallace, Scalise argued that the “real bottom line” is that Ukraine received the aid, adding that Ukraine’s president said he hadn’t felt pressure over the aid.

Chief defender Rep. Jim Jordan, R-Ohio, told CBS Face the Nation that the quid pro quo at issue in the impeachment inquiry didn’t happen. “The Ukrainians did nothing to—as far as investigations goes—to get the aid released,” Jordan said. “So there was never this quid pro quo that the Democrats all promise existed before President Trump released the phone call.” Eight witnesses are slated to appear for public hearings this week, including top National Security Council official Fiona Hill and US ambassador to the European Union Gordon Sondland.

Pelosi attacked that messages head on during Face the Nation, pointing out that the military aid was only released to Ukraine after Rep. Adam Schiff heard about the whistleblower complaint on September 9.