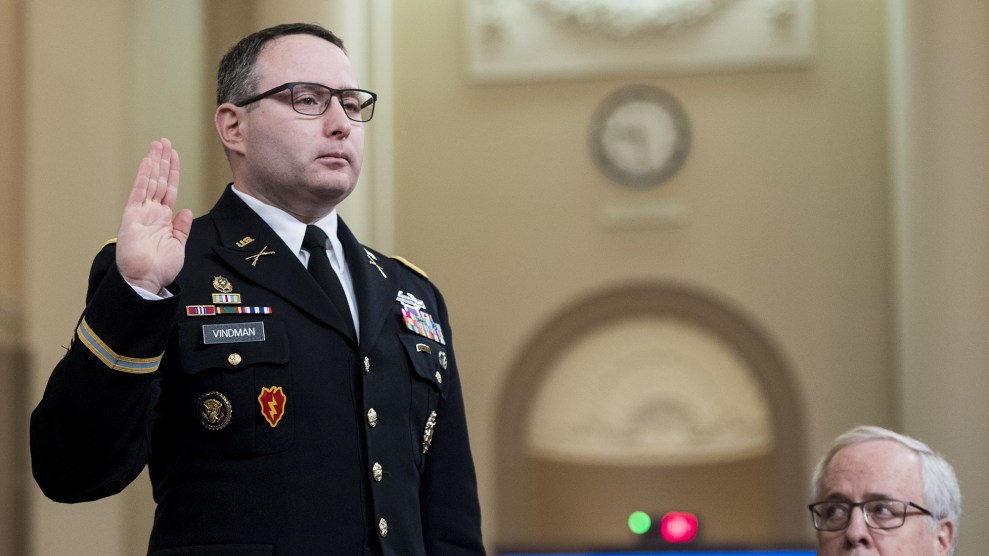 Army Lt. Colonel Alexander Vindman, director for European Affairs at the National Security Council, is sworn in before testifying in the House impeachment inquiry. Bill Clark/Congressional Quarterly via Zuma

President Donald Trump’s campaign attacked Lt. Colonel Alexander Vindman as he testified during Tuesday morning’s impeachment hearing. Using one of its Twitter accounts as the hearing unfolded, the campaign sought to undermine Vindman’s integrity and paint him as part of a deep-state coup leaking information to overthrow the president—a strategy echoed by Republicans across Washington in the lead-up to Vindman’s testimony.

Alexander Vindman is an unelected bureaucrat who was upset that President Trump was leading foreign policy instead of sticking to Vindman’s talking points.

He complained that what President Trump said on the July 25 call "was not in the preparation material that I had offered.”

Alexander Vindman’s supervisors had serious concerns about his judgement, and testified that others raised concerns that he improperly leaked information.

Tim Morrison: “I had concerns about Lieutenant Colonel Vindman’s judgment.”

Vindman is a Purple Heart recipient who serves as the top Ukraine expert on the National Security Council. But ever since Vindman testified behind closed doors last month, Trump and his allies have sought to discredit him as someone disloyal to the president. Trump called Vindman a “Never Trumper witness.” Fox News’ Laura Ingraham described him as “working inside the White House, apparently against the president’s interests.” John Yoo, a former Justice Department official under President George W. Bush, even suggested without evidence that Vindman had committed “espionage.”

Those attacks were ramped up again on the eve of Vindman’s public testimony. “A significant number of bureaucrats and staff members within the executive branch have never accepted President Trump as legitimate and resent his unorthodox style and his intrusion onto their ‘turf,’” Sen. Ron Johnson (R-Wis.) wrote Monday in a letter to House Republicans. “They react by leaking to the press and participating in the ongoing effort to sabotage his policies and, if possible, remove him from office. It is entirely possible that Vindman fits this profile.”

The Republican counsel for the House Intelligence Committee, Steve Castor, also used his time at Tuesday’s hearing to raise questions about Vindman’s loyalty. Vindman’s father brought his family to the US from the Soviet Union as refugees nearly 40 years ago, a fact that Vindman raised in his opening statement. But Castor raised an incident in which a Ukrainian official offered Vindman the job of defense minister in Ukraine. Vindman laughed it off as an absurd offer and possibly a joke, and he made clear that he turned it down.

Castor asks about Vindman being offered Ukrainian Minister of Defense earlier this year. He says he turned it down.

VINDMAN: "I'm an American. I came here when I was a toddler. I immediately dismissed these offers. Did not entertain them … the whole notion is rather comical.

The attacks on Vindman have created worries about his security.

NEW Army is ready to relocate Lt. Col Alex Vindman and his family to an Army base to protect him. Stepped up patrols of his home and security assessment come after @realDonaldTrump & GOP allies have attacked impeachment witness.https://t.co/iM0Pa6PPD9

This isn’t the first time a witness in the impeachment inquiry has been smeared in real time. On Friday, Trump himself used Twitter to attack former Ambassador Marie Yovanovitch while she testified. But the attacks on Vindman appear to be part of a more coordinated strategy to discredit a key witness.