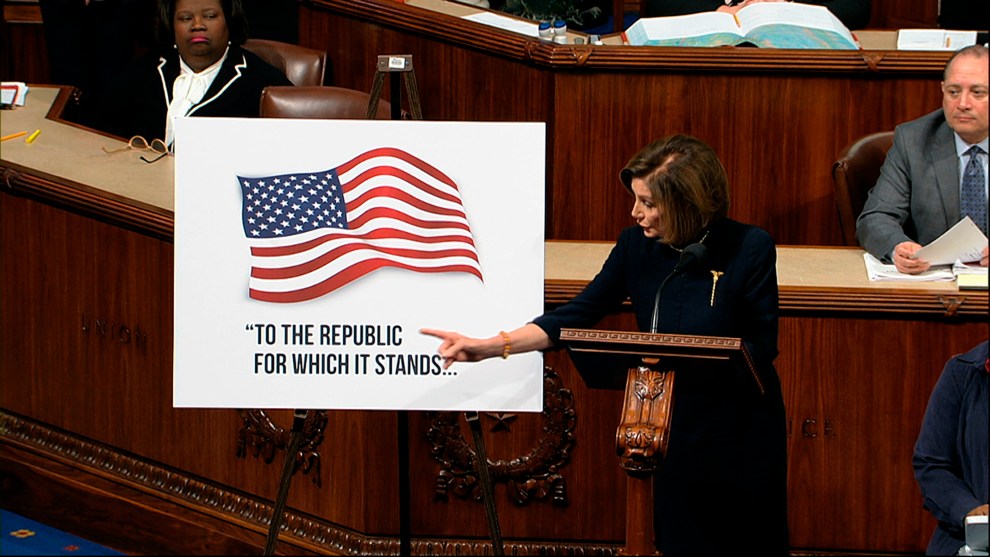 Clearing the final procedural hurdles in the House of Representatives’ impeachment process, Speaker Nancy Pelosi (D-Calif.) on Wednesday announced the opening of the last stretch of debate before the chamber’s historic vote on whether to impeach President Donald Trump.

“We gather today under the dome of this temple of democracy to exercise one of the most solemn powers that this body can take: the impeachment of the president of the United States,” Pelosi said, standing beside a poster of a billowing American flag above an excerpt from the Pledge of Allegiance: “To the republic for which it stands…”

Pointing to the poster, Pelosi said, “The republic for which it stands is what we are here to talk about today.” Then, with a nod to Benjamin Franklin, “A republic, if we can keep it.”

“Very sadly now, our founders’ vision of a Republic is under threat from actions from the White House,” she continued. Perhaps rebutting Trump’s Impeachment Eve accusation that her demeanor constituted a “false display of solemnity,” she said, “That is why today, as speaker of the House, I solemnly and sadly open the debate on the impeachment of the president of the United States.”

.@SpeakerPelosi: "For centuries, Americans have fought and died to defend democracy for the people. But, very sadly now, our founders’ vision of a Republic is under threat from actions from the White House…If we do not act now, we would be derelict in out duty." pic.twitter.com/YyQ4w9wB3B