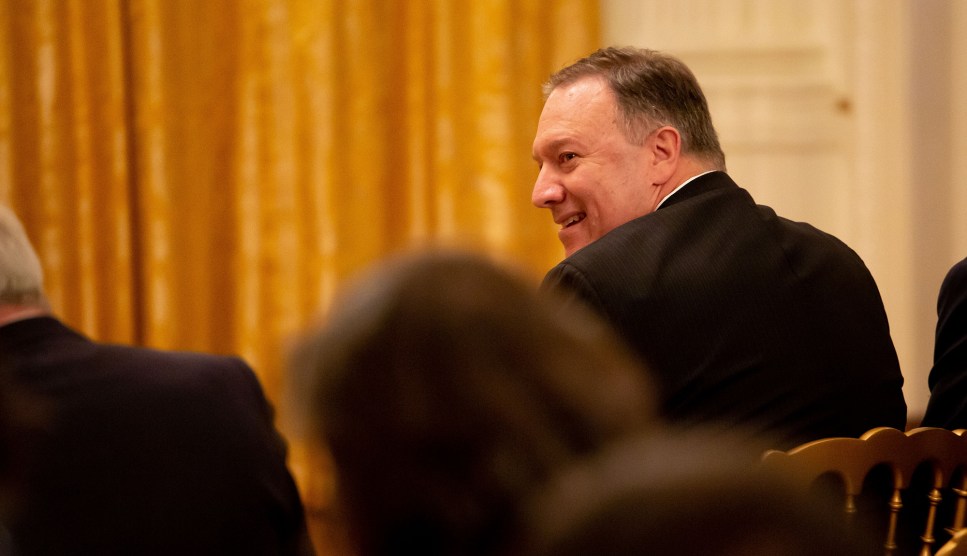 On Friday, NPR reporter Mary Louise Kelly revealed a loony interaction she had with Secretary of State Mike Pompeo following an interview in which she had the temerity to ask about the scandal at the heart of the President’s current impeachment trial, one in which Pompeo himself has been implicated.

NPR's Mary Louise Kelly says the following happened after the interview in which she asked some tough questions to Secretary of State Mike Pompeo. pic.twitter.com/cRTb71fZvX

“He asked if I could find Ukraine on a map. I said yes, and he called out for aides to bring us a map of the world with no writing,” she said. “I pointed to Ukraine. He put the map away. He said, ‘People will hear about this.'”

I have some questions about this: How long did it take the aides to find a map of the world with no words on it? Did they print it out? Do they have it handy? Is this a quick quiz Pompeo often imposes on visitors? Separately, and most importantly, does Trump’s Secretary of State think this is appropriate behavior?

On Saturday, Pompeo released a statement that didn’t explain the provenance of the wordless map but does shed light on his views about professionalism. It…isn’t good.

Secretary of State Pompeo responds to NPR reporter Mary Louise Kelly recounting him cursing at her and berating her for asking about Ukraine with this statement. It’s something else: pic.twitter.com/C9AWuxa4qi

A bunch of Trumpian nonsense about the media being the real villain is not surprising with this administration, but the last line is what makes this really blow my mind.

“It is worth noting that Bangladesh is NOT Ukraine.”

Pompeo is saying that Mary Louise Kelly, who graduated from Harvard with degrees in French and European Studies, has a masters from Cambridge in European Studies, and served as NPR national security correspondent for years, didn’t know where Ukraine was. He’s also saying she lied in her statement yesterday. There is no reason on earth to believe Mary Louise Kelly does not know where Ukraine is. It’s even more preposterous that she confused it with Bangladesh! There is also no reason to doubt her account of the event. But these details naturally do not impede Pompeo from doubling down and attacking her.

A man after Trump’s heart!

Here is the interview that set Pompeo off. The least he deserves is that you give it a listen.

Here is our full interview with Secretary of State Mike Pompeo. It's worth a listen. https://t.co/3BQh3Q7lWV