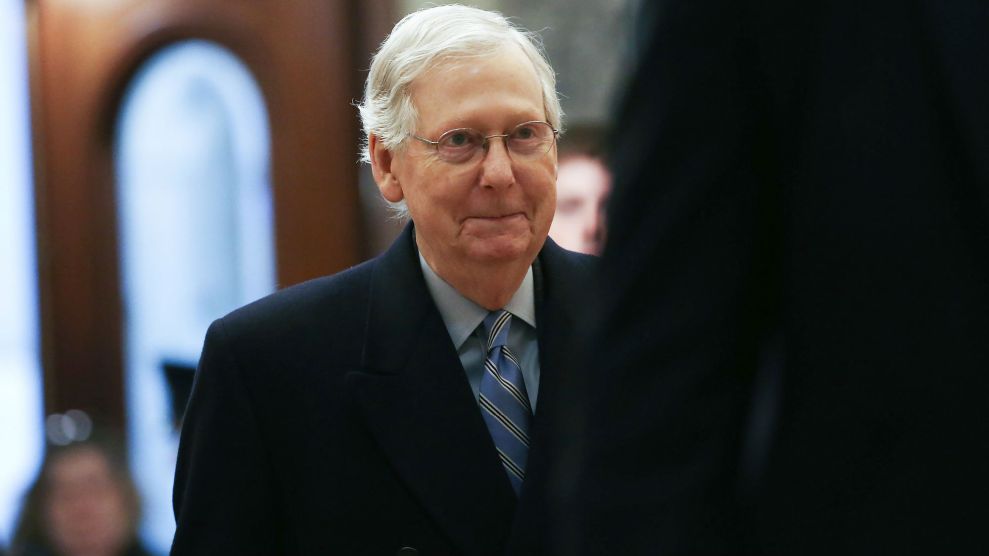 Republicans were always going to acquit President Donald Trump in his Senate impeachment trial, no matter of how much damning information they received. So why consider new evidence that would only confirm his guilt?

That is the logic of Sen. Lamar Alexander’s Twitter thread last night explaining his decision to oppose any witness testimony about Trump’s scheme to pressure Ukraine to investigate former Vice President Joe Biden. The retiring Tennessee Republican wrote that the Democratic House impeachment managers had “proved” that Trump is guilty of withholding military aid to help his reelection campaign. But Alexander argued that Trump’s “inappropriate” actions do not deserve removal from office, so gathering more evidence would be a waste of time.

There is no need for more evidence to conclude that the president withheld United States aid, at least in part, to pressure Ukraine to investigate the Bidens; the House managers have proved this with what they call a “mountain of overwhelming evidence.” 3/15

Sen. Lisa Murkowski (R-Alaska), who also had mulled voting in favor of hearing witnesses, offered a similar rationale for moving on. “I have come to the conclusion that there will be no fair trial in the Senate,” she said in a statement Friday, which pointed the blame at the Democrats. “I don’t believe the continuation of this process will change anything.” Only two Republican senators, Mitt Romney (R-Utah) and Susan Collins (R-Maine), have said they will vote to hear witnesses, though their stance will not affect the result of the final vote.

Most Republican senators have in effect accepted the Kafkaesque claim by Trump’s lawyers that Democrats did not assemble enough evidence to show any presidential wrongdoing, and therefore have no basis to seek more evidence. A key premise of Trump’s defense is a claim that no witness has testified that the president had connected military aid for Ukraine with investigations that would benefit him politically. This is technically true—but only because Trump’s legal team and Senate Republicans have blocked such testimony. Yet the president’s lawyers repeated that claim even after news broke that former National Security Adviser John Bolton was prepared to testify that Trump had made such an explicit connection in an August meeting, and despite public comments in which acting White House Chief of Staff Nick Mulvaney said Trump had tied the release of security aid to investigations. In short, Trump’s defense rested on a claim that multiple eyewitnesses would likely have contradicted if they testified.

Senate Majority Leader Mitch McConnell (R-Ky.) and his caucus realize that a large majority of Americans think they should allow witnesses to testify, and that an acquittal without doing so will outrage many voters. But they are betting that the political backlash from a rush to judgement will be less severe less than the fallout that could come from allowing Bolton, Mulvaney, and others to testify under oath.

At the heart of this calculus is the argument advanced by a trio of Republicans facing reelection races this year. The Wall Street Journal reported this week that Sens. Cory Gardner of Colorado, Martha McSally of Arizona, and Thom Tillis of North Carolina made an electoral argument for blocking witnesses while speaking in a caucus meeting. “Gardner said a longer trial would lead to more Democratic attacks,” the report said. These senators will be on the ballot with Trump this year in presidential battleground states. As they face strong Democratic challengers, these senators must court Trump supporters whose backing they need to survive. Instead of the slow burn of a longer Senate trial, they seem to prefer getting the pain over with quickly.

When Alexander tweeted out his statement on Thursday night, all but assuring a trial without witnesses, some reporters called it a win for McConnell. But his victory could be short lived. The majority leader might be right that conducting a sham trial is a smaller problem for Republicans than allowing a real trial to proceed. But it is still a problem for Republicans. Whether blocking witnesses proves to be a GOP victory will depend on how angry voters are in November.