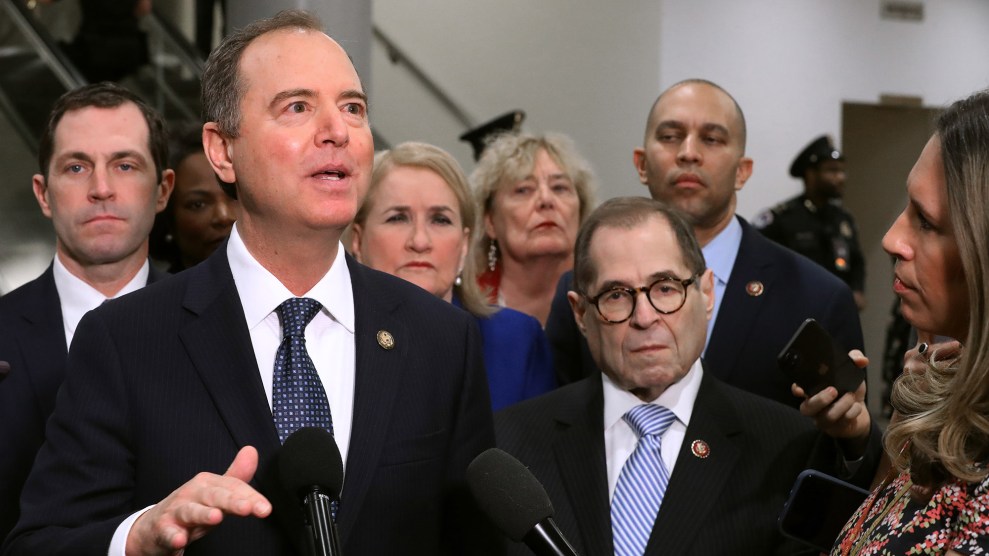 On the second day of the impeachment trial of President Donald Trump, lead House impeachment manager Rep. Adam Schiff (D-Calif.) summarized the argument for impeachment and rebuked the president for “abusing the power of his office to seek help from abroad to improve his reelection prospects at home.”

“President Trump pressured the president of Ukraine to publicly announce investigations into two discredited allegations that would benefit President Trump’s 2020 presidential campaign,” Schiff said. “When the Ukrainian president did not immediately assent, President Trump withheld two official acts to induce the Ukrainian leader to comply: a head of state meeting in the Oval Office, and military funding.”

Trump’s gravest misstep, according to Schiff, was his withholding of military aid from Ukraine. “President Trump withheld hundreds of millions of dollars in military aid to a strategic partner at war with Russia to secure foreign help with his reelection,” he said. “In other words, to cheat.”

He continued, “The president used official state powers available only to him and unavailable to any political opponent to advantage himself in a democratic election. His scheme was undertaken for a simple but corrupt reason: to help him win reelection in 2020. But the effect of his scheme was to undermine our free and fair elections and to put our national security at risk.”

.@RepAdamSchiff: “We are here today in this hallowed chamber undertaking this solemn action for only the third time in history because Donald J. Trump, the 45th president of the US, has acted precisely as Hamilton and his contemporaries feared.” #ImpeachmentTrial pic.twitter.com/tQyNs8Jbq1