STUPID RATINGS AGENCY TRICKS….In an obvious effort to avoid being tarred and feathered by an angry mob, Wall Street apparatchik Noah Millman engages in a lengthy self-criticism session tonight regarding “structured finance” — you know, mortgage securitization, credit default swaps, synthetic CDOs, and all the other financial weapons of mass destruction that have helped melt down the world lately. “I thought it would be of interest,” he says, “to relate two stories from my long career in structured finance, one that may help explain why, if you asked me in 2004 or 2005, 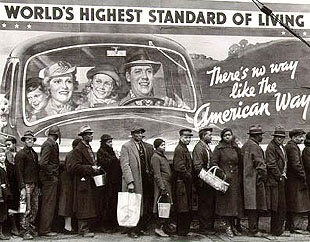 I would have staunchly defended structured finance technology as having real social benefit and why, by a couple of years later, it was clear to anyone looking honestly at the business that something had gone very wrong.”

Yes! It would be! And all kidding aside, we’ve actually seen very little about this stuff written by the people who actually engineered it all. So it really is interesting.

Noah promises to tell us about the “promise and peril” of structured finance, and the “promise” part has to do with the way CDOs and CDS helped make it possible for banks to expand lending in the dismal wake of the Enron/Worldcom/dotcom bust in 2002. That’s fine, but let’s be honest: it’s not what we’re interested in, is it? We want to hear about how structured finance destroyed the planet. So let’s skip right to the “peril” part.

And it’s pretty good. Noah tells the story of the constant-proportion debt obligation, aka CPDO, a cute little invention of the end stage bubble industry. In a nutshell, here’s how it worked: the issuer bought up a bunch of BBB securities, and every six months they sold off both the poor performers and the good performers, replacing them with more BBB securities. The idea was to keep the yield roughly the same over time, but since they lost money on the junk and made money on the good stuff, on average they came out even. Or even took a small loss, what with fees and all. So why bother?

Enter the rocket scientists. Even BBB securities are unlikely to default in the short term, which means that the CPDO is basically pretty safe since it sells stuff off every six months. And since it’s safe, the issuer can borrow lots of money against it to invest in longer-term bonds. That’s called leverage, my friends:

And, if you can get a high enough degree of leverage, the excess in current yield from the differential between where you borrow and the yield on your portfolio should more than pay for the cost of rolling out of your losers every six months. And if you do that successfully, you’ve got a trading strategy that never loses principal, but has a surprisingly high expected yield. Sound good?

Well, it sounded great to the ratings agencies, who blessed this strategy by giving it a AAA rating.

How did they justify that AAA rating? By looking at the historic cost of rolling credit derivatives on indices of investment-grade corporate issuers, which generally have a high-BBB rating. These had been around for about three years when the first CPDOs were rated, and the roll had never cost more than 3 basis points. Factoring in that cost, at a leverage of 15-to-1, and using historic 6-month default rates for the portfolio (since the index would be rolled every six months), the proposed trading strategy would never lose money. Hence a AAA rating.

Let me reiterate that, just to drive the point home. The ratings agencies said: you can take a BBB-rated index, leverage it 15-to-1, and follow an entirely automatic trading strategy (no trader discretion, no forecasting of defaults or anything, just a formula-driven adjustment to the leverage ratio and an automatic roll of the index), and the result is rated AAA.

….When I first heard about this product, I thought: whichever agencies rated this thing have lost their minds. When people asked me whether it made sense as an investment, I said: it’s an outright fraud. You’re practically guaranteed to lose money. I never bought or sold one of these things myself, and neither did anyone else in our group. But the existence of such a ridiculous product should have been a wake-up call about just how divorced from reality the agencies were. And if they were out to lunch on something as straightforwardly absurd as the CPDO, how out to lunch were they on other products, ones that were far more significant to the markets and the economy, where the absurdity of their assumptions was less-obvious.

The moral of this particular story is: back during the bubble the ratings agencies were idiots. And today, they might even be worse. Read the whole thing for more.