The last great leap forward for unions was during World War II, and the last great expansion of the American middle class followed in its aftermath. 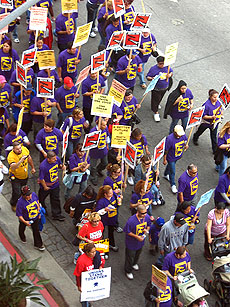 In contrast, the most recent expansions — which have largely occurred in the absence of unions — have benefited America’s rich.

Yep. And if there’s one thing you definitely can’t blame our current economic crisis on, it’s spiraling middle class wages. In fact, there’s a pretty good case to be made that stronger middle class wage growth would have reduced the motivation to borrow so heavily, which is a big contributing factor to the depth of the recesson we’re facing now. (It also might have kept a little more money out of the hands of idiot Wall Street bankers, which would have been no bad thing either.)

Unions are hardly a panacea for middle class wage growth, but they can help. I’m pretty open to the idea that Mickey Kaus has been writing about lately, namely that mushrooming work rules are a specific problem for American-style unionization, and I’d be happy to see good-faith efforts to address reform in that area. Unfortunately, good faith is in very short supply in the anti-union camp. Conservatives flatly oppose anything that gives labor any additional bargaining power, full stop, and that doesn’t leave much room for compromise. So unions it is. Especially in the service sector, they’re pretty much the only idea on the table for seriously addressing low-end wage growth, and that means I’m for ’em.