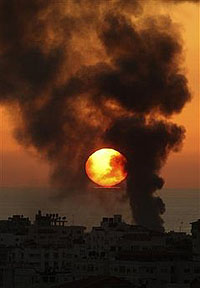 AND THEN WHAT?….Marc Lynch went to a lecture this morning given by Israel’s Ambassador to the United States, Sallai Meridor:

It was a profoundly dismaying experience. Because if Ambassador Meridor is taken at his word, then Israel has no strategy in Gaza.

Asked three times by audience members, Meridor simply could not offer any plausible explanation as to how its military campaign in Gaza would achieve its stated goals….As to a political strategy tied to the military campaign, nothing. No guidance as to whether Israel would re-occupy Gaza, or on what terms it would accept a cease-fire. No thoughts as to whether the campaign would cause Hamas to fall from power or help the Palestinian Authority regain political power.

….In short, Meridor quite literally offered no strategy beyond hitting Gaza hard and hoping for the best. “In terms of creating damage we are certainly on the right path,” noted the Ambassador. Few would disagree with that assessment, at least. But some might hope that the bloody, battered path might actually be leading somewhere.

To be honest, this seems to be true of most wars these days: hit ’em hard and hope that something shakes loose. But while that may have been a plausible strategy in colonial wars a hundred years ago, it doesn’t seem to work so well anymore. I doubt very much that it’s going to work for Israel this time around either.