GOING BACK FOR MORE….Last night I read in the New York Times that a mere 20 months after triumphantly nationalizing several massive oil projects in the Orinoco Belt, Venezuelan president Hugo Chávez is inviting foreign oil companies back in to bid on a few new projects. 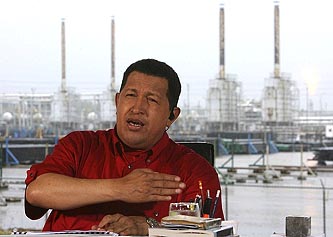 The plummeting price of oil explains Chávez’s U-turn, but on the other side of the table I had about the same reaction as Dan Drezner:

The willingness of the oil companies to re-enter the fray in Caracas is more intriguing. In recent years there has been a lot of loose talk about how holders of capital also hold the levers in a bargaining situation with debtors, because the latter must do what they can to please the former.

In fact, recent research suggests that when debtors violate their contracts, the price to be paid is often much less than anticipated. Chávez certainly seems quite aware of this fact.

What puzzles me is that Chávez’s reputation does suggest that the moment oil prices go up again, he’ll reverse course yet again and put the screws on his foreign investors. I understand that exploration opportunities are scarce, but the willingness of these firms to go back is item #345 on Things I Do Not Understand About Energy Markets.

Count me among the puzzled too. I suppose the companies who are bidding on the Orinoco projects may be counting on Chávez failing in his attempt to become president for life, and are thus figuring they won’t have to deal with him in the long term. And as the Times points out, oil companies are pretty desperate for projects these days since there just aren’t many big new fields left to open up.

Still, it seems kind of masochistic, doesn’t it?