WHAT OBAMA DID….Our obsessive modern media environment — talk radio, 24/7 cable news, constant blog chatter, etc. — turns every molehill into Mt. Everest.  Every bill is a cliffhanger.  Every amendment is a fight for the future of the party.  Every procedural vote is a referendum on the president and his entire program.

Except, you know, it’s not. 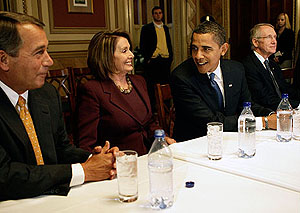 The fantastic amount of sturm und drang from all sides to the contrary, here’s what happened with the stimulus bill.  (1) Obama recommended a $775 billion package.  (2) The House futzed around with it a bit.  (3) The Senate futzed around a little more.  (4) The final confererence report ended up within a few percent of what Obama asked for in the first place: Slightly less spending, but more front-loaded; about the same amount of tax cuts; and the addition of a tweak to the AMT, which would have happened anyway later in the year.  Some of the net changes were good (more rail, more energy spending) and some were bad (housing subsidies, state aid cuts), but in the grand scheme of things this is pretty small potatoes.  Mark Kleiman notes that now that the sound and fury have died away, the media has finally figured out what happened:

Espo’s [AP] story carries no hint of the earlier widely-repeated nonsense about how the failure of Republicans to vote for the bill even after it had been somewhat tailored to meet their original objections constitutes a defeat for Obama’s post-partisan ambitions. It seems far more likely to constitute an act of collective political self-immolation. The stimulus bill and Obama are both quite popular, and the Republicans just the opposite. The public doesn’t seem to have had nearly as much trouble as, for example, the editorial page of the Washington Post in figuring out which side is extending the hand of friendship and which side is biting it.

I would have thought that, by now, smart observers of the political scene would have developed some hesitancy about claiming that the Obama machine has blundered. Apparently not yet. But Ron Brownstein puts his finger on what seems to me the key fact about Obama as a politician: “flexible about tactics and unwavering in his goals.”

And, I would add, patient. Obama is a low-discount-rate player in a very high-discount-rate town. And he understands what the pundits don’t: this is a repeat-play game. His summary of the stimulus bill: “not 100 percent of what we would want … but a very good start on moving things forward.”

Obama has obviously had a few stumbles during his first month in office, but aside from losing Tom Daschle none of it was serious.  (The Commerce Department?  Please.  Sure, it’s a little embarrassing to lose two candidates in a row, but in the end, nobody cares a whit.)  On the plus side, his team is in place, he’s passed both a healthcare bill and an anti-discrimination bill, and he’s now got the single largest stimulus bill in the history of the country sitting on his desk waiting for his signature.  And he still has 205 weeks left to go in his first term.  Were you really expecting very much more from the first three?