Newspapers have been dropping like flies recently, and because of that a lot of chatter in reporting circles these days revolves around the possibility 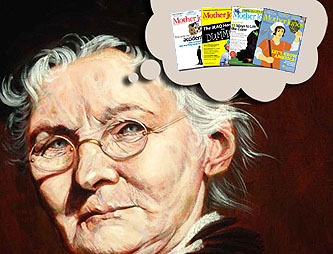 that serious journalism in the future will mostly be done by nonprofits, funded by foundations and grants. Today the New York Times writes about a San Francisco-based magazine that’s followed that model for over 30 years:

Mother Jones has become a real-life laboratory for whether nonprofit journalism — a topic of the moment in mainstream news media circles — can withstand a deep recession.

….Back in the fall, when the economic downturn intensified, and the plight of print publications became more dire, Mother Jones suffered, despite its position of not being in it for the money. Advertising plummeted, down 23 percent in 2008, and some of the big donations the magazine depends on didn’t come through.

Actually, things are better than that makes it sound.  Advertising is a pretty small chunk of our revenue, and overall fundraising has stayed pretty strong, all things considered:

[Jay] Harris, the magazine’s publisher, said the company met its fund-raising targets last year, although before the economic turmoil in the fall the magazine thought it would exceed goals.

But small-time donations and subscriptions have held steady at Mother Jones, to the surprise of its editors, who figured that the downturn would have taken more of a toll and that the election of Barack Obama would have a negative effect on raising money for liberal causes.

About half of the magazine’s yearly revenue is from major grants and donations. The magazine often seeks donations for specific projects, as it did in recent years to staff its Washington bureau at a time when many news organizations had been scaling back there. The bureau opened in late 2007 with eight people.

The Times failed to note MoJo’s groundbreaking hiring of new blogging staff last year, but aside from that it’s a decent piece about one possible future for investigative journalism.  Namely, us.  Check it out.