We’re still waiting for the release of many of the Bush-era legal opinions that were used to justify warrantless wiretapping, torture, and indefinite detention.  Today we got to see a few of them, including a remarkable memo written by George Bush’s own Office of Legal Counsel during the final week of his presidency:

In a memo written five days before President Barack Obama took office, Steven Bradbury, the then-principal deputy assistant attorney general, warned that a series of opinions issued secretly by the Justice Department’s Office of Legal Counsel “should not be treated as authoritative for any purpose.”

The memo, unusual for its critique of a current administration’s legal opinions, was released by the Justice Department Monday along with eight other previously secret opinions…..Attorney General Eric Holder said Monday that he planned to release as many of the Bush administration’s OLC memos and opinions as possible “while still protecting national security information and ensuring robust internal executive branch debate and decision-making.” 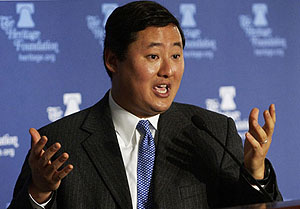 The full memo, written on January 15, is here, and retracts nine separate opinions from the Yoo/Bybee/Haynes era at the OLC.  In particular, it turns out that one of the early Yoo opinions made the risible argument that the FISA act didn’t apply to Bush’s warrantless wiretap program because the text of FISA didn’t specifically say it applied to national security matters.  The January memo calls this “problematic and questionable, given FISA’s express references to the President’s authority.”  Orin Kerr at the Volokh Conspiracy is more scathing:

If I’m reading this correctly, then, the original Yoo memos on the TSP had argued that FISA didn’t apply because there was nothing in the statute that indicated clearly an intent to regulate national security surveillance. This would have been an extremely lame analysis, though….It’s hard to read the phrase “procedures in . . . the Foreign Intelligence Surveillance Act of 1978 shall be the exclusive means by which electronic surveillance . . . may be conducted” as not clearly indicating an intent to regulate electronic surveillance in the national security area. Indeed, much of the point of FISA was to regulate that.

If I’m reading this correctly, it might explain why Senators Feinstein & Specter introduced legislation back in ’06, at the height of the legal controversy over the TSP, that would “re-state” that FISA was the exclusive means for national security surveillance. A lot of people giggled at this idea at the time: Why restate what Congress already said? However, if the Bush Administration at some point indicated to Specter and Feinstein what the reasoning was of the initial OLC memos, Feinstein and Specter would have known something we didn’t. “Re-stating” the point in new legislation could have been designed to provide the “clear statement” that the Yoo memo argued was necessary.

It’s hard to believe that even John Yoo seriously advanced this argument.  Given the plain text of the FISA statute, it simply can’t be made in good faith.  But he did.