I’ve been meaning to write posts about both 24 and Watchmen for a while, but haven’t quite gotten around to it because I don’t have anything really meaty to say.  So I’m just going to toss out a couple of offhand observations instead, mostly as an excuse to host an open thread on either or both of these fine Hollywood products.

First, 24.  It’s turned into exactly the train wreck that I was afraid of when the season started.  Back when Jack Bauer merely tortured people as part of the script, that was one thing.  Your mileage might vary on whether you felt like watching it, but in the end it was just modern-day Dirty Harryism.  Nothing to get all that worked up about.  But this season Jack isn’t just spontaneously beating up on bad guys who know where the ticking time bombs are buried.  No.  This season Jack is beating up on the bad guys as part of a premeditated strategy and then talking about it endlessly.  And so is everyone else.  The writers are no longer content to merely suggest that (in their fictional universe) a bit of extralegal torture might sometimes be justified because it gets results.  They’re bound and determined to explicate it on screen every single time it happens and demand that we, the audience, actively approve of it. 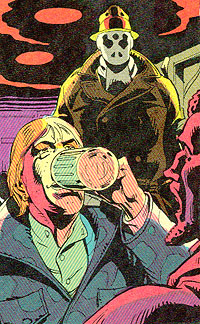 This is not only depraved, it’s lousy storytelling too.  All the usual 24 preposterousness aside, it’s made the show cringe-inducing this season.

Next, Watchmen.  Like many fans of the comic, I suppose, I’ve been waiting for it with a mixture of both anticipation and trepidation.  Anticipation, of course, because it’s a seminal comic and I’m eager to see how it gets translated onto the screen.  Trepidation because I don’t think it will translate well.  This isn’t because I think it’s “unfilmable,” or because I think Zack Snyder will necessarily ruin it.  (I’m agnostic about that.  I thought 300 was fairly entertaining, so I don’t hold that against him.)  No.  Oddly enough, it’s because I think the story is simply too absurd to survive the transition to film.  I realize that proposition is a little hard to defend, but there’s a sense in which a story that tries to treat costumed superheroes as real people is much harder to accept than one in which the essential burlesque of the superhero genre is simply taken for granted.  Once you start to interrogate the whole concept, it’s much harder to successfully suspend disbelief.

Now, obviously that didn’t hurt the comic.  (Not much, anyway.)  But I think it’s harder to pull this off on the screen, which works by default in a realist mode, than it is in a comic book, which doesn’t.  Or so it seems to me, anyway — though I cheerfully admit that the whole argument sounds kind of half-baked.  Feel free to mock me in comments.

This won’t stop me from seeing Watchmen, of course.  Maybe I’ll even see it on Friday if I can find anyone to go with me.  The question is: how many people who haven’t read the comic a dozen times will do the same?