Dahlia Lithwick writes in Slate about the insane smear campaign being waged by the wingnut right against Harold Koh, Obama’s nominee for legal adviser to the State Department: 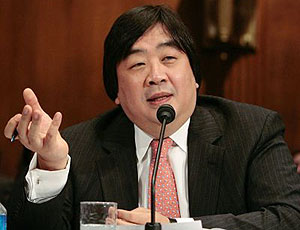 Every one of the anti-Koh rants dutifully repeats a canard that first appeared in a hatchet piece in the New York Post by former Bush administration speechwriter Meghan Clyne. She asserts that Koh believes “Sharia law could apply to disputes in US courts.” The evidence for her claim? “A New York lawyer, Steven Stein, says that, in addressing the Yale Club of Greenwich in 2007, Koh claimed that ‘in an appropriate case, he didn’t see any reason why Sharia law would not be applied to govern a case in the United States.’ “

….But, of course, Koh believes nothing of the sort. And the only real revelation here is that truth can’t be measured in Google hit counts or partisan hysteria.

….Clyne’s gross distortions of Koh’s views have gone completely unanswered in the mainstream press. You can certainly argue that ignoring the whole story signals that it’s beneath notice….[But] when moderate Americans and the mainstream media allow a handful of right-wing zealots to occupy the field in the public discussions of an Obama nominee, they become complicit in a character assassination.

The right-wing nutcase machine really does seem to have picked up from its Clinton-era follies without missing a beat.  But although Lithwick right about the moral dimensions of this kind of smear campaign, there’s also a practical aspect: it’s yet another part of the increasingly dismal Senate kabuki show that makes it harder and harder to fill high-level administration positions. It’s one thing to go through this kind of harangue to become Secretary of State, but it’s quite another to go through it to become merely a high-level aide, and as this stuff gets more and more rabid, fewer and fewer people are willing to put up with it.

So let’s knock it off.  We can’t stop the wingnuts, but we can take the wind out of their sails by taking away their platform.  After all, is there really any reason why the Senate needs to confirm the legal advisor to the State Deparment in the first place?  No?  I didn’t think so.