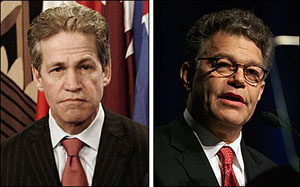 A Minnesota court court has confirmed that Democrat Al Franken won the most votes in his 2008 Senate race against Republican Norm Coleman, The Associated Press reports.

But, as the saying goes, it ain’t over til it’s over. Coleman already had said he would appeal such a decision to the state Supreme Court. He has 10 days to file.

So here’s something to watch for: how long will it take Coleman to file his appeal?  He’s known this decision was coming for a long time.  His legal team almost certainly knew the grounds on which he was going to lose.  They’ve had plenty of time to prepare their argument.  They could probably file it tomorrow if they wanted to.

But do they want to?  If they’re genuinely trying to win a Senate seat, they’ll file quickly.  After all, the faster they file, the faster Coleman can win the case and return in triumph to Washington.  But if they don’t think they can win — if they’re merely trying to stretch out a losing argument as long as possible in order to deny Franken his seat — then they’ll wait the ten full days.  Which do you think it will be?