One of the common observations of the anti-torture crowd is that, historically, torture has been used primarily to extract false confessions, not genuine intelligence. 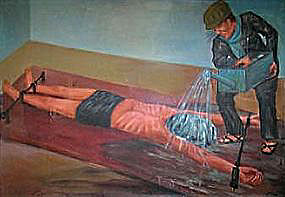 Which is really a very tedious thing to say.  After all, even if you don’t like the guy, everyone knows that George Bush was trying to prevent future attacks by al-Qaeda, not extract false confessions.  Right?

The Bush administration applied relentless pressure on interrogators to use harsh methods on detainees in part to find evidence of cooperation between al Qaida and the late Iraqi dictator Saddam Hussein’s regime, according to a former senior U.S. intelligence official and a former Army psychiatrist.

….”There were two reasons why these interrogations were so persistent, and why extreme methods were used,” the former senior intelligence official said on condition of anonymity because of the issue’s sensitivity.

“The main one is that everyone was worried about some kind of follow-up attack (after 9/11). But for most of 2002 and into 2003, Cheney and Rumsfeld, especially, were also demanding proof of the links between al Qaida and Iraq that (former Iraqi exile leader Ahmed) Chalabi and others had told them were there.”

That’s Jonathan Landay at McClatchy.  I’ll leave the parallels with the Spanish Inquisition as an exercise for the reader.